You cannot find Bacurau on any map of Brazil. That is because the town is fictional. The problem is that the residents of this small community in the northeast corner of Brazil can no longer find their town on Google Maps, or any GPS system either. Other strange things soon begin happening in Bacurau, winner of the Jury Prize at the 2019 Cannes Film Festival. Written and directed by Juliano Dornelles and Kleber Mendonça Filho, Bacurau bears more than a slight resemblance to current events in Brazil where a right-wing government has tied itself to authoritarian movements around the globe and has stacked the government with religious ideologues indifferent to protecting human rights and the environment.

Filho’s socially-conscious films “Aquarius” and “Neighboring Sounds” had a similar theme of underdogs protesting against powerful interests, but are vastly different in style. Reminiscent of Robert Redford’s “The Milagro Beanfield War” where residents of a small town in New Mexico come together to resist developers out to siphon off their water supply in order to build a golf course, the people living in the isolated community of Bacurau become idealistic defenders of their community under attack from mercenaries.

Ten years in the making, Bacurau is a western-style shoot-em-up that has plenty of blood and gore, (some unnecessary), elements of science fiction, psychotropic drug use, and a mythic struggle between outside forces and a community laboring to preserve their way of life. In the film, which we are told takes place “sometime in the near future,” Teresa (Bárbara Colen, “Burning Night”) returns home to Bacurau to attend the funeral of 94-year-old Carmelita (Lia de Itamaracá, “Blue Blood”), her grandmother and the town’s matriarch and to bring much needed food, household goods, and medical supplies to the residents of her isolated community. She is also coming back to be with her boyfriend, “reformed” gangster Pacote (Thomas Aquino, “Futuro Beach”) who is one of the key players in the narrative, though the star of the film is really the community itself.

The solemn funeral procession for Carmelita is upsetting to many people including Domingas (Sonia Braga, “Wonder”), the town doctor, who interrupts the proceeding by shouting about how evil Carmelita was but the mourners, who know her well, tolerate her behavior. When the sleazy mayor Tony Jr. (Thardelly Lima, “Divine Love”) comes to town campaigning for reelection, he delivers books, food, and medical supplies. At first he gets the silent treatment, then shouts of “go home” and “turn on the water,” a reference to his support of a private company that blocked the floodgates of a dam. A UFO drone appears in the sky with hardly anyone paying attention. Things become more serious, however, when gun shots are heard in the distance, although residents attribute them to Lunga (Silvero Pereira, “Copa 181”), a resident of Bacurau hiding from the authorities in an abandoned reservoir.

When the water truck that is forced to deliver water to the residents arrives filled with bullet holes and leaking water, cell phone signals are unavailable, and six residents of a local farm house are found murdered on their property, the community knows it is under attack. The forces behind these strange events manifest themselves when two motorcyclists, a man and a woman, curiously dressed in neon-colored spandex suits arrive in Bacurau. Emissaries of an English-speaking group of armed mercenaries, former military officers led by the aging, deranged Michael (Udo Kier, “Far Cry”); they are people killers, playing “a most dangerous game.”

With the local Brazilian music of Caetano Veloso and Geraldo Vandré as well as John Carpenter’s electronic “Night,” operating as a catalyst in the background, the town unites in what becomes a life or death struggle to preserve their town against the American mercenaries. One of the most powerful scenes involves an elderly naked man being set upon by two gang members in his home until Filho suddenly subverts our expectations. Bacurau brings attention to serious issues such as corporate exploitation of the environment, social and economic isolation, deceitful politicians, and the phenomenon of random mass killings.

Unfortunately, it is also marred by cartoonish characters and simplistic, often gratuitous, violence that elicit cheers whenever the good guys bring down the bad guys, but which diverts our attention from examining the reasons why such conditions exist in the first place. While Bacurau is a crowd-pleasing and fiery film that pays tribute to the courage of underdogs united against a common enemy, sadly, it will take more than guns and pluck to solve Brazil’s social and economic problems, now under siege from predatory interests. 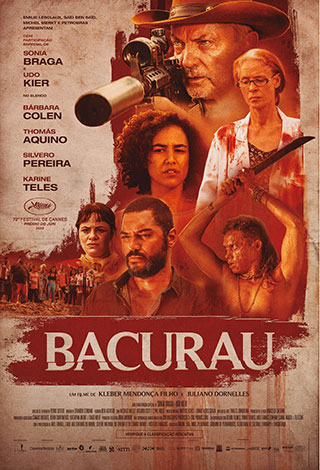