In “Neighboring Sounds,” Brazilian director Kleber Mendonça Filho’s first feature, the focus is on the anxiety that grips a middle-class neighborhood in Recife (Brazil’s fifth largest city), that has residents so fearful of their safety that they hire security guards to protect their buildings. Also set in Recife, Mendonça Filho’s Aquarius narrows its focus to one family and one waterfront apartment, a dwelling that represents decades of memories of children, family, friends, lovers, music, and joy to Clara (Sonia Braga, “An Invisible Sign”), a 65-year old music critic and essayist with a fierce independent streak.

Fighting the aggressive overtures of sleazy real estate operators who want to turn the building into a condominium, she stubbornly refuses to sell her apartment even though she is the only one left in the building. The film is less of a political tract than a character study about a strong woman who has steadfastly maintained her dignity and lust for life. In the first starring role of her career, Braga’s performance is an eye-opener, one that raises questions as to why she was passed over in Cannes for the Best Actress award and why this striking film was not Brazil’s submission to the 2017 Oscars. Apparently, Brazilian politics has had something to do with it.

Aquarius is divided into three chapters named “Clara’s Hair,” “Clara’s Loves,” and “Clara’s Cancer” each segment encompassing much more than its descriptive title. The first section opens in 1980 with a celebration of the 70th birthday of Clara’s Aunt Lucia (Thaia Perez) as family and friends recall Lucia’s life with affection. To the aunt, the cabinet that stands in the corner of the apartment is the catalyst that triggers memories of the man she loved and the toast she offers to him, now deceased, is sincere and heartfelt. The cabinet is still standing in the same corner as the film jumps to present time where Clara is in her late sixties.

A survivor of a breast cancer mastectomy who lost her husband many years ago, the cabinet is a constant reminder of the past, the people she loved and still misses and an eclectic soundtrack that includes Queen’s “Another One Bites the Dust” provides a vehicle that helps to refresh past memories. Content to live alone with periodic visits from her three children, Clara enjoys a vast LP record collection, swims in the nearby ocean, often flirting with the lifeguard Roberval (Irandhir Santos, “The Time and Turn of Augusto Matraga”), does tai chi and group therapy on the beach. She still goes out dancing and night-clubbing with her girlfriends, though hooking up with a distinguished looking man at the club one night does not turn out well.

Clara’s positive outlook on life is challenged by two real estate men who offer her a lucrative contract to sell her apartment but she will have none of it, putting the younger man Diego (Humberto Carrão, “Sparkling Girls” TV show) in his place by telling him that his advanced degrees in business cannot compensate for a lack of character. When Clara’s daughter Ana (Maeve Jinkings, “Neon Bull”) finds out the price the company is willing to pay, she is surprised that the apartment would be worth that much. After a heated argument, Ana wonders how her mother can act both like an old woman and a child, to which Clara replies that it is because she is indeed both an old lady and a child.

Other residents of the building also want her to sell so they can receive their compensation, but Clara’s continued refusal to sell increases the agent’s resolve and a battle of wills ensues, so upsetting that she is forced to enlist the services of a lawyer and her friendly lifeguard. Aquarius is not a somber film but a celebration of the important values in life, some of which have sadly disappeared from our lives. While Clara recognizes that times have changed and she must adjust, she refuses to believe that the things that have been so important to her no longer have the same meaning. The film is not a commentary on Clara’s willfulness, but on a society that no longer recognizes the things that truly make a difference in people’s lives. 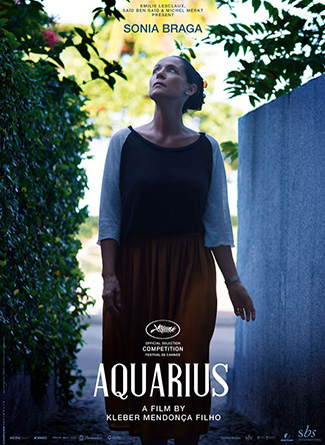