One rule that definitely SHOULD apply for Rules Don’t Apply, “Thou shalt not let your main and most interesting character be overshadowed by two supporting actors that have neither the chemistry or the intrigue to carry a short feature, let alone a two-plus hour one.” But, like the moldy 1994 romcom, “I.Q.,” where Walter Matthau’s matchmaker Albert Einstein takes a backseat to the dull love affair between Tim Robbins and Meg Ryan, here, writer/director Warren Beatty (“Bulworth” and an Academy Award-winning director for “Reds”), plays wacky billionaire Howard Hughes who in turn plays second fiddle to an aspiring actress, Marla Mabrey (Lily Collins, “The Mortal Instruments: City of Bones”) and her cute-but-dullard limousine driver, Frank Forbes (Alden Ehrenreich, “Hail, Caesar!”). It’s the third major motion picture featuring Hughes, behind the Oscar-winning “Melvin and Howard” and “The Aviator,” and is, sadly, likely to remain in third place.

Both Marla and Frank work for the film, aviation and mining magnate, played as a lovable and loopy eccentric, (when, in reality, he was probably in the middle stages of Alzheimer’s or some kind of dementia, perhaps brought on by drug abuse, schizophrenia, plane crashes and/or other causes).

The film begins in Los Angeles in 1964, as reporters wait for Hughes to provide a conference call denying knowledge of a tell-all book author. They wait and wait and wait and then speculate that he will not call and the book may be true, revealing the man as confused and mentally ill, which may cause him to lose control of his many assets.

This scenario fades out and we go back five more years to 1959 where a less confused Hughes has Virginia actress (and virgin) Marla flown to the coast with her annoying mother (Annette Bening, “Danny Collins”). She is met at the airport by a charming, but blank slate chauffeur, who just arrived in LA from Fresno and has a fiancée that works in an animal shelter or something like that. Marla is set up in a bungalow and receives $400 a week while waiting to perform in a screen test for an upcoming film.

She later learns, though, that there are dozens of other young women “employed” by the billionaire, with few, if any, movies to show for their trouble. Since she is no “Virginia bumpkin,” she seeks Frank’s advice, but he has never met his employer, either. He is aware, however, that his boss’s strictest edict is that a chauffeur must never EVER make a pass at one of the starlets. Of course, this is completely ignored as the two begin a silent, slow-boil romance (despite the fact that she is a strong and celibate Baptist) and all the while he dreams of getting his boss to help him invest in a tract of land (hoo boy).

Meanwhile, another driver, Levar Mathis (Matthew Broderick, “Manchester by the Sea”), is also enamored with Marla (whose Groucho Marx-like eyebrows certainly do not fit a Hollywood actress of that era, but . . .), however, he is more open in his feelings for her (she ignores him, of course, because he is not as drop-dead handsome as Frank, I suppose).

As luck would have it, mom leaves the film and Howard grants an interview with Marla, finally revealing himself to the audience.

It seems Hughes, shown in low lights and shadows most of the time, is taken in by her plucky straight-forwardness and verve, so he orders an immediate screen test, even though she confesses she has no talent (we see that quite clearly). Frank then goes back home to break up with his fiancée, Sarah (Taissa Farmiga, “The Final Girls”), sadly, the single most misused character in the picture. Upon his return, Marla writes a tepid song for him (oddly enough, titled, “Rules Don’t Apply”), they make out, but are stopped in their tracks by “chauffeurus interruptus” when Levar shows up. Seems Howard has requested her presence — again.

Well, not exactly. He wanted to see “M.M.,” and the daffy driver thought of Marla Mabrey NOT Marilyn Monroe (yikes). Nevertheless, Hughes goes to ask her to leave, but, as usual, ends up making love to her. In the throes of his approaching dementia, he even places a ring on her finger and tells her they are technically “married.”

With this promise, she dumps her boy toy driver only to find out Howard is already married to actress Jean Peters (who in turn found out he was already married to actress Terry Moore and so on). Meanwhile, Howard is fighting his own internal demons as well as some more tangible ones such as New York money men to the U.S. Congress questioning his Hercules (also known as the “Spruce Goose”) aircraft to those seeking to take over his control of TWA (Trans World Airways). He also begins stammering, repeating sentences, making juvenile requests (like ordering gallons of banana nut ice cream and then replacing it with other flavors) and becoming more and more of a recluse. In addition, a sequence where he flies the neophyte Frank in his first plane trip barely gets off the ground (pun intended).

We then go BACK to 1964 where Marla shows up with a red-headed, round-faced little boy and Frank is now a personal assistant to the filmmaker/pilot who is even more of a hermit and is prepping for his conference call. Seeing the kid, Howard makes the phone call and he’s as coherent and lucid as he needs to be and the author’s claims of Hughes being unaware and suffering from a mental illness are false (even though he is, in reality, often unaware and is indeed suffering from a mental illness).

Shots of a more innocent Hollywood via stock footage (including the beautiful TWA Super Constellation aircraft) and original work (credit cinematographer Caleb Deschanel, “Jack Reacher”) and fairly correct period art direction (Jeannine Oppewall, “The Happening”) makes Rules Don’t Apply enjoyable from a visual perspective, while decent supporting efforts are given by Martin Sheen (“The Vessel”), Ed Harris (“Run All Night”), Paul Sorvino (“Careful What You Wish For”), Candice Bergen (“Bride Wars”), Oliver Platt (“One More Time”) and Alec Baldwin, who played the president of Pan American Airlines in Martin Scorsese’s “The Aviator.” Still, it’s Howard Hughes we’ve come to see and despite all of these distractions — as well as the amazingly boring romance that takes up far too much screen time — the once leading man Beatty gives a nuanced and haunting performance. Sadly, because it is so compact in its length and scope, it may not be recognized as a full-fledged leading role. 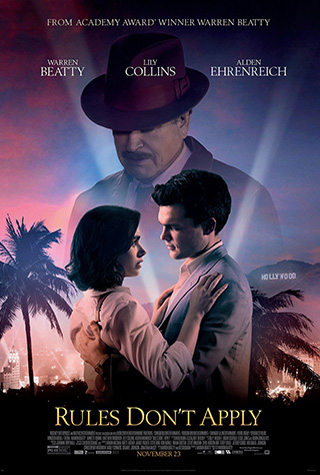