It’s tough to make a religious film in 2016. Not that they aren’t produced anymore, far from it, but that their demographic continues to diminish. An increasingly secularized temperament in the world today means the topic of religion or spirituality in cinema becomes discussed in ever more derisive ways. For audiences, it was difficult to invest in “Man of Steel” as it hammered home its Jesus metaphor with gravitas, and the less said about Pure Flix’s filmography the better. Despite this, Julio Quintana’s first attempt at directing a feature-length film, The Vessel, proves religion is still an intriguing and complicated subject to explore.

Set overlooking a beautiful Puerto Rican sea, a small, nameless, and dilapidated town remains afflicted by a tragic tsunami which killed all the children in its inhabitants. The residents still grieve ten years later by wearing black mourning attire and refusing to bare anymore children. The beloved Father Douglas (played by Martin Sheen of “The West Wing” in a Spanish-speaking role) has seldom seen a local attend his church if at all. The young men and women continue to leave, but Leo (Lucas Quintana) stays in order to look after his mother who remains traumatized by her youngest son’s death. After another tragedy afflicts the town, an inexplicable occurrence involving Leo convinces the townspeople that they’ve witnessed a miracle. Father Douglas sees belief and hope quickly resuscitate in the town as a result but its return also incurs consequences for everyone.

It wouldn’t be surprising at all if it was said that Robert Bresson’s “Au Hasard Balthazar,” from 1966, greatly influenced how The Vessel explores religion (a subplot involving a donkey suggests as much). Both films are explicit in their themes of religion but set their stories in a world motivated by rationality. It works quite well as elements of both the Old Testament and New Testament are spliced into the film’s overall narrative without feeling flagrant or vexing. It invites the viewer to consider religion rather than patronizingly throwing it in their face. An unearthly mood lingers throughout each scene, creating a hypnotic sensation as the camera observes events beautifully rather than drawing us into the characters observing those events. In a manner of speaking, it’s fly-on-the-wall storytelling that creates a sense of omnipresence which, in turn, induces some of the spiritual ambiance that the film is striving to achieve.

However, as this is Julio Quintana’s first time directing a feature-length film, there are some issues with how the story is told. Although Lucas Quintana’s voice-over suggests that Leo is the main character, the story never follows that suggestion. Neither is the film entirely Father Douglas’ story. It vacillates unevenly between the two characters and leaves both undeveloped by the film’s conclusion. The conclusion itself, without spoiling anything, is heavily clichéd at best. Undoubtedly, ending a film about religion can stumble into cheesy territory but it feels particularly egregious in The Vessel because of the clear intelligence motivating the film until that point. It illustrates an uncertainty with how to finish its narrative without thematically favoring a particular position on religion over another.

Nevertheless, as a debut feature, The Vessel is a promising film of future potential from Julio Quintana (potential that producers Terrence Malick, Sarah Green, and Martin Sheen clearly see in the young director). The story creates a sense of intrigue and mystery that hovers over the entire film to great effect. Religion, as a subject, is treated with an astute observation to both its benefits and detractions which gives a sense of intelligent discussion about theology rather than a purely atheist or purely Christian perspective on the subject. For that reason alone, The Vessel stands as one of the more interesting films that 2016 has had to offer this year. 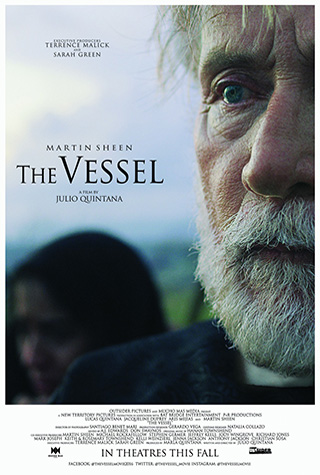