Outsourcing. Giving out one’s resources so that others can invest in them, make them grow, better, more — investors with a proven record in being successful insofar as they have funds to invest in what one cannot. Outsource or stagnate. Outsource or disappear. Outsource or hold back as times continue to move forward. Outsource or quit growing, for outsourcing is the key to economic growth. This belief was honored with ecumenical faith, an abiding dogma during Reagan’s time that is still aped by conservatives everywhere today, as outsourcing was, we are told, the driving force behind a most wonderful era: The one that gave us today’s billionaires and larger than life (or larger than states) corporations with banks too big to fail — even though we keep paying for their failures. Outsourcing. Giving out one’s resources till one runs out of ’em. Nothing more to give, only the authority to keep giving — till all is left is giving in.

Steve Mims’ documentary, Starving the Beast, digs into this purulent model that is slowly taking over higher education in the United States (and, may I say, almost everywhere else in the world). It is an insightful look at the slow blow that universities in the US have been getting since the 1980’s, but which just only recently had realized they got. I was going to say that the documentary paints a picture as to how this idea penetrated (spread, as a gangrenous infection) in American universities, but that would not be accurate. Mims’ style is not visual (even less so pictorial); his is an academic style, like a newscaster streaming a reportage to be then discussed by a group of appointed pundits (voice over included).

Yet, although technically and narratively correct to the point of being generic, Starving the Beast raises a more than timely point as it fleshes out a haunting question: Can education exist as a commodity and still claim any validity? Or, better yet: What kind of education can content itself with being perceived as yet another commodity? Or, more accurately: In what world can education be commodified? Or, actually: What kind of world would result from a commodified education? As a true survey course, the main question ripples from different angles until no answer is possible without prompting yet another question. A truly academic exercise, against the logic that’s used by the protagonists of this parable (that is, the perpetrators — or “disruptors,” as they are called).

And it all makes perfect sense. Should universities become commodities, they will, by necessity, become profitable enterprises, and hence adequately face the fate that’s been prowling them for decades: Extinction. It is the survival of the fittest translocated to the market, Darwinian stocks. It is a customer-oriented model that justifies higher fees, for this model always aims at the consumer’s satisfaction, or, in this case, the student’s. Higher tuitions are thus justified. Lower funding from the state is thus needed. And more debt is created (i.e., student debt), and, with it, the creation of a financial system that makes for a self-sustaining institution, independent of its governmental allowance. The perfect ploy for state funds cuts. After all, who’s the government to say what good education is and what it is not? And who the educators for that matter?

Starving the Beast sets foot in this scenario, lets us in, and gives us preferential seats to its unfolding. If education can be made into a commodity, the main (and natural) purpose of which is to produce profit, then students can be perceived as consumers (clients, costumers), whose main objective is to consume (exhaust) the product they acquire. Then their only focus is to create the means to acquire more of the same product, provided that with “more” we also mean “new” and, to a measureable degree, “better.” Research, in this way, is either useful (i.e., it creates more means or opens alternatives for more profit) or it is not to be. “Useless research,” if it has any purpose at all, has only been meant for ideological indoctrination, which usually leans towards the left, for we know very well that most academics, strange elite, are reputed for their liberal tendencies masked as intellectual development.

The birthplace of this scenario, according to Mims’ revision of the parable, is Clayton Christensen’s oxymoronic (leaning more towards the right side of the word) theory of “disruptive innovation,” you know, one of those theories that did nothing else but ask economic questions (leaving politics aside) and that thus offered nothing but simple (simplistic) answers. The answer is therefore very simple: If quality is lowered, then costs are cheapened, and hence all surplus can be invested in creating cheaper technology that can, in time, help to increase quality while leaving the costs intact. That is, lower quality can be seen as a form of investment. We all know, of course, that in today’s economy (the economy with a capital “e”: Economy all left alone: The Economy) cheaper means better if with cheaper we mean just enough to be functional and, if possible, pretty. Is this not one of the main reasons behind China’s rapid growth? — another being, of course (of cursed!) its slave-like labor market.

The Economy thus must always be left alone, and never ask political questions, for political matters are public matters, and the ultimate matter for business is, constitutionally, private. There’s no room for the public good in this scenario. Yes, that’s true. But had that ever really existed? Or was it not used by crooked politicians to get away with spending at will their taxpayers’ hard earned money? It has always been all a matter of private assets — that’s what everything comes down to. The only true laws are The Laws of the Market: You can only want or not want something, and when you do not, then there’s no point in producing it. Then it becomes extinct.

There’s, to be sure, that other law at which Starving the Beast looks with the corner of its eye: The Laws of Marketing, or the convenient use of a built reputation. In this fashion, what still works about the university as an institution, its undeniable prestige, is still kept as a main part of what this commodity offers. It still sells. And sells well. For prestige plays as a premade-belief that gives the buyer the impression that they can dispense with any form of analysis — what a save of time!

The stark contrast we see between the despair in one group of interviewees (mainly scholars) and the other group (the “disruptor” and his gang) creates an inner tension in Mims’ film that is amongst the best of its many qualities. We see two groups of people speaking different languages. One speaks the language of the market; they, with their smug confidence, explain how brands sell themselves, how metrics amount to only one variable, currency, and how student evaluations provide the only necessary feedback to keep a university alive. The other group just jumbles their arguments in saddened desperation. The explanations of the first group sound hollow, but they also sound reasonable in the sense that they are simple: What something costs should only be measured vis a vis with what it delivers, and this should be aligned with what your customer wants. Any long-term, non-empirically measurable program will be therefore found redundant or, in the best of cases, presumptuous. It will consequently be found, in both cases, dispensable, for standards can always be lowered as they can be turned into deliverables at any time.

Critical thinking has no longer a place in academia, and that’s what these disruptors prove. “These are different times,” we hear again and again, as the dictum of entrepreneurial harbingers, seers in the oracle of the Twenty-first Century: The think tank. These soothsayers are certified justification machines, or lobbyists as they’re also known, the new sophists, tellers of the new truth, sellers of the most dangerous form of knowledge, the one that by having a core of truth is 90% bullshit (to paraphrase but one of the many quotable erudites in distress captured in Mims’ film). These are the individuals who are always ready to offer solutions for problems that have never been defined.

And, you may be thinking (if you’re still thinking, which is quite a merit under the current circumstances), what is the mission of such educational model? The answer is, as predictable, quite simple: To educate happy employees. Universities thus turn into educational centers ready to train students that shall most likely become employees for a market made of just enough employers (though there’s always room for more, they are always handpicked). So it all makes perfect sense. Either universities outsource or they perish. Now, come on! What could be better for a student than securing a job as they study, than having corporations intervening in their education so that they can recruit at the same time in which they educate, sorry, train? That is what experts (Tink Thanks to you Mr. Greenspan, to you Mr. Friedman!) call optimization: Two birds, one stone. Forget about critical thinking! What use does that have? Strategic thinking is all we need.

And now we get back to our initial question: What good does the government serve? An ideal government, as Starving the Beast illustrates with chilling restraint, should operate as a business; it should produce wealth instead of spending it. Traditional universities, in this sense, have no market left — their only asset is their marketing potential: An established brand that lives neither to its name nor its mandate, but that can be used as long as it sells. There’s no room left for those questions that, when we think about it, created universities in the first place. Universal questions, the creation and integration of long-lasting knowledge, the acquisition of a long-term lens, that is, a lens that enables us to see beyond our very selves, have no use in The Economy. But debt does. For that’s what this market concurrently creates: Indebted individuals. And debt creates selfish societies in the same way in which need creates beasts. And a starving beast can be nothing other than a beast indeed.

'Movie Review: Starving the Beast (2016)' has no comments 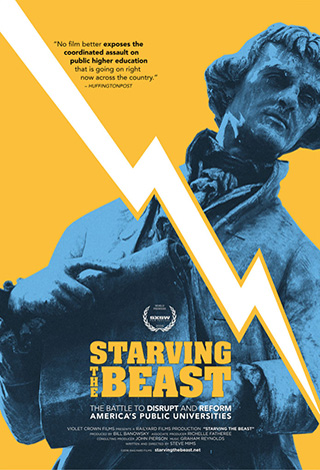