Allison Hillstead (Marie Barker, “Horror Hotel: The Webseries”) has enough on her plate handling the house she just inherited and trying to lock down a post graduation job. With a time sensitive interview in mere hours and a Wilderness Scout knocking on her door, the last thing she needs is any more problems, but apparently no one’s conveyed that to the voodoo zombies in her basement or the undead ancestor that is not exactly a zombie upstairs. Based on the Wilderness Scout’s recommendation, Allison contacts Jake and Desmond (D. Dylan Schettina, “Evolution Creek” and Greg Garrison, “Dekiru: The Three Stones”), two local store clerks who maintain a freelance paranormal investigation business on the side. When they arrive, armed with salt, a machete, and a mystical trident (or is it a fork?), fun, campy, inter-dimensional hijinks ensue as the rag tag team struggles to figure out what’s going on in the Hillstead house and how, ultimately, to save the world.

The best part of The Neon Dead, by far, is its creature design, which revamps tired spectres in old timey clothing tropes by outfitting its monsters with neon green strobe effects and glowing red eyes. One character in particular, with his ruffled, Lestat-esque collar and masquerade mask smile, is a delightful terror every time he is seen. Another unique aspect of this modern scare story is its fight choreography, which relies fairly heavily on fencing and is notably egalitarian as far as gender is concerned. Of course Allison and one of the investigators (who the scout refers to as the cute one before we even see him on screen) partake in the will they or won’t they, strong willed opposites attract type of sexual tension dance endemic to pretty much every genre of movie, which I am personally not the biggest fan of but acknowledge is more of a me problem than a problem with the film. Even as much as I tend to find that dynamic forced and unnecessary, in this case it allows for some pretty funny lines and, as mentioned above, the ability for Allison and Desmond to both help each other and handle themselves.

Speaking of genre — that’s probably the most difficult aspect of The Neon Dead to solidly pin down. While there were times when it made me laugh, I hesitate to either call this film a horror comedy or claim to have been laughing at, rather than with it. That being said, I can say that as much as I loved the creepy creature design, at no point throughout this film did I feel at all scared.

Another odd reaction I felt — especially when Jake, the film’s go-to exposition guy (think Jamie Kennedy’s video clerk Randy in “Scream”), says lines like, “These creatures you’re calling zombies are actually the undead servants of a demon who hasn’t been worshipped since the dawn of civilization. The only information I could find on them was written in a book by a necromancer believed to be one of the most prolific serial killers in all of the dark ages” — was that at times while watching I wished this movie was a book. Truthfully, the mythology surrounding the demon Z’athax, the pale king, Desmond and Jake’s previous misadventures (like the whole ordeal with scout leader Danielle, for example), and the history of the Hillsteads could easily and compellingly populate a much larger space than this film’s one hour and twenty minute run time. This is not to say I felt like The Neon Dead left questions unanswered, but that I would’ve liked to have seen the context behind its answers fleshed out more because they left me feeling so intrigued.

All of this, combined with super fun practical effects and a soundtrack that, though redundant at times, oscillates between sounding like a Fang Island B-side and the soundtrack of an 8-bit heavy metal video game, makes for an enjoyable if not perfect movie; I know I’ll definitely keep an eye out for what its creator, Torey Haas, has planned next. 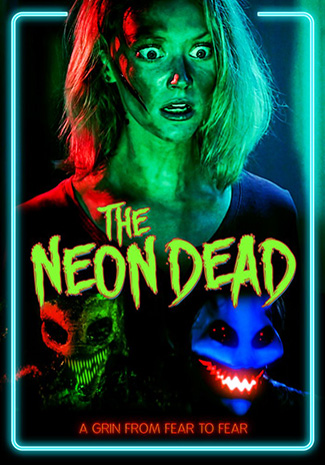