As the story goes, in October of 1994, three college students wandered into the woods of Burkittsville, Maryland to investigate the legend of the Blair Witch. In the summer of 1999, their footage was released as “The Blair Witch Project,” a small movie that cost just over $20,000 to make, and instantaneously solidified its place as a groundbreaking film in the horror genre. The actors were complete unknowns who were given scraps of scripts and were antagonized by the director and crew to ensure authentic anger and fear onscreen. Audiences were both mesmerized and nauseated by the handheld camerawork, and many made their own pilgrimages to seek out a legend conjured out of thin air by the creators of the film. While it terrified some viewers, others simply appreciated and marveled at the enormous undertaking that convinced millions of people the story was true — and believe it we did, for quite a while. The filmmakers’ use of the internet to perpetuate both the story of the missing college students and their original website documenting the legend of the Blair Witch was nothing short of genius, and an entire subcategory of found-footage was born, for better or for worse. Even if you don’t care for the original film, or weren’t frightened by it, you still have to respect the impact it has had on filmmaking and on the horror genre as a whole.

With 2016’s Blair Witch, we return to Burkittsville with James (James Allen McCune, “Shameless” TV series) the younger brother of Heather Donahue, the documentarian college student who disappeared in 1994. For years, he has struggled with his sister’s mysterious disappearance, and has recently discovered a video on YouTube of someone running desperately through an abandoned house in the Black Hills Forest in Burkittsville. Convinced he’s identified his sister in the video, he convinces his friends Lisa (Callie Hernandez, “La La Land”), Peter (Brandon Scott, “Stand Up Guys”), and Ashley (Corbin Reid) to join him in his search for answers and closure. To document their investigation, they bring earpiece cameras that use GPS, audio equipment, and a drone.

Arriving in Maryland, they meet Lane (Wes Robinson, “The Genesis Code”) and Talia (Valorie Curry, “The Twilight Saga: Breaking Dawn – Part 2”) who posted the YouTube video and who claim to be well-versed in the Blair Witch legend. They tag along on the camping trip, filling in the gaps of the stories (and making sure any audience members new to the legend are appropriately informed) as they tramp through the woods. Lane explains that he grew up in the area and knows exactly where the abandoned house stands, but once night falls, things begin to unravel. Predictably, the GPS fails, the group gets turned around again and again as they try to escape the woods, but it’s not until they hear strange howls and screams echoing through the night that they realize they could truly be in serious danger.

Written by Simon Barrett and directed by Adam Wingard, Blair Witch tries way too hard to reproduce the intensity and chaos of 1999’s “The Blair Witch Project,” and ultimately fails. The story wedges in the background regarding the disappearance of the original three missing students and the Blair Witch legend itself as banter among the new campers and actually gives far more information than is really necessary. Additional tales have been forced into the narrative to add *something* new, such as the story of a woman whose daughter was dragged into the creek by a hand that reached out and pulled her under, but they do nothing for the viewer who showed up hoping to be terrified.

Once night falls, the jump scares begin, and unfortunately, this movie relies far too heavily on false setups that grow tiresome very quickly. The false scares remove any tension attempted in the film to the point that actual scares no longer have any real effect. As in the first film, once the campers are separated in the darkness, the cameras’ battery life grows shaky, but nowhere near as shaky as the filmed footage itself. Some of the loudest critics of the first film lambasted the nausea-inducing handheld footage taken by the actors; in comparison with this footage, “The Blair Witch Project” looks like it was filmed by seasoned professionals. The 1999 footage, though incredibly shaky, still maintained some focus on the characters running ahead in the dark; this film’s footage repeatedly documents nothing but blind panic and tree branches. We shared the terror felt by Heather, Mike, and Josh in the original film because we, too, didn’t know what to expect. Here, the panic scenes feel like filler purposed only to stretch the already short runtime.

Blair Witch runs a mere 89 minutes, but feels much longer. The characters aren’t portrayed with much depth, but this isn’t the kind of film you see for character development — you see this film hoping to be terrified, or at least to experience some tension. The buzz surrounding this film (originally billed as “The Woods” before being revealed as a new “Blair Witch” film at San Diego Comic Con) was deafening, and horror fans were set up to be terrified once again. Unfortunately, for the bulk of the film, all you feel is boredom. It takes far too long for anything to actually happen, and once something does occur, it’s a chaotic jumble of predictable confusion for the characters.

There’s very little in Blair Witch that reflects a new element to the legend, aside from the suggestion that time is manipulated within the woods and the mysterious redesign of the abandoned house’s floorplan. Most of the movie is a haphazard rehash of what worked well nearly twenty years ago — the cinematography, haunting audio, symbolism, and specific shots are repeated both to substantiate the original legend and pay homage to the original film; however, as we all saw in Gus Van Sant’s shot-for-shot remake of “Psycho,” an attempt to duplicate innovation often results in a mess of a movie that makes you wish you’d just stayed home to rewatch the original. 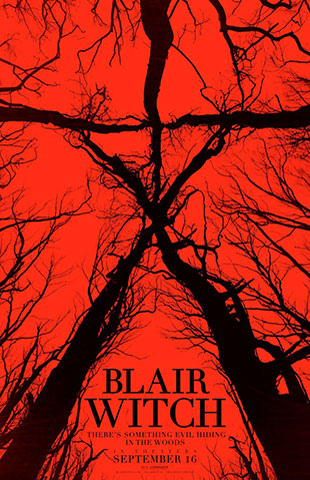