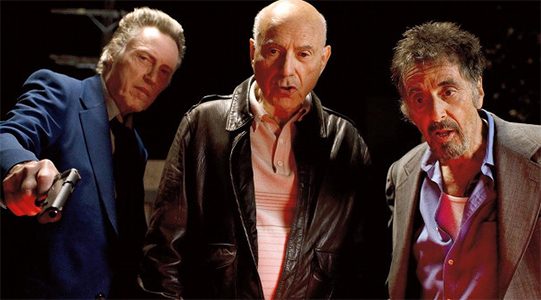 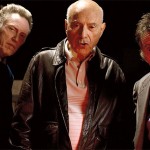 The “Stand Up Guys.”

Every act has a consequence. In 2002, Fisher Stevens directed “Just a Kiss” which offered an absurd view on what can happen in the case of gross misunderstandings and infidelity. In Stand Up Guys, he proffers an absurd view on what could happen if one were to accidentally kill a kingpin’s son. Only this time instead of working with an ensemble of 30-something year olds, Stevens’ has a combined 150+ years of acting talent — Al Pacino, Christopher Walken and Alan Arkin — to help him spin a semi-dark tale of friendship and honor.

The three of his stars play aging, semi-retired thieves who were general bad-asses in their heyday. Hirsch (Arkin) is holed up in a hospice waiting for his number to be called. Val (Pacino), recently paroled after a 28 year stint in the big house for robbery and manslaughter, wants to get back to his old ways. Doc (Walken) lives a simple life, doesn’t want trouble, nor does he want to anything to do with the murderous task he’s been assigned (remember the kingpin and consequences?). But because of their strong friendship, Doc decides to drag his feet on the assignment and provide the every want to Val while he figures out the next move to do.

What he didn’t count on, however, is Val wants a whole lot. There’s plenty to make up for; after all, Val’s got years and years of debauchery to catch up on.

For the next 24-hour period, Fisher directs his stars into various situations — some sentimental, some outrageous — and, luckily for him (and possibly the viewer) he doesn’t have to do much because even though the three actors have never worked together on a film, they piece together like a warm knit hat, gloves and scarf. This translates to very natural riffing between the cons; one could almost swear the scenes in the bar where the septuagenarians reflect over the good times are real conversations Pacino, Walken and Arkin would have if they were sitting in a bar in downtown SoHo. It’s also helpful the roles were tailor made for these guys: Pacino is the cantankerous one, Walken is the quirky one and Arkin is the quieter one. 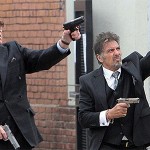 They all get their moments to shine as the night progresses, though. 28 years without the touch of woman makes a man understandably horny. Cue, a stop at the local madam Wendy’s (Lucy Punch) house where pokes are made at Val not being able to get it up without the aid of a little blue pill. A stolen car makes for some childlike exuberance for one-time getaway driver Hirsch (once he figures out how to start the car). Doc, well he plays the steady hand throughout Stand Up Guys, more often showing a softer, contemplative side, especially when the subject focuses on his favorite waitress, Alex (Addison Timlin).

First time scribe Noah Haidle also tosses in an opportunity for the three to deliver some brutal comeuppance to some wanna-be gangsters when they run into a traumatized young woman (Vanessa Ferlito).

This scene is a sharp departure from the more lighthearted undertone of Stand Up Guys but it is a stark reminder that these guys are from a different era. Friendships matter as does doing the right thing in all circumstances. The actors aren’t exactly challenged delivering this message but they’re having a good time doing it. For the most part, we’re having a good time watching them. 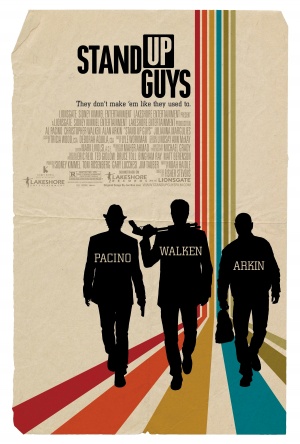