I have to be honest, I might just have the world’s worst case of Acrophobia (for laymen, a fear of heights). This phobia could not have manifested itself any more acutely than during the newest release, The Walk, directed by Robert Zemeckis (“Who Framed Roger Rabbit,” the “Back To the Future” franchise and Academy Award winner for “Forrest Gump”), the story of Frenchman Philippe Petit’s famous high-wire walk between the two towers of the World Trade Center in the summer of 1974.

The scenes involving work at the top of the structures brought about a dizzying, head-spinning, almost nauseous wave which washed over me throughout the film’s relatively short 123-minute running time, forcing me to cover my eyes several times like a teenage girl at an “Evil Dead” marathon. Still, the effort to cinematically recreate this amazing feat was so well done, so realistic, so intricately designed that I could not look away for long, lest the full spectacle of The Walk be denied.

Despite this glowing introduction, though, it does take a little work to hit its stride. We are introduced to Petit (Joseph Gordon-Levitt, “Don Jon”), an imp-like waif with a questionable French accent juggling and doing a street act in 1973 Paris. Entranced by the high-wire, he ingratiates himself into the world of tightrope walker patriarch Papa Rudy (Ben Kingsley, “Exodus: Gods and Kings”) and soon becomes confident enough to try his first public event. Unfortunately, he loses that confidence, stumbles and falls. Later, however, he succeeds at an illegal trek across the twin spires of the Notre Dame Cathedral, drawing media attention and whetting his appetite for his New York adventure. Of course, Petit cannot do this alone, so he recruits some Frenchmen, a street singer, Annie (Charlotte Le Bon, “The Hundred-Foot Journey”), photographer friend Jean-Louis (Clément Sibony, “The Tourist”) and math whiz Jean-François/Jeff (César Domboy, “Week-ends”), as well as Americans J.P. (James Badge Dale, “World War Z”), Albert (Ben Schwartz, “The Other Guys”) and the scene-stealing Barry (Steve Valentine, “I’m in the Band” TV series and looking very much like Hugh Jackman in “Pan”).

The actual walk is enough of a climax, but the real fun is how Petit and Co. prepare for such a journey. Spying on construction workers (the south edifice had yet to be completed), sneaking equipment up the 110 stories and then connecting the tightwire in the dead of night caused any number of chills, especially with characters matter-of-factly working to complete these procedure made this author feel even more queasy. There are so many problems to solve: Security guards to evade, equipment to test, disguises to wear, it makes for wonderful cinema.

Petit, who calls the walk the “coup,” is also immovable and firm in his conviction to complete his objective, even when police, helicopters and false friends get in his way. Despite the fact that we all know (namely those who witnessed or heard about the affair, or those who saw the 2008 documentary, “Man On Wire”) that Petit completed his walk safely several times, including kneeling and lying down on the wire (just like we knew the Titanic sank and the Apollo 13 spacecraft made it back home), so there are no spoilers here. The trick, however, was to make each step in the walk as suspenseful and intriguing as possible. I, for one, could not help be recoil and stare in wonder at the final walk at the same time. It was a truly amazing sequence.

Zemeckis, who co-wrote with Christopher Browne — based upon Petit’s book To Reach the Clouds, do just that. And while the action overwhelms the actors at times, the characters hold their own with the story when push comes to shove.

Finally, it’s difficult for us today to see the towers and know they are no longer in existence. Zemeckis realizes this too and acknowledges their loss by lovingly lingering upon them at their birth. The Walk becomes not only the story of a man obsessed with an almost impossible dream, but a requiem to metal and concrete and that which is good in all of us. It’s a bittersweet experience, but it’s also one of the most stirring and emotional experiences one is likely to see in the cinema in many years. 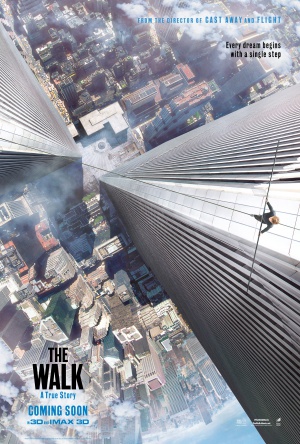