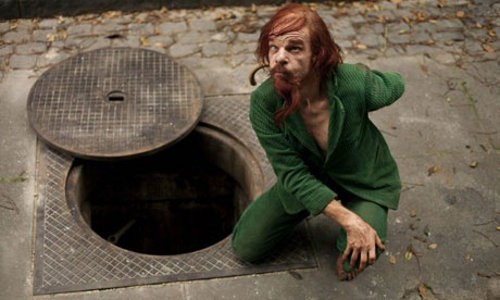 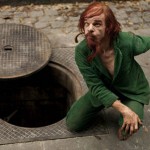 From the sewer depths.

What do a flower-munching troll, a motion-capture performer, a dying uncle in bed, a tracksuit-wearing killer, and an accordion-playing band leader have in common? The answer is Denis Lavant. And cinema, too. These characters, all played by Lavant in various disguises throughout the course of the profoundly imaginative picture Holy Motors, have been plucked from recognizable cinematic situations and then remodeled to become something wholly unique that unfolds simultaneously as honest homage and cryptic commentary. Each character (and there are many more than the few I mentioned in that initial list) represents a genre, a tone, a style, multiple elements blended together to create something intoxicatingly rich, a projection of human imagination and cinematic freedom and the tethers that hold them close.

With each successive sequence, Lavant and director Leos Carax carefully, collectively reinvent their genius, building upon the established blocks of information with poignant precision, but always leaving playful question marks in their wake. Finding and then making sense of the answers is a task left mainly to us and the sheer immensity of imagination on display in Holy Motors ensures that the space open to interpretation is vast. What little is made clear to us is that a Parisian man played by Lavant has a busy, time-consuming job where he is driven around in a limo to various appointments, which require him to don different identities in order to act out scenarios.

The scenarios introduce a wide range of genres to the movie, so sometimes we’re in something as grounded as a domestic drama where we witness an awkward conversation between a father and daughter, and other times we’re in something as wild as an effects-driven science fiction picture that provides a visually inverted look at motion capture athleticism and eroticism when the scene is presented almost entirely without the digital effects overlaying the captured movements. These two particular sequences are seemingly as different as can be, but they share an energy, a strangely delicious flavor, and a dedication to the limitless reach of cinema that collectively binds them together. Each piece of the movie’s puzzle is linked in this way, so even as the different appointments appear to operate by their own unique parameters, thematic consistency unites them and prevents the long list of fresh experiences from becoming disparate.

Just as important as tying these threads together is making sure that the knots aren’t glaringly obvious. The concept of Holy Motors is episodic in nature, but the picture doesn’t accelerate in spurts, instead unfurling with a flowing grace that gathers all of the pieces to create a whole experience. Lavant’s presence is the connective tissue here, strengthened by its unique constancy. He’s always on screen, but nearly always different. His performance is otherworldly, an astonishing display of kaleidoscopic identities, all adopted with gusto. Lavant hurls himself into each new role and proves able to hit every note perfectly. There’s not an emotion this guy can’t beautifully register, nor a look he can’t pull off. Watching him transform onscreen is a supreme cinematic pleasure, that rare feeling of being in the midst of overwhelming greatness and needing only to surrender ourselves to the brilliance.

Lavant is hypnotic throughout, devouring different genres with the ferocity of the flower-munching troll and then later with the tenderness of a lover whose past briefly resurfaces in the form of a chilling and deeply moving musical sequence. As a whole, Lavant’s performance is unlike any I’ve ever seen, a cinematic gift that has put me under a spell from which I will quite possibly never break free. I’m utterly flabbergasted by the sheer ambition of Lavant’s work here and how he breaks it all down so that every piece is so enchanting, so dazzling, so mesmerizing. This is quantity and quality, completely combined.

The collaboration between actor and director further fuels the tanks of Holy Motors. Carax paces the movie with incredible care and he captures just the right tone at all times to match Lavant’s performance. They both tackle each sequence with total cohesion, entirely on the same page about everything. Part of the grand uniqueness of the movie is how Lavant and Carax commit so determinedly to each slice of homage. They avoid quick jokes and easy gags in order to examine these different narrative elements at close distances with passionate authenticity. 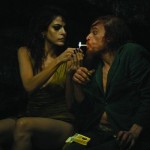 When the movie tackles the idea of the dying man with a mournful relative by his bedside, it does so without undermining the genre and cliché that it so lovingly wishes to comment on. Lavant and Carax take the situation seriously and don’t poke fun at it. They’re not satirizing the familiar scene, but rather embracing it by adding it to their arsenal of cinematic wonders. Like so many scenes in the movie, there’s eventually reason to laugh, itself an impressive right angle departure from the scene’s otherwise dominant tone, but the drama isn’t trampled on because the treatment feels so genuine. That the movie can make such a scene work outside of the usual context (this is the only time we ever meet this specific character, of course) is another testament to the power of Lavant and Carax’s craft.

There’s nothing quite like the limos in Holy Motors and there’s nothing quite like the movie itself, either. The places that Lavant and Carax take us to reach some of the highest cinematic peaks I’ve scaled in years. There are so many surprises lurking around every corner, so many oddities waiting to be discovered. Each appointment is interesting, engaging, and effective in its contribution to the entire experience. Each genre that is chosen for exploration is handled carefully and refreshingly. Additional casting decisions bring further success to the picture. Edith Scob is excellent as Lavant’s trustworthy driver, while brief appearances by Eva Mendes and Kylie Minogue lend specific ingredients to some of the movie’s finest moments. Breathtaking song choices provide several scenes with aural accompaniments that are as gorgeous as the visuals. There is so much to love here, so much to take away, so much to never forget. This is cinema lived and relived, born on the screen and burned into memory. 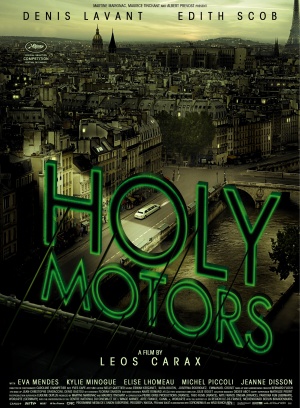