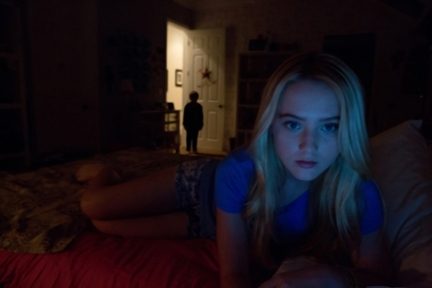 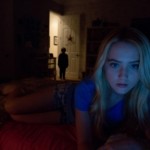 A boy at her door.

Not to personalize my critique too much, but the most frightening moment about Paranormal Activity 4 was when I tripped on a buffer cord coming out of the theater. The pain and embarrassment of my clumsiness, however, was nowhere near the agony I felt while watching what I hope will be the final installment of this ridiculous franchise that now firmly ranks among the worst of the horror/haunting genre.

The minuscule plot could be about a little boy named Hunter/Wyatt who might have been kidnapped by a crazed aunt (Katie Featherston, from the last three “PA” films) and then perhaps was adopted by a cardboard suburban family — dad, Doug (Stephen Dunham, “Savages“), mom, Holly (Alexondra Lee, “Shopgirl“) and pretty but vacant teenage sis, Alex (Kathryn Newton, “Bad Teacher“). Then, there also might be a creepy kid named Robbie (Brady Allen, who makes the boy on “Problem Child” appear sweet, tender and loving), who seems to live in Alex’s treehouse.

I use words like “could,” “maybe” and “perhaps” here because, during most of the movie, I had NO idea what was going on. Filmed in “Cloverfield”-Vision, Paranormal Activity 4 is nothing more than a series of vignettes that attempt to frighten but only succeed in inducing either muffled laughs or extreme bordom. In it’s mercifully short 88-minute running time, this picture still laps itself in complete tedium.

And, for a supposed horror/ghost film, there is not one genuine scary moment to be found (believe me, I looked). There are loud noises, some shadows that cross the scene, a ball that bounces down some stairs, a room full of disco lights, a cat that comes and goes and a levitating girl. The only real terror is the performance of Alex’s extremely annoying boyfriend, Ben (“Bucket and Skinner’s Epic Adventures” TV series, I know, I’ve never heard of it, either), who seems to come into the house at any hour he wants. 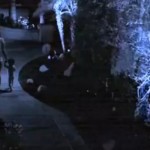 Trying to capture what little suspense the first installment, “Paranormal Activity,” contained, co-directors Henry Joost and Ariel Schulman return to the same well the series is famous for: Dark, grainy cam footage. This time, as technology advances, the afflicted attempt to use a series of laptops to record the increasingly “scary” events in several rooms of the house. The problem, other than the notion we’ve seen it all before, is when this point-of-view is established, it must be kept consistent. Unfortunately, it’s not — to drive the movie along characters seem to be recording EVERYTHING in their lives, even scenes in which they could not possibly be recording themselves.

It’s small things like that, coupled with the wooden acting and lack of true scares and direction that fail Paranormal Activity 4. The fact it also rips off from much better examples of the genre — “Poltergeist,” “The Shining” and “The Blair Witch Project” and steals from not-so-good movies, such as “Silent House,” and “The Haunting” doesn’t help the cause either.

A total waste of technology and energy, my best advice is to skip Paranormal Activity 4 and to save your precious money for something much more terrifying, such as the sequel to “Bridesmaids” or “The Hangover Part III.” 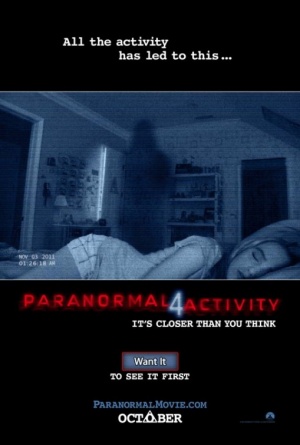