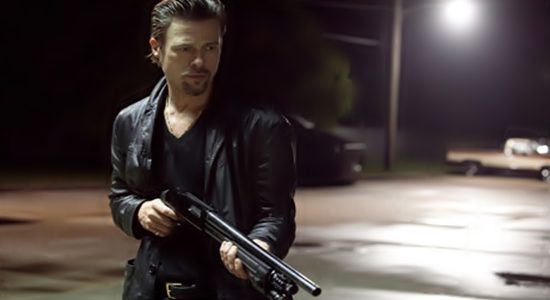 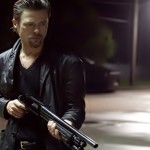 Director Andrew Dominik’s third feature film after “Chopper” and “The Assassination of Jesse James by the Coward Robert Ford,” 2012’s Killing Them Softly is a brutal tale of mob politics based on George V. Higgins’ 1974 novel “Cogan’s Trade.” On top of being a gritty gangster picture, the film provides a thoughtful commentary on America’s current political and economical climate. Indeed, Dominik highlights that the mob and the government are in fact very similar, though neither party is prepared to admit it. For those unwilling to pay full attention and engage their brain, Killing Them Softly may be ultimately unsatisfying, as it asks more of you than a routine shoot ’em up flick. While the film is maddening from time to time, it does contain a number of inspired moments, and it’s rich with atmosphere and nuance.

With the 2008 presidential election looming, a low-level gangster named Johnny Amato (Curatola) hires a pair of grungy hoods (McNairy and Mendelsohn) to rob a mob card game. The organizer of the card game, Markie (Liotta), has been known for robbing his own game in the past, and thus the robbers believe that the “street” will just assume that Markie is to blame yet again. After the heist, an unnamed mafia middleman (Jenkins) brings in an enforcer named Jackie Cogan (Pitt) to sort out the situation. Cogan’s task is to seek reparations for the stolen money, and kill anyone necessary in the process.

Killing Them Softly clocks in at a refreshingly brisk 95 minutes, though Dominik’s first cut reportedly ran a more sizable two-and-a-half hours. As a result, the picture does feel unusually streamlined, and the dialogue is perhaps a tad too terse, rendering the narrative somewhat difficult to follow. With a few key events actually happening off-screen, Killing Them Softly demands your fullest attention lest you get hopelessly lost.

Interestingly, one of the primary concerns of Dominik’s screenplay is social commentary. At several points throughout the film, characters literally stop what they’re doing to listen to speeches delivered by either Obama or McCain as they lament the dire state of the American economy. Dominik draws parallels between mobsters and politicians, as both types of individuals only really care about themselves, and are driven by the relentless pursuit of money. The very final line of dialogue delivered by Pitt solidifies this underlying theme in a very thought-provoking manner. Fortunately, Dominik supplemented the biting political satire with dark humor; Killing Them Softly is littered with amusing banter, as well as a memorably terrific instance of slapstick. Dominik is so often recognized for his distinctive cinematic style (and rightfully so), but his talent for colorful dialogue deserves acknowledgement as well. 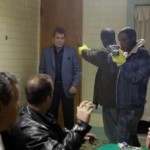 From a technical standpoint, Andrew Dominik’s efforts are immaculate here. The picture exudes a marvelous sense of visual command, and it’s slick and stylized whilst still feeling somewhat raw. The moments of violence are especially impressive thanks to Greig Fraser’s cinematography and the extraordinary sound design. The heist sequence is nail-bitingly tense, and every time a punch is landed or a gun is discharged, we experience it in a visceral fashion. The death of one character is especially remarkable; it unfolds in ultra slow-motion, letting us absorb the visual symphony of bullets, broken glass, falling rain, and blood. It’s a true spectacle of brutality, perhaps one of the most memorable instances of cinematic bloodshed in 2012. Another excellent touch is the music. Killing Them Softly is not suffused with an original score; instead, Dominik mostly relied on an array of songs which add a great atmosphere to the picture. The most notable song choice is Johnny Cash’s “The Man Comes Around;” the lyrics have strong parallels to the Jackie Cogan character, and the melodies are haunting.

The cast is solid from top to bottom, but it’s Brad Pitt who deserves the most credit. As Cogan, the actor is spot-on, playing an interesting and complex anti-hero which is far removed from the type of performance we often see from him. Meanwhile, Richard Jenkins is predictably excellent here. Jenkins is suitably understated and low-key, yet always believable and riveting. Equally terrific is James Gandolfini as Mickey, one of Cogan’s acquaintances. Rounding out the key players is Ben Mendelsohn (“Animal Kingdom“) who’s skin-crawlingly creepy as a low-level hood, and Ray Liotta who is surprisingly multifaceted as gangster Markie.

It’s somewhat of a challenge to review Andrew Dominik’s Killing Them Softly, as my thoughts on the film were actually changing throughout the writing process. Immediately after viewing the film I was left somewhat unfulfilled, but the more I contemplate it, the more I appreciate it. Ultimately, this is a solid motion picture, a stylized gangster flick with a relevant message that demands multiple viewings. 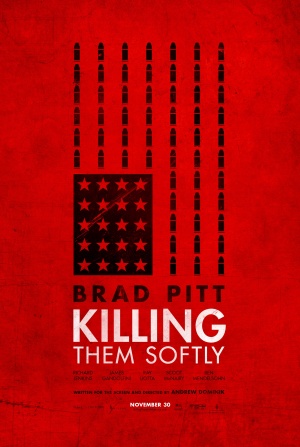