Although I was not familiar with Rooster Teeth Productions projects prior to watching Lazer Team, I can now pretty much imagine what the small production company brings to the table (without having to go to IMDb). Clever video game based comedy, along with entertaining machinima, all catered to a humored, tech-savy audience. This out of the blue sci-fi comedy definitely fits into that mold, mixing computer generated imagery, with farce comedy and satire. All together, creating a low-budget cult film that old fans will thoroughly enjoy and it may just create a few new fans along the way.

The film begins with your typical science fiction intro, vintage photos and documentation of extraterrestrials, as we are made known of our setting. In the late 1970’s, Earth is contacted by an alien race called the Antareans, warning them of an opposing alien race called the Worgs, that wishes to destroy the entire planet. Upon message receipt, the US government takes quick action and proceeds to develop a young child, into a super-intelligent and physically peaked warrior. But on a universal level, that simply won’t be enough to stop the Worgs. Inspired by the mythological story of Perseus, the Antareans plan to deliver a powerful weapons suit to Earth to fight off the destruction from the Worgs.

This power suit contains; a helmet that enhances intelligence amazingly, boots that allows streaky superhuman speeds, a left arm that can activate a useful energy shield, and a right arm that can shoot an impressive energy cannon at enemies. Together with these abilities our champion of the Earth (played by Alan Ritchson, “The Hunger Games: Catching Fire”) will presumably save the world. Disastrously for the US government and the planet in general, these powerful weapons fall into the worst hands possible . . .

As we are introduced to our stars, the film holds the charm of a made for television movie. The first lovable underachiever we meet is Anthony Hagan (Burnie Burns, “The Outfield”) a lowly traffic cop who hates his job, but takes it a tad too seriously. He is constantly taunted by students and locals just for being in his position. One of his first encounters, is nearly being run over by a former student athlete named Herman Mendoza (Colton Dunn, “Parks and Recreation” TV series), whose football career was cut short by a leg injury. Mendoza’s passenger and buddy, is visible town idiot, Woody Johnson (Gavin Free). Hagan is called to bust a local altercation where he meets and arrests high school quarterback Zach Spencer (Michael Jones, “Rwby” TV series), who does his best impression of Johnny Manziel at a high school party.

These four jokers are comically brought together and somehow receive the mission of saving the planet. Young director Matt Hullum does a decent job of giving all of the characters space to insert their own comedic elements, while not steering too far off course. Each have a natural chemistry with their costars and all are generally able to counteract and play off of each others humor, and the audience can truly sense their enjoyment and enthusiasm. I would genuinely not be surprised to see a sequel or a different style film done with these four guys, just with different character traits.

Because traits here are one of the biggest flaws of Lazer Team — the comedic tone of the film was limited to the personalities of these characters, which sometimes just seemed . . . too dumb. Smarter or more observant characters would have honestly made the film more enjoyable and less cringe-worthy at moments. A bright spot for the film, however, is definitely Colton Dunn’s performance. He is arguably the most entertaining character and this films stands as his coming out party along with his new hilarious role on the new hit show “Superstore.”

From a futuristic stand point, while the film’s plot is hopeful, cartoonish CGI elements arguably take away from some of its credibility as a legit entry. But that hasn’t stopped the genre before and in the film’s defense it is low budget and the actual technology displayed for the suit is actually quite impressive (or should I say not nearly as bad as it could have been).

What the film lacks in compelling graphics or deep resonating characters it makes up for in innocent humor. The film’s overall tone is reminiscent of cult hero films like “Mystery Men,” or “Galaxy Quest.” Offering light-hearted laughs and ambitious (as ambitious as can be expected) action sequences Lazer Team is worth a watch for sci-fi fans, comedy fans, or cult film fans in general. 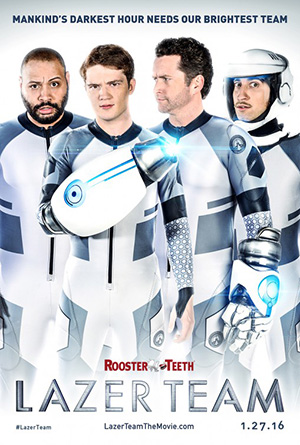