Budapest Noir, directed by Éva Gárdos (“American Rhapsody”) transports us to the Budapest of 1936. Zsigmond Gordon (Krisztián Kolovratnik, “The Man Who Was Thursday”), crime reporter for a major newspaper, is covering the funeral of former Hungarian Prime Minister Gyula Gombos, a real life politician who had pro-Hitler leanings. Not too thrilled about this dud of an assignment, Gordon is lucky to catch a story about a young prostitute murdered in the city’s red light district. Now that’s more up Gordon’s alley, because the newspaperman has that classic risk-taking, noir personality and attitude. He drinks bourbon and chain smokes, and knows how to mingle in questionable or unquestionable company. He cracks sardonic jokes at the right time, and knows how much to tip a waiter or informer. He cajoles a woman colleague into working late, and keeps his editor at bay, promising to deliver a delicious news item that will titillate the paper’s readers. He’s also a ladies man who can negotiate a truce when two of his paramours end up in his apartment at the same time. He strides confidently, his fedora appropriately skewed, his overcoat flapping in the cold city air, indifferent to the wind or thermometer. But this is 1936 in Eastern Europe. Winds can signify more than weather, and therein lies the tale.

Gordon gets a literal snapshot of geopolitical change — something that fails to capture the attention of the pavement pounding newsman — when his beautiful photographer girlfriend Krisztina, played to elegant perfection by Réka Tenki (“On Body and Soul”) shows him her photos of Jews being harassed in Germany. Krisztina helps Gordon’s investigation, but any chances for a long-term relationship are stymied when she informs him only British publications will print her photos, a portfolio that will be an exposé of Hitler’s Germany. But when Gordon finds her boarding a train that will eventually take her to London (perhaps forever), he catalogs the situation as a romantic breakup, not the tidings of a societal one.

Budapest Noir dishes up traditional noir atmosphere and characters, and the screenplay penned by András Szekér, based on Vilmos Kondor’s novel of the same name, contains the snappy sardonic dialogue that keeps the pacing on track. Gordon’s investigation of the prostitute’s murder leads him into the city’s underbelly — a shady world of pornographers and politicians, con men and crime syndicates. He attends midnight boxing (which includes girl on girl matches) and visits brothels in search of the “hook” that can be featured in his headline.

Gárdos has done a terrific job of casting while the cinematography by Emmy-award winner Elemér Ragályi (“Rasputin”) expertly pays homage to the genre while adding a modernist touch of partially desaturated colors that evoke minatory gloom. Given the year and the setting, could the subdued tonalities be a sign of a gathering peril? The answer arrives when the first clue to the murder emerges. It is then that a larger menace takes on a reserved, yet palpable reality. It is also the point at which Budapest Noir takes the genre and stands it on its head. And that is the film’s major and ingenious step forward beyond traditional genre boundaries.

The first jarring clue is that the murdered woman was carrying a “Jewish book.” This is the plot point that focuses Gordon’s investigation, and involves him, albeit at a distance, with his own “Jewish question.” The prescient clue leads Gordon to solve the lurid crime, but for the ardent reporter — and in traditional noir sensibility — the satisfaction of completing a story is eclipsed by anticipation of his next assignment. It is then that Gordon’s off-the-cuff line “This is Budapest,” echoes the legendary last line from Chinatown.

But this is 1936 Hungary. Unlike the setting where L.A. Detective Walsh consoles Jake Gittes with “Forget it Jake — It’s Chinatown,” Gordon lives in a time and place where a story is brewing that will eclipse all others, including any and all of his own. And unbeknownst to a guy hunting down tomorrow’s scandal, its plot is nearing completion. 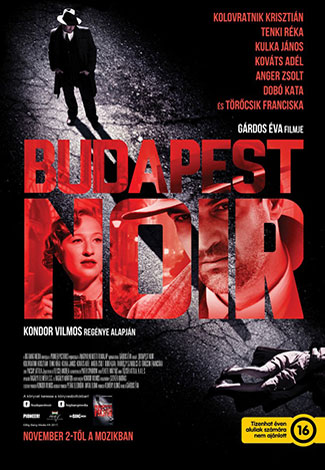