A warrior with no cause and no companions other than his sword and his guilty conscience. A mentor who lost his faith upon witnessing his protégé’s descent into bloodlust and murder. A prince who betrays his family for power and will crush anyone who opposes him. A young man who learns honor, courage and humility through hardship. These are the clichés of Nick Powell’s Outcast, a swashbuckling adventure that fails to deliver anything new or accomplish anything interesting with its stock elements.

Beginning in the Crusades, Outcast introduces its protagonist Jacob (Hayden Christensen, “Jumper”) and his mentor Gallain (Nicolas Cage, “Ghost Rider: Spirit of Vengeance”) in the heat of battle, as they storm a Moor stronghold with ruthless resolve. Both are highly skilled combatants, but Gallain is clearly dismayed by Jacob’s disregard for women and children. So far, so much we have seen before. To be fair, Outcast makes an attempt to present its imperialist Christians as problematic, as Gallain urges Jacob to abandon their bloody campaign and “go east,” but all to no avail as more blood flows, severing the bond between the two friends. The film quickly abandons any notion of political nous, however, and narrows its focus down to individual journeys of redemption as we flash forwards three years to the Far East, where a dying king (Shi Liang) names his youngest son Mei (Ji Ke Jun Yi) as heir and charges his daughter Lian (Yifei Liu) with Mei’s protection. The king then sends his two children away before his eldest son Shing (Andy On) returns. Shing is a proud and arrogant warrior who demands the throne and readily kills anyone in his way. While in flight, Lian and Mei find the now opium-addled Jacob, who (after initial reluctance) helps them as an attempt at his own redemption. Shing’s “Black Guards” pursue our heroes, various battles occur before a climax is reached and the film can mercifully end.

The plot of Outcast will be familiar to those who have seen “Gladiator,” “Kingdom of Heaven,” “Robin Hood” and any other number of feudal-set adventures. There is nothing intrinsically wrong with recycling stock characters and clichéd plots, provided that something interesting is done with them. Sadly, Nick Powell is no Ridley Scott, as his film lacks epic scale or any palatable sense of an inhabited world. The locations vary little between mountain, trees, river bank, more trees, alternative river bank, and interiors where dim lighting obscures production design and leaves the viewer feeling that this is a set some actors have walked onto, where they deliver rather stilted lines. It may seem unfair to expect more of a film with a limited budget, but then again if you cannot afford decent sets and locations, perhaps this is the wrong film to make.

These shortcomings might be forgiven if the film had thrilling or even creative set pieces. Unfortunately, the (frequent) sword battles fail to engage, shot with irritating unsteady cinematography and bouts of slow motion. Both of these techniques fail to create tension and instead come across as overly stylized and poorly designed. There is some reasonable choreography that emphasizes the combat skills of Jacob, Gallain and Shing (who at several points seems to channel Joaquin Phoenix’s Commodus from “Gladiator”) but these sequences feel like desperate attempts to show off the actors rather than being organic pieces of the film as a whole.

The film also features the tired cliché of the white savior. Again, this can be used in interesting ways, such as “The Last Samurai,” “The Last of the Mohicans” and “Avatar,” but here the salvation provided by Jacob is almost by rote. When he stirs out of an opium-induced stupor to come to the aid of Mei and Lian, you can practically see him say to himself “Innocents in danger? This is my cue!” There are suggestions of interesting gender politics, as Lian as well as Gallian’s wife are women of wisdom and authority, and Lian has possibly the film’s best speech (which isn’t saying much) as she laments the role of women in a world torn apart by war (even reviewing the film slips into trailer cliché!). But these ideas are largely abandoned in favor of tedious patriarchy and the grim and unrelenting motivations of men wounded both in body and soul. This abandonment is all the more frustrating as these arcs might have saved the film from being so painfully obvious. Further sins include a random peasant girl who joins our heroes, echoing perhaps intentionally the far more interesting assembly of waifs and strays in “The Outlaw Josey Wales,” but here the girl serves no narrative purpose whatsoever; the requisite romance constitutes only a single scene and goes nowhere, making it utterly redundant; a reunion between old comrades can be seen coming a mile away; the one half-decent set piece ends up recalling the far better sequence in “House of Flying Daggers.” Amidst all this dreary mess, it is forgivable that everyone speaks English, whether they are indeterminate European (English? French? Who cares?), Moor or Chinese. Aside from Nicolas Cage’s Gallian, that is . . .

Considering Cage’s back catalog, perhaps the most surprising thing about Outcast is that he is not the worst thing about it. But that may be because he is barely in it and his bizarre accent, sounding like a combination of posh English and, well, Nicolas Cage attempting posh English, gets minimal screentime. This is probably a good thing as any more would likely become interminable. But like everyone else, Cage is playing a stock character that could have just as easily been played by Liam Neeson, Gary Oldman, Jeremy Irons or any somewhat grizzled performer. So maybe the best thing to say about Outcast is that it is not another stick with which to beat Mr. Cage, as it is so inconsequential and unengaging as to not be worth the effort. 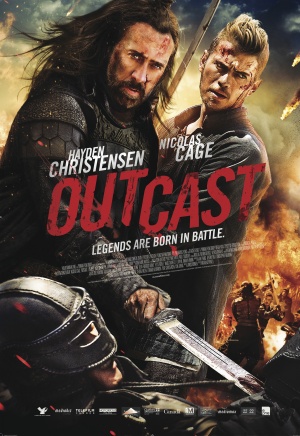