Zombieworld is a horror-comedy tour de force that’s an absolute must see for everyone who enjoys mixing their giggles with their gore. While far from a perfect film, Zombieworld is an anthology style romp through one take on the apocalypse that injects as much new life into its genre as it resurrects, leading to some truly delightful moments, and some that will raise your eyebrows, at least.

The movie begins with a group of people frantically running through the woods in an attempt to escape both zombies and the military forces that are trying to violently contain them (“Dark Times”). What’s interesting about this scene is that it’s shot from the point of view of one of the people who is running and who, of course, goes on to become a zombie himself. While a similar approach was utilized in the “A Ride in the Park” sequence of “V/H/S/2,” being shot ostensibly from the actual vantage point of the zombie-to-be (like the very first vignette in the “V/H/S” series) is an interesting departure from the aforementioned short’s GoPro technique. Unfortunately, after this man is disemboweled, and is shown disemboweling others, there is another POV sequence toward the end of the film, “Dead Rush,” that features the same POV style, transition into zombiehood, and further disemboweling. What’s most disappointing about the repetition of this shot is that at no point does anyone having their guts clawed at call out anything remotely as cool as Captain Rhodes’ “choke on them!” in “Day of the Dead.”

Next, we are shown the obligatory exposition dump employed by all too many movies, zombie and otherwise: A clip from the news. This time around it turns out not to be a throwaway gimmick, but the backbone of the rest of the film. Recall how the “V/H/S” movies would cut back to the house where the tapes were discovered between individual stories; for the rest of Zombieworld, we will continually return to Marvin Gloat (Bill Oberst Jr.), a broadcast journalist who has been bitten himself, and plans to continue reporting until he turns.

With Gloat leading the way, we are taken everywhere from the time when Jesus walked the earth (and brought Lazarus, the world’s first zombie, back to life), to rural West Virginia (in a sketch that would probably have fit better in “The ABCs of Death”), to a crazy Ibiza beach. Many of the shorts we are shown work — some are even so new and inventive, they’ll absolutely delight you — but of course, there are duds as well.

One section that really stood out to me was “Home,” the dialogue-less story of a woman who, in the wake of the loss of her lover, has rigged a special alarm system to notify her of the arrival of the undead. The ending of this one was truly and refreshingly unique, romantic, and sad, especially considering its place in a movie that features, only moments earlier, a gratuitous sequence of Jesus decimating throngs of zombies, armed with nothing but fish.

Speaking of Jesus — another stand out in Zombieworld is “I am Lonely,” in which a man returns to his flat to find his roommate dying on the floor from a neck wound similar to that sustained by Marvin Gloat. While his roommate slowly dies, the man begins confessing his transgressions throughout their friendship, before going on to contemplate the relationship of the Christian God to what is transpiring outside. He remarks that he’d “like to see the look on [Christian people’s] faces now, eh, what with the zombies at all,” postulating that “if you take the Ten Commandments as like the literal word of God, then, yeah, the whole world is bad,” and that perhaps the zombie apocalypse is the fabled Judgement Day the “Bible Bashers” have been talking about.

Then there is the series of recurring “How to Survive the Zombie Apocalypse” Public Service Announcements, which re-appropriate elements from the movie “Zombieland” (instructions on how to survive, both acted out and shown on the actual screen), paired with a campy voice over that sometimes drags their jokes out so long, they no longer work.

This is not to say that the PSAs are entirely unfunny, which is how this movie saves itself. Even the final sequence, “Brutal Relax,” which was by far my least favorite, was saved by its inclusion of the coolest creature design in the entire film. This type of balance saves this fun, silly, disgusting movie, which pleasantly surprised me, and will probably infect you too. 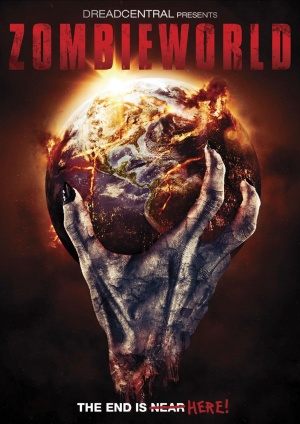