In Ghost Rider: Spirit of Vengeance, Johnny Blaze (Nicolas Cage) often speeds down roadways like a bat out of hell. However, in this case, the idiom should be taken literally. Following a pact with Satan, this once renowned stunt motorcyclist becomes tormented by a demonic entity which, on a mission to punish and consume the souls of the wicked, occasionally transforms its host into a flaming skeleton and his bike into a fiery death machine. But whilst in the Balkans, escaping the consequences of his curse, Blaze is confronted by Moreau (Idris Elba), a warrior-priest promising an exorcism in exchange for saving a young boy, Danny (Fergus Riordan), from Roarke (Ciarán Hinds), the devil’s corporeal incarnate. For viewers and the titular antihero alike, the deal is sweetened when Nadya (Violante Placido), the boy’s hot mama, joins the adventure.

Usually it’s the superhero’s punch lines in a movie that are corny, but everything Johnny Blaze says is offensively moronic. This sequel to 2007’s “Ghost Rider” (which was directed and written by Mark Steven Johnson), is helmed by Mark Neveldine and Brian Taylor, who’ve hired new scribes to translate the Marvel Comics franchise into theaters. Penned by Scott M. Gimple, Seth Hoffman, and David S. Goyer, the script tries too hard to be trashy fun — a format that could’ve worked had there been an inkling of substance within the bathroom humor and hyperbolic dialogue. What’s worse is that, during the long stretches without special effects, the they attempt to expand on the protagonist’s descent into madness — a metamorphosis soured by the film’s tone.

Direction-wise, Neveldine and Taylor use a lot of shaky camera and bleak gray-brown visuals. In conjunction, these stylistic choices work. The instability of the shots pumps adrenaline into the dull action sequences and hides spotty CG work. While one particular scene — a shootout that has Ghost Rider handling a giant crane-turned-hellish weapon — is impressive, the effects are mostly choppy. Even the title character, though given some extra detail, is awkwardly rendered. However, even cheap skeletons are easier to admire than Cage.

The actor’s handiwork is marked by whispering and screaming. In addition, I’ve noticed that the way he enunciates his lines makes for unintentional laughter. He’s also hilariously hyperactive. For someone who’s received high marks in “Raising Arizona” and “Adaptation.,” two stories of internal conflict, Cage is surprisingly hit-or-miss at portraying personal strife and often resorts to bulging out his eyeballs to make a point.

Except for Hinds, who rarely delivers a subpar performance, and Johnny Whitworth, the actor behind Ray Carrigan, a mercenary bestowed the power to decay objects (and people) at touch, the supporting cast doesn’t help. Elba puts on a bad French accent and Placido, while good-looking, remains flat. Lastly, Riordan is very irritating (probably why he and Cage appear so compatible on-screen).

While some of these shortcomings can be attributed to a 40% budget cut, much can be blamed on the filmmakers, who have carelessly constructed this sequel. Despite being a movie about a fiery demon that can turn its opponents to matchsticks, Ghost Rider: Spirit of Vengeance barely packs enough heat to roast a marshmallow. 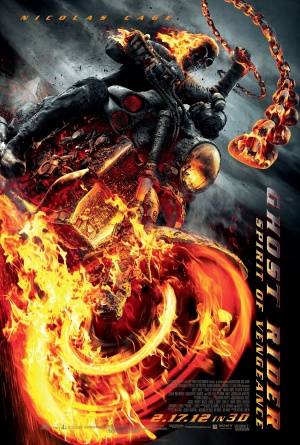