Based on the memoir by Garrard Conley and set in rural Arkansas, Australian director Joel Edgerton`s (“The Gift”) Boy Erased tells the moving story of Jared Eamons (Lucas Hedges, “Lady Bird”), an 18-year-old gay college student and his struggle for self-acceptance in the face of rejection by those whose support he desperately needs. Raised in a fundamentalist religious environment that regards same sex relationships as sinful, Jared has an uneasy relationship with his parents, mother, Nancy (Nicole Kidman, “The Killing of a Sacred Deer”) and dad, Marshall (Russell Crowe, “The Nice Guys”), a Baptist preacher. When Jared is raped in college by a fellow student (Joe Alwyn, “The Favourite”) who spitefully informs his parents, the teen is given the option of being exiled from his family or undergoing what is known as “gay conversion therapy.”

Uncertain of his own sexuality and needing his parents support, Jared acknowledges that he wants to change the behavior that he believes to be wrong and is willing to attend a 12-day conversion course that attempts to change a person’s sexual orientation by using religion as a justification and coercive techniques as its method. The facility that he is sent to is called “Love in Action” and is run by the well-meaning but authoritarian pastor Victor Sykes (Edgerton). Like a Chinese re-education camp, those enrolled must follow rigid rules such as surrendering their cell phones and turning over any notebooks they may bring. They are also not allowed to discuss the details of the program with their parents or guardians who stay at a nearby hotel.

Sykes believes that homosexuality is a choice and that “tough love” techniques are effective in producing results. These techniques include forcing recruits to acknowledge their sinful ways and express anger towards their parents. They are also compelled to draw up a family tree showing which family members were sinful. This kind of borderline sadistic behavior is exemplified by counselor Brandon (Flea, “Baby Driver”) who, on one occasion, prevents Jared from leaving the bathroom, calling him a “faggot.” Using shame and physical abuse to intimidate, Sykes zeroes in on Cameron (Britton Sear, “Unfinished Business”), a quiet, heavy-set boy who will not acknowledge his “sins,” bullying him by having family members beat him with a bible and immersing him in a bathtub until he nearly drowns.

Fellow converts Jon (Xavier Dolan, “Bad Times at the El Royale”), Sarah (Jesse LaTourette), and Gary (Troye Sivan, “X-Men Origins: Wolverine”) support the program or, in Gary’s case, just tell Sykes what he wants to hear until it’s time to leave. Refusing to condemn his father, however, Jared retrieves his cell phone, calls his mother to pick him up, and bolts from the facility. As the troubled teen, Hedges delivers a sensitive and nuanced performance that has encouraged Oscar talk and Crowe and Kidman provide exceptional support. While Jared is a symbol, he is also a human being and his growth from a taciturn, compliant individual to one who stands up for himself and outwardly expresses his feelings is inspiring. The most compelling scenes of Boy Erased, however, revolve around his relationship with his parents.

Edgerton is cautious about portraying Jared’s dad as a villain and makes clear that the parents love for their son is real even if they have different ideas about what is best for him. In a pair of impactful scenes between Jared and each of his parents that take place four years later, Marshall realizes that a reevaluation of the ideas he has held his whole life may be necessary and Nancy moves from being a submissive echo of her husband to asserting herself not merely as a wife and mother but as a thinking individual who cannot close her eyes to the harm that is being done to her son.

Much progress has been made since the time not too long ago when being gay was considered by many professionals to be a mental illness that required drastic treatments such as castration, hypnosis, or electric shock. Even though virtually every leading health organization has denounced efforts to change one’s sexual orientation, and reaffirmed that attempts to do so could result in serious health risks, gay conversion therapy is still flourishing and has been banned in only 14 states in the U.S. In addition to being a superbly crafted film, Boy Erased delivers a potent message that may help these remaining states realize that the only fix that gay people require is acceptance, support, and unconditional love. 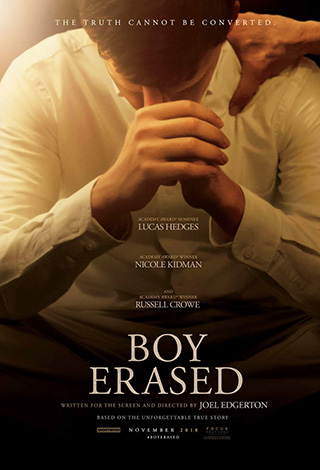