Writer/director Shane Black certainly knows how to make a good buddy-cop movie. He chalked a first Hollywood kill with 1987’s “Lethal Weapon,” the tale of two trigger-happy LAPD detectives, now considered a cornerstone of the cannon. His partner on that project was producer (now super-producer) Joel Silver, with the pair continuing to collaborate in the genre with “Lethal Weapon 2,” “The Last Boy Scout,” and the critically acclaimed “Kiss Kiss Bang Bang” (the film that arguably brought Robert Downey Jr. back into the spotlight).

An eight-year directorial hiatus followed, until Black helmed 2013’s hugely successful “Iron Man 3” (again starring Downey Jr.), which grossed over $1.2 billion worldwide (the tenth-highest of all-time at release). In the wake of such a blockbuster smash, one would expect Black had the pick of the Hollywood litter when deciding on the next project. His choice: To once more saddle-up with Silver, return to his investigative roots, and cruise the crime-ridden streets of Los Angeles with The Nice Guys.

Set in funky 1977, Jackson Healy (Russell Crowe, “Noah”) is a deadbeat but functional L.A. enforcer, earning his keep with persuasive fists. Once clients finger their perpetrator (stalker/undesirable boyfriend) Healy steps in. Complete with a trusty knuckleduster, he offers them professional ‘advice’ to keep away. One such finger points him towards Holland March (Ryan Gosling, “The Place Beyond the Pines”), an even-bigger deadbeat private eye who preys on the city’s more vulnerable and “senile” clients. A character assessment from March’s daughter Holly (Angourie Rice, “Walking with Dinosaurs”) reveals him to be “the worst detective ever,” whilst his deceased wife had a more kindly vision of “a nail not quite hammered all the way in.” He’s not adverse to take on a job looking for known-to-be dead suspects or feeding back misinformation to increase time on the clock (and his fee).

A professional visit results in the pair getting to know each other on March’s kitchen floor, with Healy delivering a bone-snappingly trademark message to stay clear of his client. A series of events and a reconciliation bring the two back together after government-honcho Judith Kutner (Kim Basinger, “Grudge Match”) looks to employ their combined investigative “skills” to locate estranged daughter Amelia (Margaret Qualley, “Palo Alto”) who has become embroiled in L.A.’s porn-soaked underworld. Team “Nice Guys” is created; March the mouth, Healy the muscle, with daughter Holly providing an emotional grounding. Together they career and blunder through the city’s assortment of brightly dressed bell-bottomed gangsters to uncover an ever-expanding case of exploitation at the highest level.

The film stands on reassuringly familiar territory. As already mentioned, Black is an expert of the genre, and his local knowledge rubs off as he takes us on a well-guided tour through L.A. Noir. The 70’s design feels well inhabited, and the plot borrows most of its beats from Roman Polanski’s genre-defining “Chinatown”: ecological danger, perverted family allegiances, and high-end corruption. With these core bases covered, The Nice Guys can focus its attention on the humorous buffoonery of its A-lister duo, and they exhibit a genuine comic chemistry throughout. Crowe plays the “straight-guy” to Gosling’s theatrical fool (think “The Dude” crossed with Inspector Clouseau). One particularly audience-creasing scene in a public toilet establishes this dynamic early on, with Gosling attempting to simultaneously keep the door open, cover his privates, and point a pistol at Crowe while dealing with a smoldering cigarette in his ankle-level trousers. After last year’s “The Big Short,” Gosling has reaffirmed his credentials as a genuine comic talent. Performances in both films depict characters that should be deplorable (selfish, dishonest, untrustworthy), yet he wins over the audience with boyish charm, innocent eyes, and some ineffable quality that reassures he’s not a bad person deep down. Crowe doesn’t reach the same laugh-levels when uncoupled (it’s safe to say he is not a natural comic actor), but he works well in the duo as a quietly violent surface to bounce the ball off.

The jokes get progressively extreme throughout The Nice Guys, with the biggest laughs rewarding the goriest gags. Thankfully, the dark humor doesn’t diminish the film’s light tone, as the clash of crime-noir/stoner-romp could have quite easily ended in a mess. However, the film inhabits both zones nicely without detracting from the enjoyment of either. Despite lagging towards the end of the second act (trimming 15 minutes would have certainly been a benefit) it shuttles along at good pace, hits its key notes, and reaches a satisfying action-strewn climax. Some of the more “touching” scenes surrounding the 2-fathers-1-daughter triangle don’t always work, but this isn’t a film that’s targeting sentimentality or aiming at profound revelations. It’s shoots at “fun” and strikes a bull’s-eye. 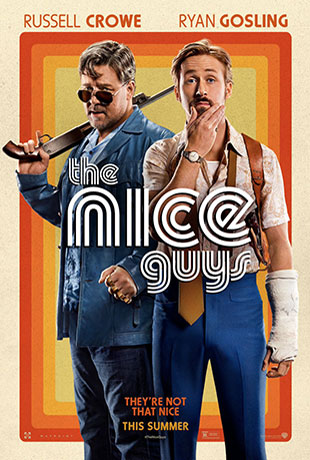