There’s a scene in Bite in which a young man, frustrated by the actions of his bride to be, takes a gulp of whiskey, stares into the mirror, and then smashes the glass against the wall in angst-filled rage. The man’s anger is not misplaced, because his betrothed appears to be getting cold feet, which is certainly plausible. She also is experiencing some weird physical (and psychological) transformation, the result of a “bachelorette getaway” interaction with the local wildlife in Costa Rica. The young man is not aware of this.

Casey (Elma Begovic, “Save Yourself”) travels to Central America on a vacation with her best buds Kirsten (Denise Yuen, “All for One” TV series) and Jill (Annette Wozniak, “Secret Santa”). Already, Casey is having doubts about marrying Jared (Jordan Gray, “The Lockpicker”). He wants kids, she does not; her mother in law really, really dislikes her; her mother in law is also her landlord. And so on — normal, everyday worries that nearly newlyweds encounter all the time.

While taking a dip in a hidden river, Casey is bitten by something lurking beneath the surface. No big deal, you’d normally think. Well, the movie is called Bite for a reason, and indeed upon returning home Casey begins to develop rashes over her body. This is probably not the work of a lone mosquito.

As she is dealing with her mounting health problems, Casey becomes more and more anxious about having a serious conversation with Jared about their pending nuptials. Not only has the vacation given her some time to really think things through, the situation becomes more volatile when she realizes that she’s lost her engagement ring in Costa Rica. Oh, and something about partying hard one night and waking up naked on a beach. And did I mention that good old Jared has insisted upon waiting for marriage to, you know, consummate the marriage? (At the prodding of his domineering mother, I might add).

But fret not! This is not a melodrama about twenty-somethings unsure about wedded bliss. This is a straight-up horror tale, with Casey’s escalating fears and stress levels manifesting as physical . . . well, let’s call them accouterments, shall we? I don’t want to reveal exactly what Casey begins to morph into, but there’s plenty of blood, gore, and other liquids of a suspicious nature. And some desiccation, too. People die, man, and it’s not pretty.

On the plus side, the visual effects are really well done. The initial breakout on Casey’s skin, the murder(s), the set pieces themselves, all lovingly treated with a crimson glaze. Walls ooze with some kind of pus that dwarfs that found in the house in “The Amityville Horror.” Sticky webs of indeterminate origin and intent litter the screen like products of a crazed Spider-Man. The artists behind the visual appearance of Bite appear to love their job very much and take it seriously.

On the negative side, there’s some pretty bad acting (although, to be fair, some of the dialog is a little cringe-worthy in its own right). The plot isn’t terribly complex, but it seems caught in a tractor beam of predictability, particularly in character development. Casey’s two BFFs are fairly one dimensional, although Yuen fares better than Wozniak in terms of exhibiting some talent. Begovic herself is a good damsel-in-distress turned malevolent, vengeful entity. Know who really steals the show, though? Lawrene Denkers (“Liminality”), who plays Casey’s irritable, nasty mother-in-law-to-be. Denkers positively owns the character, adding much more dimension to it than any of her younger costars can muster.

I’d call Bite a middle-of-the-road gorefest. Like I said, it’s very well presented, almost well enough to make you forget that the plot is sort of pedestrian and that most of the actors’ performances aren’t terribly convincing. Almost, anyway. 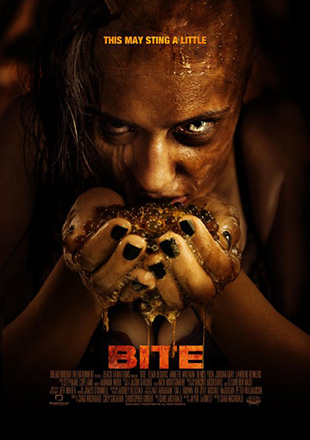