Rob Grant’s Harpoon is another entry in the perennial argumentative-people-stranded-on-a-boat sub-genre, and it’s a cut above the average. It is, however, a stranger to subtlety, and juvenile at times, but it’s never boring and consistently bold in its narrative choices.

Take the opening scene for example. Richard (Christopher Gray, “The Mist” TV series) storms over to his friend Jonah’s (Munro Chambers, “Turbo Kid”) house and beats him practically unconscious. Richard’s girlfriend, Sasha (Emily Tyra, “Ring Ring”), drags him off. They settle in the aftermath. Richard believes Jonah and Sasha are having an affair — something they deny.

Richard’s way of saying sorry — and please activate Disbelief Suspension mode now — is to take Jonah and Sasha out on his expensive yacht for a trip into the big blue. Their fishing lines have barely been cast before one character has had his hand impaled and another is left for dead in the Atlantic. This is just the first 20-minutes. The next hour is a combination of survival horror and argumentative drama, with some frat comedy thrown in.

Three neatly sketched characters constitute the entire cast. Hastening character development, the film takes a cheeky shortcut via a narrator (Brett Gelman, “Jobs”). I’m not sure the narrator was necessary. Sure, this sarcastic voice moves things along swiftly, but much of what he tells us is clear from what we’re shown. We know Jonah’s parents are dead because we see him dispense with their ashes. We know Richard is prone to rage because within seconds of his introduction he’s punching the steering wheel and then wailing on his friend.

But it’s hard to complain about a film which has a clear intention to rattle along without stopping (lest we stop for a sense check). The only moments where Harpoon slows are for its Tarantino-esque forays into slo-mo, complete with ironically upbeat soul music. Other than these needless digressions, the film is efficiently shot and snappily edited. The script has a pleasing clarity, with battle lines which are always clear.

It’s only disappointing that the script has a tendency to slip into the comedy style of grown adults acting like kids. (“Don’t punch me in the balls!” Richard yelps when Jonah demands revenge for his beating.) There’s a quite cringe-worthy scene where these 20-somethings sit around mocking each other’s sexual secrets while passing a bottle, giggling like teenagers at a house party. There’s a crass joke on the tail of every sensitive, emotionally complex moment. So, I’m not totally convinced by the handling of the tone, but given the derivative setup, it’s probably best it bent toward the silly rather than the self-serious.

I guess the composer, Michelle Osis, didn’t get the memo, though. The score is too dirgey and elemental, dragging the movie into grimdark territory, but it is at least sparingly used. The best scene — a truly tense encounter involving the drawing of straws — is played silently.

Though the dialogue is often crass, the screenplay is unafraid to deploy lurching narrative turns and outrageous revelations, which hurl the viewer’s sympathy about like untied cargo on a stormy deck. All three actors are very capable, helping to round the edges off the occasionally rough words. Gray has some of the arrogant charm of Channing Tatum, only with meaner eyes; Chambers is often laugh aloud deadpan; and Tyra’s portrayal of increasing exasperation is utterly convincing.

They need to sell it, because not all the character moments make sense, particularly with regard to Sasha. She is evidently willing to stand toe-to-toe with the violent Richard, so the claim that she has been too afraid to leave him doesn’t ring true; moreover, it renders her decision to step aboard the boat and head into the unknown downright ludicrous.

Nevertheless, if you can suspend your disbelief from the highest rigging, and you can see past the coarseness, Harpoon is an enjoyable, micro-budget thriller. It’s hardly Hitchcock, but it’s brisk, nasty, well-acted and in touch with its own silliness. For the most part, Harpoon is on target. 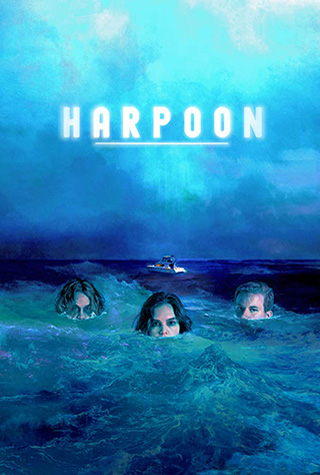