Post-apocalyptic times call for post-apocalyptic measures. The end of all ends elicits from us a fear that is as primal as it is endless. If it is true that individual death is a fear we all share — and a destiny we all shall fulfill — it is just as true that there is a death that conjures and pulls all of our fears out. The death we all dread is the death of it all, of everything that stands, of all that is human: The final stop in our collective story.

Eschatologies are as old in storytelling as apocalypses are in stories. There is just not one story that doesn’t harbor within the mechanisms of its own destruction. But there was always an afterlife, an otherworldly place (either a heaven or a hell or an equivalent in-between) to which everyone would go when there’s no more future to confront or to comfort the idea of our absence. What is new in our times, in our postmodern times, what is new today is that, as otherworldly survival has been ruled out from the public arena, a tenuous gleam of hope has been introduced in our apocalyptic-endings, a safe eschatology wherein some, random survivors are left exhaustedly exhaling in the pitch. The end of the world is therefore not so, for we have introduced an afterlife for the world — an afterworld in the aftermath of the never after.

It is in this afterworld that we enter as we watch Turbo Kid, a place better (and more aptly) known as the “Wasteland.” We traverse this dirty tip precisely on “The Kid’s” (Munro Chambers, “Degrassi: The Next Generation” TV series) BMX, over which he scraps for yesteryear’s items that he exactingly selects before taking his discards to the local (literal) flea-market, run by a goodhearted but coward to the bone (as any good businessman) Bagu (Romano Orzari, “Immortals”). It is this latter who has provided The Kid with the only joy he has been able to find in his already wasted teenage years: Irregularly incomplete comic books of a hero of days past; his name, Turbo Rider. The orphaned and awkward kid has done okay at the art of survival amidst such a hostile environment, ruled by a self-proclaimed leader called (nothing less than) Zeus (played by, none other than, Michael Ironside, “X-Men: First Class”) who, among other things, organizes “Pool Parties” in an empty pool that resemble low-budget Roman gladiator-games filled with people randomly kidnapped by his bounty-hunters. From the casualties of these games, Zeus extracts the few water he distributes among his little army and the Wasteland’s diminished populace. The Kid has learned well which zones to avoid so as to never fall prey to these thugs — but he didn’t know love.

It is during one of his thespian readings of his beloved comics that The Kid meets Apple (Laurence Leboeuf, “Lac Mystère”), an overenthusiastic “girl” whose zest makes her both weird and creepy — which is a lot to say in such a place. After being initially scared by Apple’s eerie friendliness, The Kid ends up bonding profoundly with her, to the point of turning the movie into a love-story at the midst of the end of history. When Apple is abducted by a local mugger, The Kid embarks on a rescue plan to become the hero he had just emulated during his loud readings. Aided by his luck, he discovers the corpse of the true Turbo Rider as well as his powerful weapon, a turbo-firing glove, in perfect conditions to use (and perfectly sized for his rather thin arm — actually he takes the whole attire, which surprisingly shrinks right before our eyes). And as if this was not enough, he finds an unlikely ally in Fredric (Aaron Jeffery, “X-Men Origins: Wolverine”), an anachronistic cowboy that looks like Indiana Jones on welfare and who, being the undefeated champion in arm-wrestling, has stood as the oldest and (seemingly) most feared foe of Zeus’s feud. Together they will fight the tyrant, one for the girl of his dreams, the other for the water source of old legends that hold it lies at the depths of the desiccated earth.

At a first glance, Turbo Kid looks like a movie worth watching — if you like gory, ultra-violent, kitsch movies. And it is. It is a sweet love-story and a satirical look into some of the worst post-apocalyptic films of the 1980’s (yet they have Ironside on their side). It both pays homage to and parodies (the ambiguity proper of our century) those really horrible rip offs that followed the success of “Mad Max.” Notable titles such as “Metalstorm” (and check the similarities between the Cyclops and the Zeus) and Italian gems as classy as “The Exterminators of the Year 3000” (both available online), make the template for this 21st century’s pastiche. But then the feeling comes that this movie seems to be too conscious of its own status as a cult movie. And then it is hard to choose, for it looks like a work that’s trying to predict its own hereafter.

This kind of prediction is what marks one of the clearest differences between modernity and postmodernity. Where modernity dictated men (remember, this was before the time of the grammatical equity between genders) should become the architects of their own destinies, postmodernity determined that humans should aim at being the designers of their own legacies. So it began the secular afterlife, the one belonging to and in history, the whole preoccupation behind how we want to be remembered — and thus the exponential increment of autobiographical material around us.

What is behind postmodernity’s greatest aesthetic contribution is also behind its greatest vice. On the one hand, the pastiche as an art-form, continuously subjected to the interminable intertextuality that, some venture, constitutes the world itself, has stripped art from its ceremonious halo that gave the impression it was something reserved only for the initiated. Thus the dividing line between cult (or high) and popular (or low) art started to blur — until it inevitably blurted. Self-awareness hence became a constant invitation to self-parody, as referentiality (both the referent, where we take something from, and the reference, what we take from it, mixed) relentlessly pointed towards itself, towards circularity; and thus self-referentiality constituted the postmodern canon. On the other hand, however, circularity constitutes as well one of postmodernity’s greatest defects, as it kept dislocating our historical perception (i.e., our collective perception of time) to the point in which anticipation became synonymous with antiquity. In this way, a product, for instance, has an anticipated release date when the producers already have in stock the product that will replace it. This has led us to believe that the unplannable can be, indeed, planned.

A cult movie cannot be planned; it can barely be foretold once released. After its release, a movie’s destiny in twenty years (more or less the time needed before a film can be considered a cult film) is all speculation, all part of the spontaneous machinery from which cults stem. Those same enthusiasts that are the first to elevate a work to a cult status are, usually, the first to desert the worship after another shiny thing catches their eye. However it ends, cults are decisions made by the followers, and almost never by the producers of the object of their affection. Trying to plan a cult movie is like trying to plan being spontaneous — it’s a self-defeating enterprise.

Nonetheless, it should be noted, the self-awareness of its own cult status in Turbo Kid is probably nobody’s fault. It likely originated in neither of the three directors who have been ceaselessly working in short-film after short-film (Anouk Whissell, François Simard and Yoann-Karl Whissell, the trio better known as the RKSS [Road Kill Super Stars]) nor in their growing fan-base; it is likely seeded in the times we live in. The film starts with quite a cute paradox by placing itself at the midst of the 1980’s and by placing this post-apocalyptic future in 1997 . . . And when one has finished processing the words of the voiceover that introduces us into the film (“This, is the future: The year,1997”), one can almost feel how the dislocation of the past in the future that we very well know will never happen(ed) already tickles our very well learned sense of irony. Then we face the satirical role that technology plays (being the most hilarious, and perhaps the best achieved, the use of bicycles in chasing scenes) in the stinginess of the special effects — sometimes we are led to believe that they received their invoices from the nearest dollar-store . . . till we watch the credits. It is there that we understand that this is a premeditated cheapness. Yes, this wasn’t a costly movie. Yes, their resources were limited. But it wasn’t as cheap as it looks nor were they short-staffed.

As a self-parodying pastiche, Turbo Kid is quite a fun film to watch. As a self-induced cult classic, it is just too soon to tell — and way too hard to see. 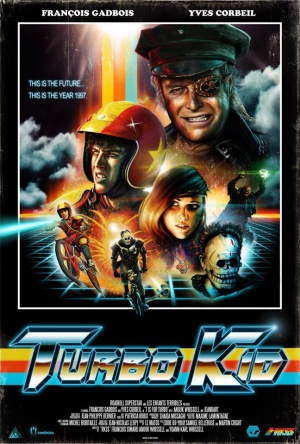