The Transporter Refueled is more like “Transporter Rebooted,” as this is at least the fourth franchise update of the year (following “Mad Max: Fury Road” “Fantastic Four” and “Hit Man: Agent 47”). In this re-working of French producer Luc Besson’s action series, the main star is the automobile, an Audi (just like all of those in the recent “Hit Man: Agent 47”), viewers of the three previous movies may recall, that belongs to Frank Martin, an ex-military operative who rakes in the dollars (or, in this case, euros) helping criminals with getaways and other high-stakes errands. Although, calling this a “reboot” might be a little harsh in this particular instance, since this is actually the fourth film in the series with a mostly different cast.

Here, Frank, played by little-known Ed Skrein (“Sword of Vengeance”) taking over from tough guy Brit, Jason Statham (I never thought I would miss the layered and thoughtful nuances of this actor), is an ace driver, former military man and brawler always annoyed at having to ruffle his suits or be late to an appointment. In The Transporter Refueled he is hired by a group of high-class prostitutes (is there any other kind in a movie like this?) who are attempting to steal millions — hundreds of millions, actually — from their Russian/Slovakian/Greek pimps.

Aided by his father, Frank, Sr. (Ray Stevenson, “Insurgent”), a former super secret agent who nevertheless manages to get kidnapped not once but TWICE (he’s the most incompetent Brit since Rowan Atkinson), Frank the Younger finds himself often way over his head, but his martial arts skills (which allow him to pummel multiple tough guys simultaneously) and his amazing vehicle (a James Bond car on steroids) saves the day over and over again.

This is apparently, par for course in this line of work.

His employer, Anna (Loan Chabanol, “Third Person”), would most certainly prefer that not to be the case. Sold into prostitution when she was 12 (although the scene in which we first see her she looks at least 22), Anna now works with former co-workers — Gina (Gabriella Wright, “Everly”) and Qiao (Wenxia Yu) — on a revenge quest inspired by the book, “Three Musketeers,” as if any of the demographic viewer of this film is even close to that literate. All wear blonde wigs throughout as they take on such non-descript villains as Karasov (Radivoje Bukvic, “Run All Night”), Yuri (Yuri Kolokolnikov, “Game of Thrones” TV series) and Leo (Lenn Kudrjawizki, “Jack Ryan: Shadow Recruit”).

In an elaborate scheme to steal the money and get their due, the ladies engage in some rather intricate high-jinks, such as impersonating doctors to steal anesthesia, gassing an entire nightclub and taking over a yacht that looks like a Navy LST beach landing craft. Meanwhile, dad spends most of the time handcuffed and ogling the women who have no problem undressing for him (and us, for that matter). Young Frank, on the other hand, gets into his share of fisticuffs while trying to figure out just what is going on. Unfortunately, he is so low key and the action so minimal, we lose interest in this enterprise long before he does.

Even mind-numbing and seizure-inducing car chases, fights and dance club sequences do not add to the pleasure. Director Camille Delamarre, (“Brick Mansions”) even tries to nudge us awake with a scene featuring dad and prostitute jumping from a jet aircraft taxing down a runway and Frank, Jr. battling bad guys and their hapless henchmen with a life preserver, a battle ax and a few lead pipes here and there. The story attempts to cast the transporter character in a Bond mold, but it’s more like a Gold Bond Medicated Foot Powder mold, while everyone in the picture (save Stevenson) needs a few more years of acting lessons and makes typical community theater troupes look like Olivier and Hepburn. Add to that the extremely annoying unsteady and amateur camera work featuring nothing but quick cuts every few seconds and the overuse of slow-motion, and you will suffer one of the biggest non-alcohol-related hangovers of your life.

To be fair, however, I did learn a few things from The Transporter Refueled. I learned that police in Europe do not know how to drive and regularly crash their vehicles while engaged in high-speed pursuits. I also realized that millions of dollars can be transferred from secure accounts if your cell phone has a fingerprint scanning app and that serious bullet wounds can be healed almost immediately with perfume, sugar and cobwebs. 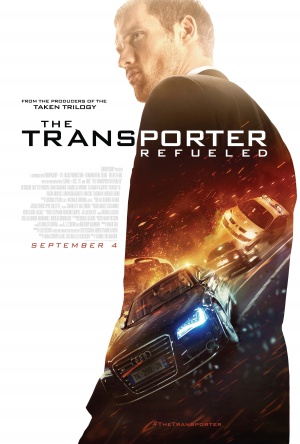