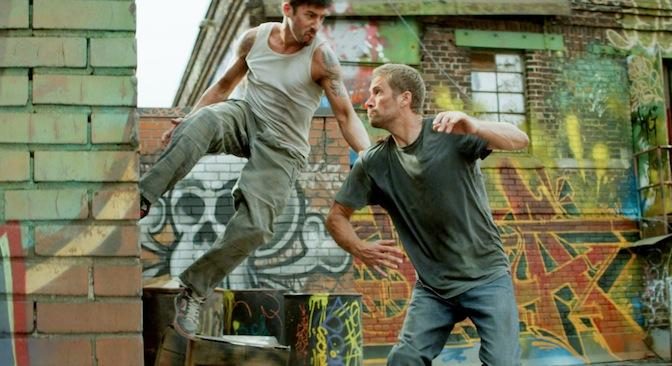 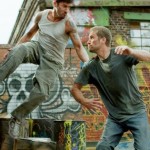 Remakes come in a wide range of shapes and sizes, some more similar to their source material than others. The mold that Brick Mansions was formed in is the kind that thrives on familiarity, though it’s probably a good thing in this case. An English-language update of the 2004 French flick “District 13,” Brick Mansions carries over from France producer/writer Luc Besson and star/parkour expert David Belle. Besson also repeats his usual task of nursing new French talent behind the camera and giving up-and-coming filmmakers a chance to break through. “District 13” was helmed by Pierre Morel, who found the movie was his ticket to Hollywood, where he eventually started the “Taken” franchise. Perhaps the same will happen for Camille Delamarre, whose work here ticks the “Bessonian” boxes with efficiency and energy.

Transplanting the action from a Paris slum to a Detroit one, Brick Mansions is an Americanized version of a story that already felt American-ish to begin with. This is basic action-focused B-moviemaking all the way, with a simple premise used as a spindly frame upon which Delamarre can hang a variety of set pieces. Car chases, roof leaps, explosions, and mismatched fisticuffs are all present in a plot that sends cop Damien Collier (Paul Walker) and convict Lino (Belle) roaring into a walled-up neighborhood where crime runs rampant and a mysterious package with a digital countdown needs to be retrieved before it levels the area.

Those who’ve seen “District 13” will recognize where this is all headed, but as is usually the case with Besson-produced flicks, the surprises are not exactly buried in the narrative. Brick Mansions is an exercise in style, in restless camera work that is eager to excitingly expose the awesome athleticism of parkour. Never mind that the pic’s predecessor already covered that ground a decade ago or that parkour isn’t as freshly exotic as it once was. Such signs of a lacking ambition don’t seem to faze Delamarre, because the filmmaker isn’t trying to reinvent or even reintroduce anything. He’s simply packaging the familiar pieces in a way that is charming in its brevity.

Silliness runs rampant throughout the movie, which is another aspect of its charm. A sense of humor helps link the action sequences together, acting as a kind of glue that starts losing its stickiness the moment it dries. There are attempts at casual buddy humor with the two heroes from different worlds and then there’s the always ridiculous idea of befitting the villain with an innocuous pastime. In this case, it’s RZA as drug-pushing kingpin Tremaine who is often seen cooking up his mother’s signature pasta sauce. These moments are harmless at worst and even though they clumsily miss their mark, there are moments of comic inspiration in the flick, such as when Damien delivers a bad guy to the cops by smashing up the car they’re both in and sending the villain flying through the windshield and directly into the police station.

It doesn’t get much better than that wacky stunt, unless you count the final scenes of the movie, which are so suddenly sappy and dramatically exaggerated that they’re randomly hilarious, if quite unintentionally. It’s all straight out of an inspirational commercial and the movie’s final shot even adds an anti-smoking plea to its loud and clear message about how anyone can clean up their act when given the opportunity to do so. Well, except greedy politicians. They’re beyond saving, of course. This is all part of the warped logic that Brick Mansions is built on. And considering the movie is just a fun romp from action sequence to action sequence, warped logic can be a welcome ingredient. 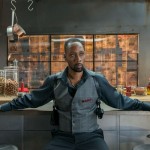 When the movie isn’t busy grabbing laughs any way it can, the action generally entertains in a speedy, antsy manner as Belle and Walker turn the neighborhood into their own personal playground. Belle does the majority of the heavy lifting here in terms of physicality, but Walker holds his own with some casual grit and fancy driving skills that remind us that his Damien may as well have just sauntered over from the likes of “Fast & Furious 6,” the latest in the franchise that was always the fuel for Walker’s career. Interchangeability of character aside, Walker is likable here and even though he’s often been rightfully accused of having a bland, cardboard-y presence, it’s hard to not miss the late actor when watching him perform so clearly in his element.

Judging a remake that so blatantly wants to merely recapture the fun of the original in a very similar fashion is an odd thing, because really, what’s the point of it all? Brick Mansions doesn’t really have an answer for such a shrug-worthy question, but it packs enough flashy fun into its tight running time that it’s hoping the audience won’t care. Familiarity isn’t such a bad thing when it’s given flavor and it helps that the art of parkour never ceases to impress. As stylized genre pics go, Brick Mansions is a tad top-heavy with its best sequence landing in the first act, so it’s fair to question Delamarre’s structural design in cinematic terms. He’s certainly no student of architecture, but for this type of B-actioner, a degree from the school of Besson will satisfyingly suffice. 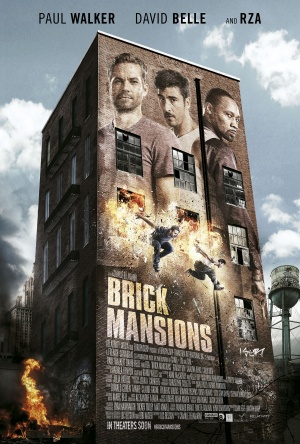