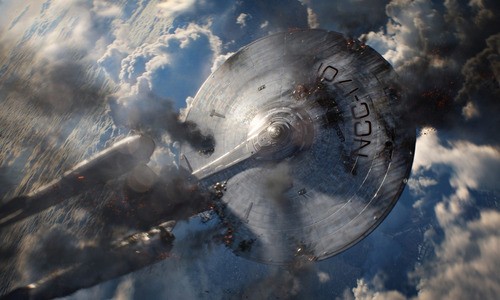 The Enterprise has seen better days.

As the acting Captain of the U.S.S. Enterprise, Hikaru Sulu (John Cho, “A Very Harold & Kumar 3D Christmas”) barked orders at an incorrigible outlaw of the Federation, John Harrison (Benedict Cumberbatch, “Tinker Tailor Soldier Spy”), chills ran down my spine, and I sat in awe of the radiant visual effects. But that was no isolated incident; the entirety of Star Trek Into Darkness carries a lustrous aura with palpable, innovative cinematography. The Starfleet lay helpless as a belligerent new adversary made his presence known, but I too sat helpless as J.J. Abrams put forth the summer’s second renowned blockbuster (“Iron Man 3” getting first billing).

Star Trek Into Darkness, being Abrams’ sophomore effort (he successfully rebooted the franchise in 2009 with “Star Trek”), opens with the crew traveling to Nibiru, a planet with a primitive civilization and a volcano that is poised to wipe it off the map. Hiding beneath the sea, the Enterprise crew watches intently as Spock (Zachary Quinto, “Margin Call”) risks his life to extinguish the volcano’s spewing lava. When things go off plan, Captain Kirk (Chris Pine, “This Means War”), always one for not following the rules, breaks protocol to save his friend and First Officer. Although successful, for his brashness, Starfleet Command strips Kirk of his Captain rank and orders him to serve as First Officer to Admiral Christopher Pike (Bruce Greenwood, “Flight”).

This arrangement doesn’t last long as Starfleet Command headquarters is attacked by John Harrison (whose name is later revealed to be Khan), a genetically-superior man who’d been woken up after 300 years of cryogenic sleep to create weapons for the Federation. Khan it seems is very vengeful towards those who had roused his slumber because 72 of his crewmen still lay asleep and remain vulnerable to the actions of a stern, militaristic Starfleet Admiral, Alexander Marcus (Peter Weller, “RoboCop”).

Marcus, fully aware of what Khan is capable of, orders Kirk into pursuit. The crew — Spock, Bones (Karl Urban, “Dredd”), Sulu, Uhura (Zoe Saldana, “Colombiana”), Chekov (Anton Yelchin, “Fright Night”), Scotty (Simon Pegg, “Mission: Impossible – Ghost Protocol”), among others — encounters debris fields, technical malfunctions, betrayal and bona fide drama as they pursue their crafty adversary, but who will be double-crossed and fooled as tensions build? Will Starfleet once again save the day and allow the United Federation of Planets to continue living in harmony? Or will the lives of fan favorites crumble before viewers eyes as an even bigger foe is employed by Abrams?

These are sincere questions, because the acting by this ensemble sets a new benchmark for science fiction performances — one simply cannot not care these characters. Pine is daring, bold and accurately adventurous as Captain Kirk, and Zachary Quinto once again is brilliant as the robot-like, stiff yet genius Vulcan, Mr. Spock. In this sequel, Spock is also scripted as adamantly more emotional, a welcomed change for the Spock legacy. Another worthy performance, and perhaps not so expected, is the one put forth by Simon Pegg, who plays Lieutenant Commander Montgomery Scott. He is genuinely humorous (which we already knew) but he deftly handles the profoundly emotional drama, managing to single-handedly separate Star Trek Into Darkness from other recent charismatic Sci-Fi thrillers. 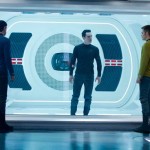 Who is the prisoner?

Ignoring the visual effects of this blockbuster would also be a violation of the Prime Directive, because they are so good, you sometimes forget you’re not actually in the control center of the universe’s most formidable watchdog vessel. The cinematography too — from the expanses of space to the tight quarters of a starship — is just breathtaking (especially when the Enterprise is shown in the foreground of the Earth’s atmosphere). Keeping the optical feast from devolving into an amalgam of explosions and lasers (for the most part successful) is the noble script written by Roberto Orci, Alex Kurtzman and Damon Lindelof, and the sumptuous direction of J.J. Abrams.

And even though the film runs longer than two hours, it soars by like the Enterprise’s shift into warp drive. And thanks in part to the illustrative, magical blue tendrils left behind as the vessel soars at the faster-than-light-speed, viewers likely won’t be put off from the messages of embracing diversity or the war mongering parallels of today’s world as they’re being told. Nope, viewers will simply be engrossed by the spectacle of what is happening before them. Star Trek Into Darkness is better than its predecessor; Trekkies and non-Trekkies alike will be most proud. 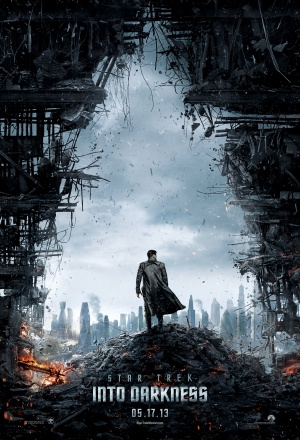