After experiencing a tragedy, a grieving young couple escapes to the Bahamas in an attempt to mend their emotional scars. Nadine (Dree Hemingway, “While We’re Young”) retreats to alcoholism to cope, while her husband Lewis (Lakeith Stanfield, “Get Out”) endlessly struggles to connect with her again. Unknowingly, the two find themselves caught in the middle of a dispute between the island’s patriarch Roy (Robert Wisdom, “Passion Play”) and human trafficker Doughboy (Leonard Earl Howze, “The Lone Ranger”) that could very well put their relationship — and their lives — at risk.

The film in which this takes place, Live Cargo, is a simple movie looking to explore complex ideas. As a newcomer to features, director Logan Sandler manages to infuse enough purposeful style into his narrative, allowing it to be more engaging than one would expect. Consequently, it succumbs to the old cliché of “style over substance,” favoring audience interpretation over spelled-out explanations.

Select moments are impressively constructed, such as the almost dialogue-free opening scene. It feeds you every bit of information you need with a hefty dose of silent, intimate emotion to boot. However, other moments definitely feel underdeveloped. The entire human trafficking subplot shouldn’t feel incidental even though it’s seeded into radio broadcasts heard throughout the film, but somehow it never quite feels organically intertwined with the other characters’ plight.

Thankfully, the principal cast does an excellent job with the minimal script, and they keep the movie from being a complete slog. The two leads aren’t given loads to say (in fact, their scenes are practically vignettes), but the majority of their moments of silence are investing. You’ll also feel genuine sympathy for Roy, whose heart is so golden, you can’t help but like him.

And then you have Myron (Sam Dillon, “Boyhood”) who looks like the creepy love child of Dax Shepherd and the late Miguel Ferrer. Not much is spelled out about his character, but he’s by far the most fascinating one. Not having much to his name, his loyalty is split between Roy and Doughboy, each trying to influence him for better or worse. This is one element of Live Cargo where the ambiguity works, as Myron’s “gray area” morality is the most compelling conflict of the movie.

Shooting a film in black and white isn’t often creatively interesting, but thankfully this choice is one of strongest aspects to Live Cargo. You’re teased with several shots of lush and (probably) colorful environments (including an honestly breathtaking underwater sequence), but much like our main characters, you are unable to experience the full capacity of the location’s beauty. It complements the hauntingly dour tone of the movie instead of distracting from it.

And still at the end of it all, Live Cargo seems to wrap up a little too cleanly. The short runtime doesn’t leave room for much, but I can’t help but feel that these characters had more of a journey to embark on. Sandler shows he has technical flourishes in his arsenal as a director (which makes me curious to see what he can accomplish with a richer script), but as it stands, Live Cargo ends up a competently-acted, yet pedestrian, first effort. 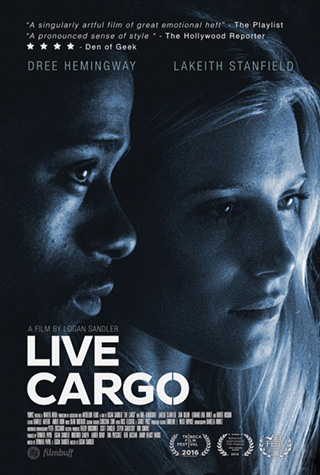