With the success of the day care (of which I still can’t figure out how it was successful), Charlie Hinton (Cuba Gooding Jr.), inexplicably takes a stake in Camp Driftwood — the camp he frequented as a child — when he sees the serious state of disarray it is in. He realizes too late (he remortgages his house) how much renovation the camp needs to be fit for use. So along with his day care partner, Phil Ryerson (Paul Rae, “South of Pico”), he sets out to overhaul the property. This being a comedy, we’re given the typical doses of things breaking, exploding and people getting hurt — none of which is particularly funny.

Once operating (it’s the fastest fix-up I’ve ever seen), they hit a few more snags. After the first day, 90% of the parents pull their children out and demand a refund. To keep the remaining parents placated, Charlie calls in his father, Col. Buck Hinton (Richard Gant, “Norbit”), even though he doesn’t have a relationship with him. With the retired military man running the show, a fun summer camp experience quickly turns to a mini-boot camp. Now we’re given a dose of jokes in which kids are exposed to military jargon and drills — none of which is particularly funny either. And even though the parents aren’t complaining, the bank that floated the loan is. So instead of trying to get more children enrolled into the camp by making the place safer or creating more activities, the brilliant idea of beating rival Camp Canola in the 45th Intercamp Olympiad is lauded as the solution.

All I could do while watching Daddy Day Camp was cover my face in shame. Whereas, the previous movie was palatable, there was simply no way I could stomach this. From my vantage point, Cuba Gooding Jr. has completely lost his mind. Since his Oscar 11 years ago in “Jerry Maguire,” he has taken progressively worse roles. Remember “Snow Dogs” or “Boat Trip”? I do and I wish I didn’t. I hope this is the final nail in the coffin of what should have been a promising career (it won’t be though).

As for the movie itself, there is absolutely nothing heartwarming or fun about it. I can’t think of a single redeeming quality about it. Each and every aspect of Daddy Day Camp was borrowed from another film — originality, I suppose is overrated anyways. What was most perplexing is that for a kids movie, the children starring in this are completely forgettable. There isn’t any standout cute kid, doofy kid or tough guy. They’re all just there, filling space and making mommy and daddy a paycheck.

If you’ve never listened to anything I’ve said before, I ask you to listen just this once. Daddy Day Camp does not deserve your attention. Your children, in the long run, will thank you. For a fantastic summer camp movie, rent the original “Meatballs” — it’s the measuring stick for all comedies of this type. 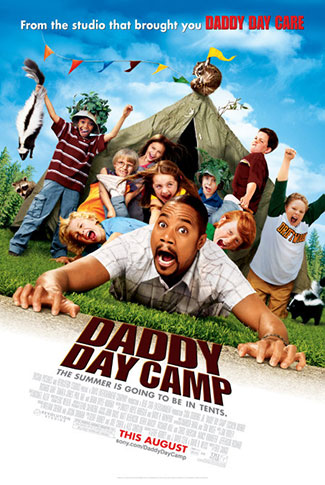