The Hasidic tradition that a child must be raised in a household where there is both a mother and a father is one of the cultural issues brought to the fore in Joshua Z Weinstein’s bittersweet film, Menashe. Co-written by Alex Lipschultz and Musa Syeed (“A Stray”) and set in the Hasidic community in the Borough Park section of Brooklyn using all non-professional actors, the film is an engaging character study that provides rare insight into a society largely hidden from the outside world and a father’s endearing love for his son and the challenges he faces strike a universal chord.

Spoken almost entirely in Yiddish, Menashe (Menashe Lustig) is a widower who wants to live his own life and raise his young son Rieven (Ruben Niborsk) by himself. Unfortunately, the ultra-Orthodox community of which he is a part does not see it that way. In his opposition to Hasidic cultural norms, he risks his son’s expulsion from school and jeopardizes his status in the community. Menashe wants to do right by his son, but the Talmud says that a man needs three things: A nice wife, a house and dishes (presumably no paper plates). Without a wife Menashe has to allow Rieven’s gruff and super critical uncle Eizik (Yoel Weisshaus) to raise the boy. The burly, sloppy-looking Menashe fancies himself as a rebel, refusing to wear a hat and jacket required by Hasidic custom, but he is a rebel without a cause.

Weinstein, however, does not stand in judgment of his main character and tells his story in a straightforward, if not entirely sympathetic manner, but it is a hard sell. Menashe’s job stocking shelves at a local market is barely enough to make a living and his ineptness draws the ire of his boss when one thousand dollars worth of gefilte fish falls out of the van he is driving. In addition, the small unkempt one-room apartment is a dubious environment to raise a child. Menashe feeds his son junk food and sodas for breakfast, but the boy, though critical of the way he treated his mother, still loves him.

The stakes are high, but Menashe refuses to remarry, telling friends that his previous arranged marriage with an Israeli woman was filled with constant conflict and unhappiness and tells a beggar to avoid marriage because “it’s better for your health.” He goes on a date with a widowed mother with children who is not reticent about telling him what a fine husband he would make. When Menashe shows his reluctance to enter into a marriage of convenience, however, she condemns Hasidic men, saying that, “First your mothers spoil you, then your wives.” Menashe appeals to the rabbi (Meyer Schwartz) but he is unyielding. Eventually he takes pity and offers a compromise: Rieven can stay with Menashe for one month, but if he hasn’t remarried after the anniversary of his mother’s death, the boy must return to Eizik.

Desperate to prove himself to be a worthy father, Menashe asks the rabbi if he can host a memorial for his deceased wife in his small apartment. Reluctantly all agree that “even a bear can learn to dance.” Menashe raises complex issues about the conflict between social acceptance, religious dogma, and human needs and desires. Unfortunately, the film’s running time of eighty-two minutes seems inadequate to explore the complex issues the film raises. Weinstein, however, does not want to go there. He said, “I was interested more in the non-plot elements than the plot of the film. It was about the texture, the anecdotes, faces, moments.” These poignant faces are moments we cannot forget. 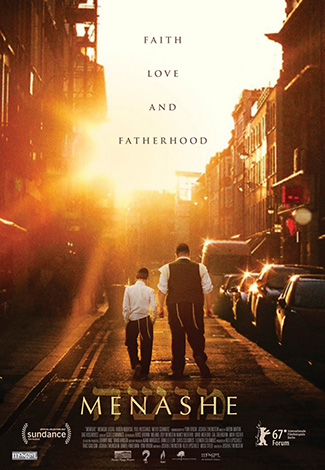