It is not often that one has reservations about a movie adaptation of an epic Stephen King novel series. Sure, there have been a few misses along the way (bound to happen considering how large King’s bibliography is), but it has been quite some time that a movie-going mishap has registered so profoundly as it has with the tedious and brooding, The Dark Tower. Relentlessly stiff, incoherent and sluggish, The Dark Tower is a piece of myopic mythology that dissipates into a bombastic bore. Although the film sets its sights on translating its philosophical complexity into grand surrealist entertainment, this flaccid science-fantasy western totally misjudges its thematic good versus evil mantra.

Both devoted followers familiar with the material in King’s series and newcomers will be dumbfounded by the forced, indescribable symbolism. Simplistically, the foundation for this tepid doomsday action-oriented, horror-ish fantasy involves a mysterious tower that functions as an apparatus for preventing the power of darkness from conquering all the known universe. Joining the tug-of-war for the preservation of the Dark Tower’s operational importance are a couple of caustic cads dressed in flashy black garb. First, there is the stoic and handsome cowboy personality known as Roland/“Gunslinger” (Idris Elba, “Beasts of No Nation”), the last of his “knightly” kind. Facing against him is the roguish sorcerer Walter/“Man in Black” (Oscar winner Matthew McConaughey, “Dallas Buyers Club”) who wants to bring about the start of the apocalypse so he can rule with impunity.

The premise finds the nefarious “Man in Black” planning to eradicate the majestic properties of the tower (thus unleashing the ominous darkness on the Keystone Earth) by manipulating the minds of impressionable children. Aiding in his quest to overtake the Dark Tower is his diva of deception, Tirana (Abbey Lee, “The Neon Demon”), and his horrific henchmen (rat people in reality) that don human-looking skin suits (preferably white to signify safety and trustworthiness). Their mission: To roam about the Big Apple region and kidnap unsuspecting kids with psychic talents to fuel the weapon that can overpower the aforementioned tower. One child in particular — Jake Chambers (Tom Taylor, “Doctor Foster” TV series) — is the next Boy Wonder on the list who the maniac minions want to kidnap off the New York City streets.

The only hope that Jake has to stop the insidious intentions of Walter and his human-rat tag-a-longs is to enlist the help of the gritty “Gunslinger” who he sees in his visions and have him utilize his resourcefulness and gun-handling skills. Thankfully, a Brooklyn-based portal allows the fleeing Jake to travel to the post-apocalyptic world known as Mid-World to join up with his holster-hipped hero.

Unfortunately, The Dark Tower has nothing distinctively new to offer the masses that they have not seen before in prior fantasy actioners that range from “The Lord of the Rings” film series to the special effects high-wiring of “The Matrix” trilogy. In short, the bad versus good novelty that exists between Elba’s gloomy “Gunslinger” and McConaughey’s mockery-ridden “Man in Black” runs its course quickly. The deadpan delivery of Elba’s Gunslinger is a signature gesture that works its magic just slightly. McConaughey’s scheming evil-doer has some cheesy swagger that tends to kick into over-the-top gear all too frquently. Still, the colorful give-and-take between the battling salt-and-pepper leading players is upstaged by the grim presentation of the tower, the head-scratching mythological mumble-jumble being perpetuated and the inclusion of the freakish demonic cretins that look like weird-looking tree creatures and fiendish rat-looking ninjas.

Consequently, while the orchestrated action sequences are serviceable, director Nikolaj Arcel (“A Royal Affair ”) awkwardly meshes together a woefully disjointed vehicle rooted in manufactured vengeance and a vague, sardonic spirituality speculating on raging masculinity. Curiously nothing seems to make much sense or at least address the motivation behind why this chaotic concoction exists or the reasoning behind why Walter wants to contribute to the ruination of the tower in the first place.

The seven book “The Dark Tower” series may be a source of literary truth, tension and triumph for fans of Stephen King’s, but the film adaptation will prove to be a puzzling sell for unaware casuals that may find this western-science fantasy wasteland an atmospheric but underwhelming, meandering, drab Disneyland-like ride saddled with synthetic thrills. 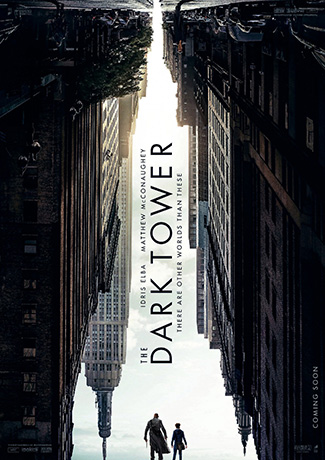