It’s not always easy to do the right thing, even in a stable world. When the going gets tough, you know you’re supposed to do what’s right, but instead you do wrong. That’s the unfortunate reality of our responses to everyday situations . . . but what happens when your support system is gone? What happens when the life you knew is instantly taken away and you’re given a new life that doesn’t promise your ultimate security?

These challenging questions (and more) are explored in writer-director-producer Cary Joji Fukunaga’s new film Beasts of No Nation, which is based on the 2005 novel of the same name by Uzodinma Iweala. Fukunaga (who also directed the 2011 remake of “Jane Eyre” and the acclaimed first season of HBO’s “True Detective”) and his team of filmmakers introduce us into the already crumbling world of Agu, a young and timid African boy (from an unnamed country) who loses his family in the midst of an escalating war. Now desperately running for his life, Agu is soon captured by a treacherous rebel group and is suddenly groomed by its imposing leader who is simply known as “Commandant.” He is solidly played by the steadily surging Idris Elba, (“The Gunman,” “Thor: The Dark World”) who was recently nominated for a Golden Globe for this role.

The adventures of young Agu whimsically takes us from creating parodies of American soap operas (via one of his main forms of entertainment called “Imagination TV”) to committing acts of violence that’s too hot for TV. For a Californian born filmmaker such as Fukunaga, he seems to be unafraid in creating stories that are set internationally. His feature film debut, “Sin Nombre,” not only examined the culture of gangs and the process of undocumented immigration, but a striking theme that is heavily prevalent in Beasts of No Nation — loss of innocence. As this disillusionment creeps into the life of Agu, we see an overwhelming pain that’s immersed in the incredibly nuanced performance of the young man who plays him, Abraham Attah. While the usually charismatic presence of Idris Elba is more than enough to carry any tale that stars him, this time, Elba is unexpectedly outshined by this previously untrained actor.

Regardless of the critical reception he gets during this awards season, Attah provides an invoking performance that will wrap you with empathy despite an already tragic situation. Yes, what is out of his control might or might not work on your sympathetic heartstrings, but his struggle to grow up and make difficult choices is what will break you internally. It is Agu’s character arc that transcends the film into brilliance — despite a few shortcomings it unfortunately has. Stylistically, the film uses a meandering storytelling technique as its plot unfolds, which is common for most independent films. However, anti-climactic arcs crippled some of the narrative’s ambitions and when these events occur it can render a film uninteresting. It manages to work here because the film’s greatest strength isn’t the in-depth focus of a society torn by war . . . it’s about the effect it has on one individual.

Nevertheless, Fukunaga and his assembled team deserve praise for taking a risk in building a surprisingly understated story and not a classically overhyped one at that. Typically, when movies take this tone, its output is a recipe for boredom — but here, that’s far from the truth. It’s the solid scene pacing, active editing, and visually saturated cinematography (amazingly done by Fukunaga himself) that stand out. And while Beasts of No Nation may not be as bloody as say a Quentin Tarantino film, it’s still not for viewers who are shy about cinematic viciousness. There is much in way of graphic images . . . but that’s not the most disturbing thing you’ll see onscreen. The most disturbing thing gracing the screen is the fictional portrayal of a boy who is the realistic embodiment of grim circumstances that will forever change his life. It is a sad state that plagues the many “Agus” in our world today. 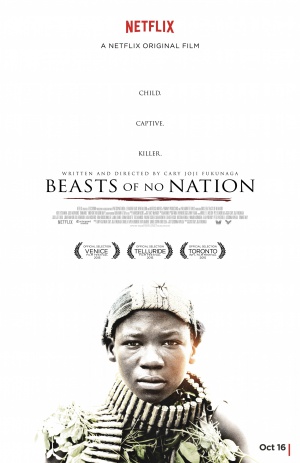