With my folks in town and some time to kill, we decided to sit back and watch the latest Wes Craven psychological thriller Red Eye. Personally, I had absolutely no idea what this movie was about except for the fact it had some shit to do with a plane, a pretty girl and a crazy guy.

So, going into the movie with no expectations, it is safe to come out of the movie feeling lost and confused. Wes Carven has clearly lost his touch. His attempts to build tension are lost. There are quite literally no moments of suspense or feelings of heart-in-your-throat, pulse punding fear. None. Even worse is the slow pace Red Eye starts with. The movie goer is supposed to learn the nuances of our heroine (Rachel McAdams) so that we can build a relationship with her (so we feel bad if she gets killed). This does not happen. Instead, we are dragged through 40 minutes of airport lines and phones calls to the hotel and ultimately left with a ‘why the fuck did I just sit through all that’ feeling.

However, all is not bad. Cillian Murphy plays the part of a ‘killing is my business, it’s nothing personal’ role to a tee. I actually believed he was a cold-hearted motherfucker. Rachel McAdams, America’s newest sweetheart, pretties up the picture quite well. Murphy is an ugly son-of-a-bitch so having McAdams next to him in most scenes does well for the psyche. We’ll have to hope next time she shows us some skin, however.

Overall, the movie is quite the lame duck. You will find yourself second-guessing McAdams every move and literally wishing Murphy kills her for the stupid shit she does. Red Eye is so full of flaws and lack of common sense that you will feel used and abused after watching. 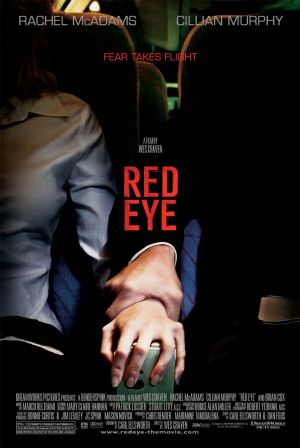