Just what the doctor ordered. A good ‘ole street-banging action flick by none other than John Singleton (whatever happened to him after “Boyz n the Hood?”). His Four Brothers chronicles the actions of 4 adopted boys who seek to exact revenge on the people who killed their adoptive mother . . . a slight twist to the urban action-drama genre.

To say the least Four Brothers delivers on action. Damn near every scene is violent. Not the ridiculous violence you would see in, let’s say, “Rambo,” but more of a grittier, realistic variety. What else could one expect in the streets of Detroit? Aside from the action, Four Brothers actually has some well developed characters. Mark Wahlberg plays the tough guy ‘main’ brother who is always in trouble. Tyrese Gibson is the brother who is in love and searches for affection. André Benjamin is the brother who is trying to claw his way out of the ghetto. Garrett Hedlund portrays the artistic, lost soul brother. All compliment each other and their rapport is touching. When they interacted with one another during calmer times it was clear they all cared greatly for each other. No doubt, as I believe John Singleton crafts relationships well in his movies.

On the downside of Four Brothers is the total lack of police presence. Aside from the few times Lt. Green (Terrence Howard) pops into the movie there is quite literally no cops anywhere. There are quite literally five minute gun battles going on and not a single fucking cop shows up. Now from what I hear the cops in Detroit are basically worthless husks of dried shit, but this takes the cake! Also, Detroit seems to be a barren wasteland. No cars on the roads. No people in the streets. Isn’t this city the 6th or 7th largest city in the country? Lastly, I never knew black people played hockey. I was under the assumption hockey is a white mans sport. But everywhere you look kids are playing hockey. Maybe it’s just Detroit . . . the bizarro world city. Or maybe whitey has lost his hold on all major sports in the country (if you call hockey a major sport of course).

Overall, Four Brothers is quite entertaining even if there are several stretches of far-fetchedness. See it. 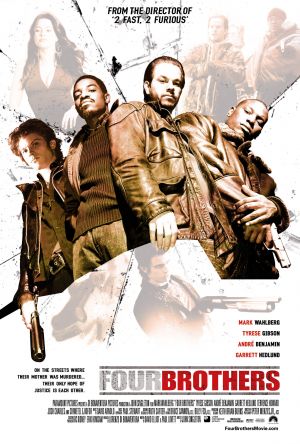