Pierre Morel certainly knows a thing or two about molding celebrated thespians into B-movie action heroes, having previously kicked off Liam Neeson’s twilight transformation into a growly ass-kicker with the first “Taken” flick, but not everyone can make the transition so smoothly. Sean Penn seems an even unlikelier B-pic headliner than Neeson once was, considering that Penn has a pair of acting Oscars under his belt, an occasional directing career that’s been quite successful, and a penchant for dramatic material that doesn’t rely too heavily on fisticuffs, but here he is, joining the club anyway. And something about this marriage of star and role just feels rocky from the start.

Sure, the plot of Penn’s action vehicle, The Gunman, involves a lot of grandstanding condemnation of power corruption and plenty of guilt over the continuing crisis in the Democratic Republic of Congo, all of which seems right up the actor’s alley. But for all of its topical interests, the picture maintains a focus on the staples of B-actioners: Silly posturing, predictable narrative twists, a charmless romance, plenty of shooting, and lots of brutal brawling.

It’s territory that at least Morel knows well, but The Gunman is about Penn and his director trying to meet each other halfway and ending up quite lost in the thick of it. Penn has to dumb down his acting to deliver cheesy lines about nothing and figure out how to most impressively remove his shirt at any given moment, while Morel tries to play things in a more serious vein than he normally does.

Perhaps a generous viewer could pat both guys on the back for attempting to stretch themselves, but the stretching seems to have worn their talents thin. All of the silliness that made “Taken” such a boisterous blast of B-ish charm has been stripped away here in favor of enough earnest grimaces to permanently imprint a scowl on Penn’s worn face. Not that Penn has ever been much of a smiler on camera.

The actor’s visage is curiously juxtaposed against his ripped body, creating an odd hybrid of aging star up top and beefy muscle man below. The workout regimen he must have wholeheartedly dedicated himself to has produced impressive results, though, and as strange as Penn’s decision to become a crappy action hero may be, at least he didn’t skimp on the effort.

Of course, the issue isn’t effort for Morel, either. He still attacks the action scenes with some gusto and even signed off on a sound mix that pumps up the gunshots to extreme levels, generating a raucous sense of danger. But he remains as far from an innovator in the action genre as ever and his strengths require him to play things in a heightened, cheesy key, not in the somber, suddenly self-unaware manner he does here.

Everything about The Gunman is sort of dumbly recycled and all too predictable, but the movie lumbers forward as if it doesn’t care. Stubbornly adhering to the obvious twists and turns of its veteran template, it clearly wants to do everything by the book in spite of having a truly great actor at its disposal. Despite a lot of buildup early on, the story is a straightforward ‘one man army’ tale wherein Penn’s Jim Terrier, who fittingly looks a bit dog-like, has to find out who’s trying to kill him years after he disappeared following a covert hit on a Congolese minister.

Jim was once a part of a security team that did some pretty bad things, but Morel clears the moral air early by showing that, years later, our protagonist has returned to Africa to dig wells and just generally be a helpful guy. His old buddies in the group have gone on to be powerful businessmen who have comfortably shoved their past under the rug, leaving Jim to be the only one with a conscience.

If there was any doubt that Jim was the hero here, we also see him puff up his chest for the woman he loves (Jasmine Trinca, “Saint Laurent”) in front of her slimeball boyfriend (Javier Bardem, “Skyfall”) and are supposed to feel a tinge of sympathy whenever Jim suffers from debilitating headaches. He also likes to show off his pecs and abs, which is such a hero move. Penn, who co-scripted with Don MacPherson and Pete Travis (the trio adapting Jean-Patrick Manchette’s novel “The Prone Gunman”), is a little too eager to paint this action role for himself in transparent shades of black and white.

Working so hard to make Jim’s heroism such a badge of grim-faced honor adds to the strangeness of Penn’s sudden transformation here. He’s a great actor, but he insists on playing this character with little to no subtlety. It’s weird to think that this is where Penn has ended up, especially considering this year marks the twentieth anniversary of what may be the finest performance of his career in Tim Robbins’ “Dead Man Walking.” That old Penn and the Penn of Oscar-winning “Milk,” another of his greatest performances, is entirely absent behind the eyes of this new Penn. There’s a disconnect that makes this whole endeavor feel like a missed opportunity.

Besides, for all of the surprise that Liam Neeson’s turn to B-actioners packed when “Taken” arrived years ago, the actor did have Sam Raimi’s wonderful superhero B-movie “Darkman” on his resume from back before he became a respected drama star. The writing was somewhat on the wall with him. So with that in mind, perhaps Penn, who got his big break in Amy Heckerling’s 80s teen comedy classic “Fast Times at Ridgemont High,” would be better suited for a surprise part as a fiftysomething stoner than a sexy, macho, bicep-rippling hero. Or maybe not. After all, it’s not that Penn doesn’t look convincing with a gun; it’s that he’s being so silly while acting so serious doing so. 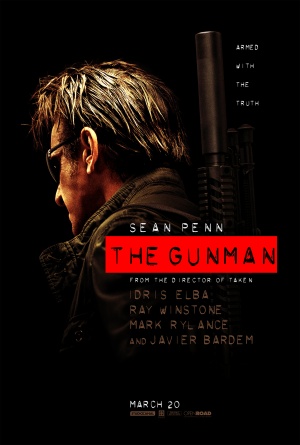