Each time that screenwriter Diablo Cody and director Jason Reitman team up, they create a singular female character that walks onscreen feeling fully formed and armed with lots to say. First it was Ellen Page’s precocious pregnant teen in “Juno,” then it was Charlize Theron’s perpetually perturbed author Mavis Gary in “Young Adult,” and now it’s exhausted, exasperated mom Marlo (Theron again), a character so intelligently and intricately attended to that her story makes Tully no less than one of the greatest movies ever made about motherhood.

Oh sure, it sounds like hyperbole, as any “greatest ever” remark usually does, but a movie so deep in the trenches of child-rearing, so insightfully aware of how best to inhabit its protagonist’s mind without requiring a voiceover to spell everything out, and so powerfully invested in the pursuit of a bright future is the kind of movie that deserves a little hyperbole.

Cody’s script is a gift, a stunning declaration of how much she’s grown and matured as an artist. Her dialogue has always been very coolly clever and there’s much to marvel at in her ability to orbit the entire narrative around one very memorable character, but Tully finds Cody plumbing emotional depths with such wit and wisdom that she seems to speak both specifically and universally in the same breath.

Theron is the perfect vessel through which to expound these thoughts, too. Cody provides such great material and Reitman directs with such a steady, stable hand that many actresses could probably excel in the role of Marlo, but Theron takes every scene to another level. It’s a performance for which enough praise cannot be given. She’s brilliant, a rare performer that layers her feelings so knowingly and naturally that she never limits the emotional complexity of any given moment by playing it in a single key. She’s all keys all at once.

Marlo’s story of parental struggles, of marriage malaise, of constant fatigue reeks of relatability that is then given an additional boost by the uniquely comic sprinklings that Cody and Reitman bring to each familiar situation. When Marlo gives birth to her third child, the movie soon launches into an epic montage that skillfully captures the ceaseless monotony of waking up in the middle of the night to change diapers and attend to a crying baby.

The sequence is equal parts funny and sad, which makes it all the more amazing when Tully turns out to not be a cynical look at what parenting takes away from you, but rather a deeply poignant poem about how parenting can transform a person into something new and astonishing in previously unforeseen ways. Cody even writes some lines of dialogue that express exactly this in clear words, except she coyly covers her metaphors so that the full impact of the movie’s themes and intentions isn’t felt until the very end.

Much of what makes Marlo’s arc so satisfyingly engaging and compelling is how Cody and Reitman use the introduction of a titular night nanny (Mackenzie Davis, “Blade Runner 2049”), a present paid for by Marlo’s wealth-flaunting brother Craig (Mark Duplass, “The Lazarus Effect”), as kindling for character development. Marlo rejects the idea of a stranger taking care of her newborn at first, but once the aforementioned montage sequence leaves its mark, she finally breaks down and makes the call.

Davis’s Tully shows up at Marlo’s door with a fresh face and a whimsical personality, someone seemingly too young to be up for such a daunting task and too good at her job to be true. But there she is, night after night, rescuing Marlo from the mess she’s in. The house gets cleaned, the baby is happy, and Marlo gets some much-needed sleep. She begins to regain the energy she lost along the way. At one point, Marlo mentions that it’s as though she can see color again, a cute comment that then manifests itself cinematically when Marlo starts wearing makeup again and literally becomes more colorful.

Marlo’s rejuvenation unfolds in tandem with the budding friendship that she builds with Tully. These are two people at distinctly different points in their lives that find they can help each other. Considering what Cody and Reitman have in store for later in the movie, the relationship between these two women is even more special when observed in spoiler territory.

Theron’s performance certainly doesn’t suffocate her costars, either. Davis matches her at every turn, exquisitely capturing Tully’s unique blend of innocence and honesty. Ron Livingston (“The Conjuring”) plays Marlo’s husband Drew, who is mostly defined by working all day and playing video games at night, but Livingston brings such warmth and realism to his portrayal that Drew never feels like a caricature or a cliché. This isn’t his story, but the love he has for his wife and kids comes through so sweetly that he proves to be an intrinsic part of the movie’s beautifully beating heart.

That heart grows throughout Tully, to the point that it becomes nearly overwhelming by the third act. Marlo is such a rich, rounded character and Cody’s incisiveness is so smartly applied and Reitman’s directing is so gracefully assured and Theron’s performance is so comfortably complete that every piece connects so carefully to create an emotionally enriching whole.

What appears to begin as a darkly comical look at the challenges of parenthood eventually blossoms into a profoundly hopeful statement on the importance of self-love and the power of simply staying close to your family. Cody and Reitman seal it all with a hug and a shared earbud. It couldn’t be simpler and I’m honestly not sure it could be any more momentously moving. It’s such a small gesture, such a tiny glimmer of promise for the long journey ahead, and yet it speaks volumes about the small steps we take to get back on the path to happiness. 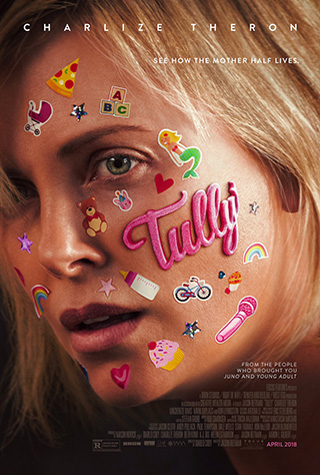