There are few certainties in life — death, taxes, senioritis striking schools in May (or January, as the case often is) — and one of the more distinct certainties in the world of horror is what happens when you contact the dead. Whether you’re playing alone with a Ouija board, sitting with a psychic at a party, or simply saying goodnight to your dearly departed just before bed, you open yourself up to the rest of the spirit world, and in horror movies, this is a gigantic no-no. In fact, by now, I’m pretty certain Randy from “Scream” would make it Rule #4: Don’t ever talk to the dead. The results are always unpleasant.

Such is the case for Quinn Brenner (Stefanie Scott, “No Strings Attached”) in Insidious: Chapter 3. Quinn is an ambitious teenager whose dream is to attend a prestigious theater school and to become an actress. She lives with her hardworking, but frazzled, father Sean (Dermot Mulroney, “August: Osage County”) and typical pain-in-the-neck younger brother, Alex (Tate Berney, “Just Before I Go”). A year and a half ago, Quinn lost her mother to cancer, and she has been desperate to contact her. She seeks out a medium for help, and that medium is reluctant Elise Rainier (Lin Shaye, “Ouija”), who has sworn off speaking to the spirits. However, Elise takes pity on young Quinn, and decides to try. Shaken by what she encounters, Elise stops the session and sends Quinn away with a warning to stop trying to speak to her mother: “If you call out to one of the dead, all of them can hear you.” Of course, despite Elise’s warning, Quinn still calls to her mother’s spirit at night, and opens herself to attack. She spots a strange man waving at her from the stage rafters at her audition, and again, later, when she’s walking home with a friend. When an unfortunate accident renders her homebound for recovery, she discovers that someone is definitely trying to connect with her — but it’s not her mother after all.

“Insidious” exploded onto the horror scene in 2010 in good company with other atmospheric slow-burners like 2007’s “Paranormal Activity,” and 2008’s “The Strangers” and a new appreciation for the art of suspense was born. Intense special effects and super-high budgets were eschewed for the classic use of darkness and storyline and (gasp) acting and writers/directors/producers like Oren Peli and James Wan became household names. To that list add Leigh Whannell, if he wasn’t there already.

For Insidious: Chapter 3, writer Whannell, in his directorial debut, takes the reins from Wan and the franchise doesn’t skip a beat — the characters, story, and levels of suspense are as effective as ever. That’s no small feat as “Insidious” and “Insidious: Chapter 2” were blended chronological stories, and Insidious: Chapter 3 is a prequel to those tales, set a few years before the Lambert haunting. Elise, grieving her own personal loss, is now more of a central character in this film, helping to bridge the gap to connecting to the new family (she can relate to Quinn’s desperation to speak to her mother just one more time). Also returning to the mix is the dynamic supernatural-seeking duo of Specs (Leigh Whannell) and Tucker (Angus Sampson), who arrive on the scene to help Sean rescue Quinn from the clutches of the demon that has attached itself to her just as they did with Lambert father, Josh.

Incredibly, the familiar formula of comic relief and well-placed jump scares continues to work in the third installment even though the frights conjured up this time aren’t the type to dig into your brain and leave you lying awake horrified late at night. The jumps and atmosphere of Insidious: Chapter 3 are still plenty good, however, to render audiences silent with anticipation, and the joyous stress release of gasps and laughter afterwards make the film a fun, effective horror entry.

Horror fans struggle enough to find effective, quality stand-alone films and that possibility suffers even more with sequels, so to be gifted with both is a rare, rare treat we’ve come to expect from producers Jason Blum, Oren Peli, and James Wan (keep an eye out for his cameo as the director for whom Quinn auditions!). Leigh Whannell, who wrote the brilliant “Saw,” engaging “Saw II,” and tensely incredible “Insidious,” among others, has cemented himself as one of the greats in horror. Insidious: Chapter 3 is absolutely worth seeing, and is a fine addition to the franchise. 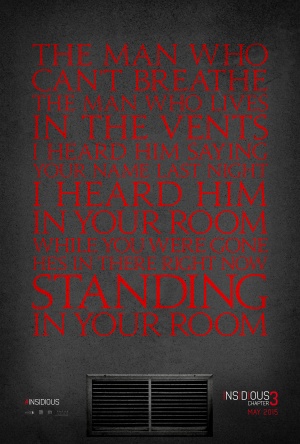