After such critical bombs and/or not very good comedies as “The Hangover Part III,” “Tammy” and “Identity Theft,” there’s finally a Melissa McCarthy vehicle we can smile and laugh at — intentionally. Unfortunately, her latest turn in the new Paul Feig (“Bridesmaids,” “The Heat”) directed film, Spy, as an unprepared, mousy analyst/secret agent, loses those laughs the longer the production carries on.

She is Susan Cooper, a perky, cheerful CIA desk jockey who excels in computer security as well as protecting charming deep cover spy colleague Bradley Fine (Jude Law, “Black Sea,” giving his best screen test for the next 007). Like Bond and Miss Moneypenny, however, she is crazy for him, but he just plays with her affections.

The duo works well enough to solve some big international threats, until he is offed by a glamorous Bulgarian arms dealer Rayna Boyanov (Rose Byrne, “Neighbors”) who is selling an atomic bomb of some sort to a sleazy terrorist. The shock causes Susan to offer to go into the field, impressing her boss, Allison Janney (“The Way Way Back”), as well as stunning other male agents, including the arrogant and often-psychotic Agent Rick Ford (Jason Statham, “Furious 7”), who brags constantly about how many times he’s almost been killed or has actually died.

Put under various deep covers as a dumpy Mary Kay sales representative or a lonely cat lover (some of which work better comically than others), Susan actually begins to succeed in rounding up suspects and getting closer to solving the crime. Of course, this takes a suspension of disbelief wider than the Grand Canyon, considering she is able to battle (and defeat) professional killers and henchmen (and women), fly airplanes and helicopters and skillfully operate automobiles and motorcycles at high speeds through the narrow streets of Paris, Rome and Budapest, among other European capitals.

All of this is well and good, but when the light comedy of Spy crosses over into deep pain material, it can be a very uncomfortable experience. For instance, characters here get stabbed, shot, thrown from great heights, sliced, bludgeoned, burned and mangled in various ways (a guys gets his ankle snapped while Gabe from “The Office” [the US version] is forced to drink a concoction that causes his throat to graphically dissolve).

The more this happens, the less funny it all becomes. So much so that any fun you might have had at the beginning of Spy dissipates long before this manic nonsense concludes. 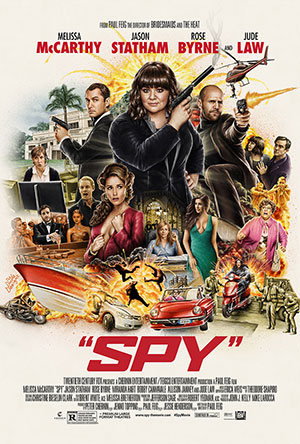