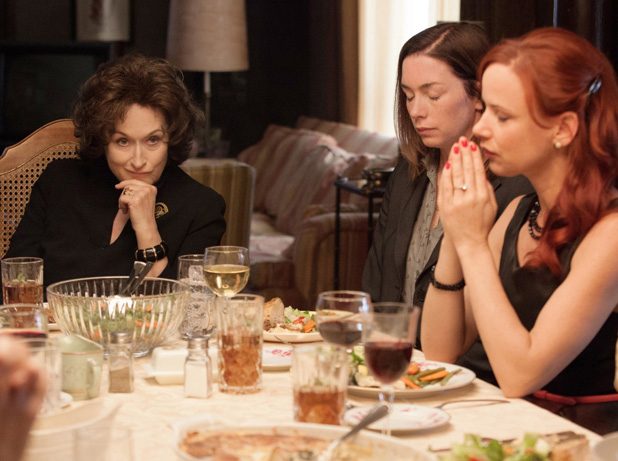 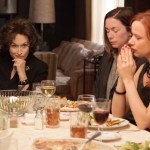 A dinner from Hell.

When it comes to tales of familial strife, movies sure love to put the fun in dysfunctional. But in the dark, depressing August: Osage County, the Weston family settles for nothing less than the whole word. There’s nothing particularly fun about this group, not when it’s just matriarch Violet (Meryl Streep) screaming at patriarch Beverly (Sam Shepard), suggesting in her R-rated outburst-y way that he should fornicate with a pig and certainly not when the whole gang gets together later in the movie after Beverly decides that he’d rather jump in a lake than take Vi’s advice. This is a sad, angry group of people who all deal with the madness of their relationships in their own ways, making August: Osage County a multi-faceted ensemble full of fiery emotion.

This gives the large and mostly impressive cast a lot to work with, something that proves crucial to the movie’s success as director John Wells seems committed to flashy performances and comical explosions above all else. As adapted by Tracy Letts from his own Pulitzer-winning play, August: Osage County is about as stagey as movies get. Wells is only interested in his actors, which is somewhat understandable given the all-star cast he’s assembled, but this does mean the movie struggles to define its tight, claustrophobic setting in remotely cinematic terms. Static camera setups and artless edits abound, so we all turn to the actors for some help in wading through this mess.

Such help does arrive, thankfully, mainly in the form of Julia Roberts, who has never been so furiously intimidating and yet so convincingly vulnerable as she is here. The tightrope she walks as Vi’s eldest daughter Barb may be the most challenging of her entire career, so it’s fitting that the result may be her bravest performance. She brings a weariness, a singularly personalized frustration to every moment and each exchange, but when pushed too far, she channels that internalized pain into a fury that can consume a scene.

The movie’s other great performance is a more timid, quiet portrayal courtesy of Julianne Nicholson, who fills middle sister Ivy with a soft, gentle energy that somehow still belongs in this emotionally explosive madhouse. Ivy has a sense of a life sacrificed for her parents since she’s the only daughter to have stayed close to home, giving up the opportunity to leave this dead-end, unhappy existence behind in order to help out where needed. Ivy can take solace in knowing that her sisters who did eventually leave town aren’t particularly happy now either, but it’s no matter. Ivy wears her burden dutifully and brings a patient optimism that her family sorely needs. Nicholson is a joy to watch in her own understated way and when it comes time for her to open up, it’s heartbreaking because she represents the tragedy of fragility in this icy brood.

Juliette Lewis rounds out the trio of sisters as Karen, a wide-eyed dreamer trying desperately to reconcile her personal issues by clinging to some hopeless romantic ideal. She’s recently exited an abusive relationship and has fallen into the dubious arms of Steve (Dermot Mulroney), who has mastered the art of disguising his sleaze under a layer of do-gooder charm. Lewis plays her character as a somewhat vapid and squeaky shell of a woman, but instead of settling for cheap laughs, her Karen feels wretchedly wrecked, another victim of her surely troubled upbringing now saddled with a distorted concept of love.

And then there’s Streep’s Violet, a caustic, cutting presence whose tragedy is that she’s been diagnosed with cancer of the mouth, both literally and figuratively. Vi has chosen a dark wig that she wears like a portent of doom and she spits venom at every family member too pitying to ignore her. Streep’s early scenes play like a bit of warm-up for both the character and the star, the nasty shtick beginning to take hold in loud, scurrilous moments that build until we reach the big dinner scene, a sort of decrepit centerpiece for the whole picture during which Violet insults every damn person at the table and especially aims to tear each of her daughters apart.

Yes, it’s all a little beyond mere dysfunction at this point. Whatever mood or attitude August: Osage County is targeting is somewhat unclear as Wells oddly obscures the dramatic intent by refusing to put any sort of directorial stamp on the proceedings. The dinner scene is a mangled mess of a dozen or so shots that have been detrimentally assembled into a barrage of actorly attacks. Holding a few of the shots for more than half a line could encourage the various performers to play their energy off of each other, but instead, we get endless edits that chop up the experience into an awkward jumble. 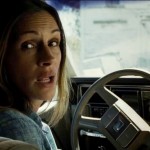 So herein beats the heart of the movie’s intertwined strengths and weaknesses. Wells’ approach is an uninspired, clunky one, but the actors, at least the main women, are magnetic. They make up for the movie’s shortcomings by responding with such gracious power to Letts’ adaptation. The rest of the cast does mostly fine work with Ewan McGregor a relatively weak point and Abigail Breslin, younger than nearly everyone in the cast by about twenty years (or much more in many cases), simply unable to hold her own against such towering thespians.

The movie comes to rely on Roberts and Nicholson, especially, and Wells lets Streep take Vi to whatever wacky, crazed places she sees fit. It’s tough to say that Streep’s performance works, but it’s undeniably memorable at the very least. The dark, nasty tone that hangs over every scene feels somewhat dully exhausting from quite early on and Wells seems to deflect any desire to bring a more cinematic sensibility to the picture, so a great movie August: Osage County is not. Thankfully, it has a few great performances, the most moving of which provides a reminder that Julia Roberts, the fading mega-star, has in her some tremendous acting talent that has often been eclipsed by her fluffy roles. A powerful score by Gustavo Santaolalla also lends the movie some emotionally charged notes. The pieces don’t all add up at times, but like the family it’s focused on, the movie is a mess that strangely still endears. 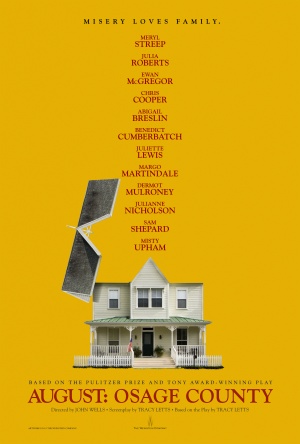