Biopics are a bit of a conundrum, aren’t they? On one hand, they seem like ideal fodder for movie adaptations since the subject of the film will likely carry a guaranteed audience, especially when popular musicians and bands are the focal point. But on the other hand, how can one film possibly be adequately succinct and still encompass enough to satisfy the expectations of that crowd of fans?

Luckily, with the new Brian Wilson-centric, Love and Mercy, a fittingly harmonious balance in this field is reached. Instead of following one linear storyline through the film, we instead are shown two pivotal glimpses into the Beach Boys songwriter’s life — one spanning from the heyday of the California rock band as a young Wilson (Paul Dano, “Prisoners”) composed the monumental Pet Sounds album in 1966 and spiraled toward the ill-fated follow-up record, Smile, and the other centered around a middle-aged Wilson (John Cusack, “The Raven”) in the 1980s out of the public eye and under the close watch of his therapist, Dr. Eugene Landy (Paul Giamatti, “San Andreas”).

With this, the creative forces behind Love and Mercy establish a kind of compromise that is likely to appease die-hard Beach Boys fans as well as casual cinema-goers. By depicting the hugely prodigious and perhaps best-regarded period of the band’s career, fans will get their fill of songs they love as well as a visualization of the mythology surrounding this era. Likewise, more casual viewers will be equally transfixed on the dramatic center of the film in our protagonist’s haunted mental state and as the more mature Wilson finds love in Melinda Ledbetter (Elizabeth Banks, “The Hunger Games: Mockingjay – Part 1”) faces his demons and tries to piece his life back together.

But more than that, there is a real sense of artistry achieved in this film, and that can be something of a rarity in this somewhat constrictive biographic formula. As the movie opens, we are shown a one-sided view of what could presumably be an interview with Wilson around the time of Pet Sounds, but we only see Dano. Was there anyone else there asking a question, or was that just a conversation with himself? Fittingly, as we transition into the main part of the film, this suggested theme is brought to the forefront as the audience is merely shown a blank screen, yet we begin to hear faint traces of voices and of music creeping in all around us, seemingly without origin — a glimpse into the complex mind of Wilson himself.

All things considered, Love and Mercy may inherently work best for Beach Boy-fanatics or pop music nerds. There are occasional moments of gratuitous inclusions for fan-service that play about as well as dramatizing a passage from a Wikipedia page. However, the strength of the film’s dramatic current along with the palpable earnestness of the principal actors make this more of a nitpick than anything. And if we’re all being honest, what biopic doesn’t have a few of those moments?

Boasting a uniquely enthralling sense of storytelling and some, frankly, spellbinding performances by our four main leads, with a special emphasis on Paul Dano’s young Brian Wilson, Love and Mercy stands as a heartbreaking trek into the delves of tragedy and the empowering, romantic story of a way out — the perfect formula for a great biopic. 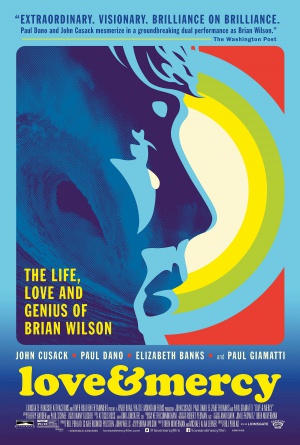