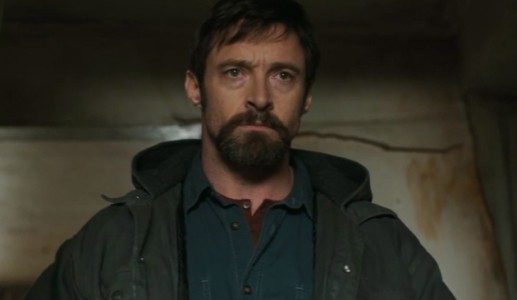 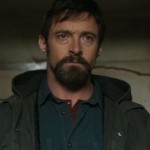 A father with nothing to lose.

How far would you go to find your child if he or she were missing? What laws would or should a parent break to make sure they could have their babies back again? These are the fundamental questions asked in the newest film directed by Denis Villeneuve (“Incendies“), Prisoners, which tells the tale of a couple who have to deal with the sudden disappearance of their daughter.

And while the answers may not be as satisfying and/or as cut-and-dried as many of us would like (especially those who do have kids), the journey — while a bit long and convoluted at times (it is sort of a “Gone Baby Gone” meets “The Silence of the Lambs“) — it is nevertheless fascinating and populated with terrific performances, so don’t be surprised if the Academy of Motion Picture Arts and Sciences comes calling with a few nods next January.

Hugh Jackman (“Les Misérables“) and Maria Bello (“Grown Ups 2“) are Keller and Grace Dover, who discover their six-year-old daughter, Anna, and her friend, Joy, are missing. After several days, however, the parents are naturally becoming more and more frantic. Enter Detective Loki (Jake Gyllenhaal, “End of Watch“), who has no life and therefore is the best at what he does — relocating missing persons. Following up on a lead, he tracks down an old RV that was recently parked on the Dover’s street (it turns out the girls were playing on it before they went missing), and arrests the owner, the mentally defective Alex Jones (Paul Dano, “Looper“).

Much to the chagrin of Keller, though, the police are forced to release Jones after 48 hours because there is no real evidence to continue to hold him, plus they do not think he has the wits to kidnap two little girls, keep them quiet AND outwit the cops.

Incensed, Keller resorts to what he believes is his only option, kidnapping Jones himself and torturing him into revealing what he knows about the alleged abduction. These scenes, along with the parents’ reaction after the girls do not return home are among the most riveting and graphic of the film. What Keller does to Alex in an attempt to gain information seems justified and necessary to anyone who has children, but repellent to anyone who believes in basic human rights. It’s a thin line Villeneuve tries to walk — with varied success. It also begs the question of just how effective torture actually is, considering most people — after a while and enough pain — would confess to just about anything. 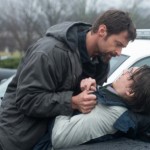 Dark and oppressive, yet equally suspenseful and powerful, Prisoners may not have the best ending and may leave many with a bad taste, but it is effective as a thriller nonetheless. Jackman is both sympathetic and compelling as the father driven beyond all reason to find his daughter; Dano shines as the illiterate man-child who may know more than we think, while Gyllenhaal gives his best performance since “Zodiac.”

The pacing too is a bit choppy, it could have used about 20 minutes shaven from its length and is certainly not a wonderful time at the theater, but Prisoners is a picture that will definitely be on many “Best Of . . . ” lists and will most likely be nominated in several categories come award time, so it’s worth a look on the big screen. 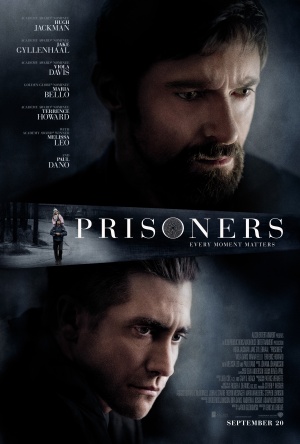