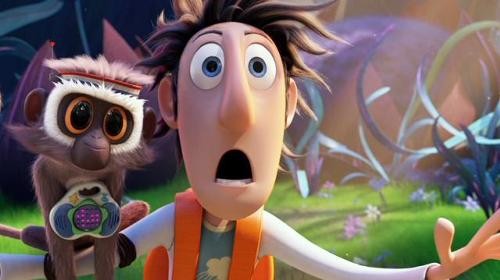 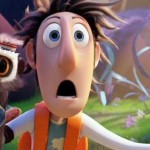 Making the mess is always a lot easier than cleaning it up. The residents of Swallow Falls are finding that out in Cloudy with a Chance of Meatballs 2 as it picks up right where “Cloudy with a Chance of Meatballs” left off — the water-to-food making machine disabled and the town overgrown with foodstuffs. But watching goofy animated people sweeping streets is hardly reason for a sequel, no, new food-based wonders abound this time around.

And they come in the forms of wildly bizarre creatures like tacodiles, cheespiders, mosquitoasts, shrimpanzees, susheep , flamangoes and a host of others with munchies-inspired names. Apparently, the Flint Lockwood Diatonic Super Mutating Dynamic Food Replicator (FLDSMDFR for short) has reawakened and is now manufacturing sentient beings while Flint (voiced by Bill Hader, “Men in Black 3”), Samantha (voiced by Anna Faris, “I Give It a Year”) and the rest of the crew including but not limited to Brent (voiced by Andy Samberg, “That’s My Boy”) and Earl (voiced by Terry Crews, “The Expendables 2”) have taken refuge in San Franjose.

The kids will love the silliness and vibrancy of Cloudy with a Chance of Meatballs 2 but, unlike the first go round, the parents won’t be so satisfied. The originality and innocence is conspicuously missing. The romantic spark that brought together Flint and Sam doesn’t produce any flames although they get to enjoy a lover’s spat and the father-son relationship between Flint and Tim (voiced by James Caan, “Elf”) doesn’t hit the emotional highs that resonated so well with those of us that haven’t had the best lines of communication open with our parents.

In their place is Live Corp Company’s antagonist Chester V (voiced by Will Forte, “The Watch”), a man intent on using Flint’s invention for his own nefarious purposes, and his orangutan sidekick Barb (voiced by Kristen Schaal, “Sleepwalk with Me”). Much of what progresses feels very much like an adventure through “Jurassic Park” where the talented animators at Sony Pictures Animation were told to go wild but keep their creations sanitized and safe for the children. 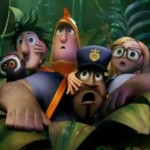 There be “foodimals” here!

Thankfully, the voice talent is able to elevate the oft-seen visual gags captured by directing duo Cody Cameron and Kris Pearn, and the quick-fire pun retreads written by new writers to the series Jonathan M. Goldstein and John Francis Daley (I say series because I cannot imagine a third and fourth aren’t already being planned). Kristen Schaal is probably the best of the lot but the returning talents of Anna Faris, Bill Hader and James Caan keep close pace. And as much as I like Terry Crews enthusiasm, I preferred Mr. T as the athletic cop turned barista turned cop again.

Even though the title Cloudy with a Chance of Meatballs 2 would make it seem that little thought went into the film (other than studio execs thinking of another possible money windfall), there is a considerable amount to take in. Problem is, it is exceedingly average and tastes like warmed up leftovers from the night before. If, however, one is obliged to take this in, catch it on a matinée — it isn’t worth the full price of an entrée. 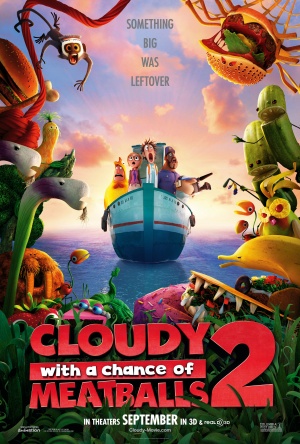