A good rock song, like any piece of art, can make its mark in one of two ways: It could innovate and expand the parameters of a tried-and-true formula, or it could stick to the established conventions and attempt to find its synergy in the charisma of the artists and performers. If one were to apply the same rule to movies, Jonathan Demme’s Ricki and the Flash would certainly fall into the latter category.

The story centers on Ricki Rendazzo (Meryl Streep, “Into the Woods”), a middle-aged musician whose rock star dreams seduced her away from a husband and three children. Years later, Ricki’s aspirations have anticlimactically amounted to playing regular gigs of cover songs in a bar with her band, the Flash while balancing a menial cashier job during the day. But things get shaken up when ex-husband, Pete (Kevin Kline, “Last Vegas”) calls about the couple’s daughter, Julie (Mamie Gummer, “The Ward”) who is having marital issues of her own. Ricki then travels back to Indianapolis to help her daughter and try to find her place in the family she walked away from so long ago.

As one might be able to tell by looking at the set-up for this story, this is a song we’ve all heard before — an archetypal redemption story, in this case, focused on a character who is somewhat of a cliché in herself — a musician who never grew up and doesn’t fit in with her peers. But although the plot is nothing revolutionary, Ricki and the Flash has an inherent sense of charm that can’t be denied.

Meryl Streep’s performance may be, predictably or not, the main point of interest for the movie at large, but mainly because it’s a bit of an unexpected role for her to take. There are many characters Streep can and has played throughout the years, but a rocker is one that might have been a bit more difficult to have envisioned prior. However, she nevertheless embodies the role of a working-class musician wonderfully, and more importantly, she is completely enthralling as a singer in a rock band belting out tunes including a searing version of Tom Petty’s “American Girl” and, oddly enough, a garage band rendition of “Bad Romance.” So, if you’ve ever wanted to hear Meryl Streep sing Lady Gaga, this is the movie for you.

That being said, if there is one main misstep taken in Ricki and the Flash it’s not that they stuck too much to an established formula, but rather that they maybe didn’t stick to it enough. With a film like this, it would be pretty easy to estimate how the film might be resolved at the end, and there are no surprises in that regard. Yet there’s something a bit off in its execution.

It might not be too much of a spoiler to say that there is a moment of reconciliation and assimilation of sorts at the close of the movie, but the problem is that when this moment comes, it feels unearned — almost as if there were some scenes skipped in the shooting or editing of the film to give it a snappier finish. As such, it leaves one with a rather peculiar aftertaste to puzzle over.

All told, Ricki and the Flash offers a lot of fun and hits enough of the right notes to keep you bobbing your head along for the duration of the movie, but this tune isn’t likely to stick in your head for long. 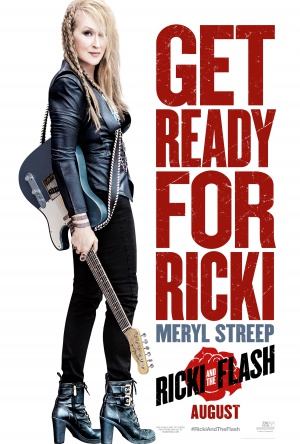