Movies can’t always be cut and dry. It’s often easy to walk away from a film and declare whether or not you liked it or whether or not it was effective, but every now and then, there’s a project that cannot be so easily labeled. For better or worse, this is the case with Like Sunday, Like Rain.

The film, simply enough, follows the story of two lost, wayward souls. Eleanor (Leighton Meester, “The Judge”) is a down-on-her-luck 20-something who has just broken up with her washed-up boyfriend (Green Day frontman, Billie Joe Armstrong) and lost her job. She soon finds a live-in gig as a nanny for a disillusioned 12-year-old musical prodigy, Reggie (Julian Shatkin). The two form an unlikely bond and begin to find that they have much more in common than they would have initially predicted.

Although the plotline relies on a straightforward and wholly relatable conceit, the main issue with the bulk of this film is found in the writing. Whether it be the dialogue or the melodramatic conflicts in the story, everything here feels a bit too precious, overwrought and sometimes a bit misguided.

In keeping with the rather pretentious-sounding title, Like Sunday, Like Rain often suffers because our two main leads carry so little naturalism that they can’t exist as anything other than fictional constructs spouting off a series of endlessly laborious dialogue. This, however, is not the fault of Meester or Shatkin who each convey their highfalutin repartee with earnestness and genuine emotion. And with this, their performances are easily the highlights of the picture.

Yet despite the commitment of our two leads and despite the fact that this film relies more on emotion and tone than story, there are some, frankly, odd character moments taken that largely play as non sequiturs without any sort of pay-off. For instance, in one scene, Eleanor is bothered by her ex-boyfriend while babysitting Reggie. As a response, Reggie attempts to console his caretaker by telling her that his family’s driver has some sort of tie to the mob, and if she needs some help with her pestering ex, the driver could, as they say, ‘take care’ of him.

With information like this being given to us, a viewer might normally expect some kind of progression to be delivered later in the story. Perhaps Reggie tells the driver to carry out this favor and there are some repercussions to be paid, or maybe Reggie simply isn’t as innocuous as he first seemed. But as it happens, Eleanor simply declines the service, and the idea is never brought up again.

But in spite of its perplexing and pretentious qualities, one can tell that this project has a lot of heart and feeling put into it. In fact, whether intentional or not, the film often recalls the dreamy sentimentality and similar plot of John Carney’s “Once” with the two movies even sharing a nearly identical conclusion. Like Sunday, Like Rain would have certainly benefited from the more natural improvisational approach of its counterpart, but nevertheless, the two share a distinct charm.

“Like Sunday, Like Rain” is an unavoidably flawed and clumsy movie, but it is endearing for what it’s at least trying to accomplish. Still, you’re probably better off checking out “Once” if you haven’t seen it yet. 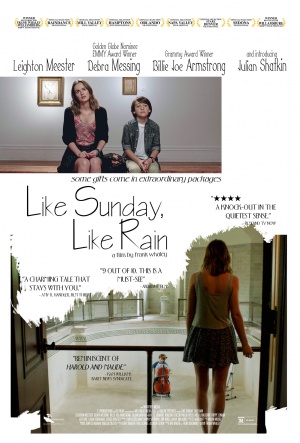