It can be a tricky thing to review horror films. The red-headed stepchild of the movie business, horror is an incredibly subjective genre for fans. Despite repeatedly being let down by film after film, we return to the theater with each new offering, hoping for a gem — a new classic. Remakes are especially daunting undertakings, as the new version is up against fiercely loyal fans who judge a new film by its poster, well before the first images even grace the screen. Add to these challenges book adaptations with already established film versions and you’re faced with an unscalable feat.

In the case of IT, there are some seriously huge clown shoes to fill — how do you successfully adapt a revered classic of horror literature written by the king himself (Stephen King, that is)? How do you remake an existing adaptation, featuring one of the most iconic horror characters with an unmatchable performance by the legendary Tim Curry?

In October of 1988, young Bill Denbrough (Jaeden Lieberher, “Midnight Special”), sick in bed, builds a paper boat for his little brother Georgie (Jackson Robert Scott) to sail on the rainy streets of Derry, Maine. The love the two brothers share is immediately apparent; Georgie looks up to Bill, and Bill is clearly his hero. When Bill warns Georgie to be careful outside, you know that Georgie would never think of doing otherwise; however, in the subsequent well-known (and well-publicized) scene, Georgie’s boat gets away from him and slips down into the sewer where it’s retrieved by Pennywise the Clown. After a tense and terrifying encounter, Georgie disappears, adding to the growing list of missing children in their small town.

The following June, Bill and his friends escape the doldrums of school into the freedom of summer. While his friends are excited about dumping their leftover folders and notebooks into the trash, Bill remains preoccupied with finding his little brother, studying sewer blueprints and maps in his garage. Meanwhile, his friends are haunted by different fears: Eddie Kaspbrak (Jack Dylan Grazer, “Scales: Mermaids Are Real”) is tormented by a skeletal leper that chases him from a dilapidated neighborhood house; a twisted ghostly woman leers at Stanley Uris (Wyatt Oleff, “Guardians of the Galaxy Vol. 2”) from a painting in his father’s office; Beverly Marsh (Sophia Lillis, “37”) hears whispering children calling her for help from the drain in her bathroom sink; Mike Hanlon (Chosen Jacobs, “Cops and Robbers”) barely escapes the reaching ghostly hands from the site of a historical fire; and Ben Hanscom’s (Jeremy Ray Taylor, “Alvin and the Chipmunks: The Road Chip”) studies are interrupted by something treacherous in the storage room of the local library . . . not to mention the very real-life threats they all face from bullies Henry Bowers (Nicholas Hamilton, “Captain Fantastic”), Belch Huggins (Jake Sim, “Raising Expectations” TV series), Victor Criss (Logan Thompson), and Patrick Hockstetter (Owen Teague, “Echoes of War ”). The Derry kids — dubbed the Losers’ Club by Richie Tozier (Finn Wolfhard, “Stranger Things” TV series) — realize that there is a malicious evil in their small town, and that the adults will be of no help to them (in fact, they often just don’t see things happen . . . literally and figuratively). United in their fear of the terrifying clown they see around every corner, they decide their only defense is to venture after Pennywise together, hoping they can prevent any more children from going missing.

Stephen King’s classic New York Times bestseller IT is a doorstop of a book that stretches past 1000 pages, delving into brilliant characterizations, dreadful town histories, and bone-chilling encounters with an ancient evil that returns every 27 years. In 1990, Tommy Lee Wallace brought his version to the small screen in a four-hour miniseries that became the source point for many people with coulrophobia (fear of clowns). Andy Muschietti’s version of IT (this film being Chapter One) keeps the focus to the children of Derry, and the cast is pitch-perfect in their believability. One will be immediately charmed by each of the Losers’ Club members, and will feel strong nostalgic pangs for a simpler time of bike-riding and summer swimming trips. Their loyalty and love for each other is palpable, and the audience shares their faith in each other in their fight against the clown, masterfully recreated by Bill Skarsgård (“Anna Karenina”).

As incredible as Tim Curry was in 1990, Skarsgård embodies pure malevolence as Pennywise the Dancing Clown, and his antics are guaranteed to create a new generation of clown phobics. While the CGI is a tad heavy-handed here and there, the overall effect of this new Pennywise is extremely unsettling and viewers will be just as entranced by his eyes as any of the characters in the film. Pennywise is truly fascinating to watch, and astonishingly, you’ll find yourself hoping for more terrifying doses of Skarsgård’s performance.

As a huge Stephen King fan myself, I’ve been anxiously anticipating the release of this film, as I’m frequently disappointed by lackluster and rushed adaptations of his work (case in point, this summer’s “The Dark Tower”); however, I was marvelously satisfied with Muschietti’s version of one of my favorite novels. While there are definitely small changes made that I’m not crazy about (far too little of Mike Hanlon, guys . . .) and one major change in particular near the end that I’m rather intrigued by (if you already know the novel, you’ll know what I mean when you [don’t] see it), IT has delivered an outstandingly well-written nostalgia trip into our past summers and past nightmares.

The voices of the children whisper that they “. . . all float down here” and warn that “You’ll float, too.” They’re not wrong. You’ll float, all right; you’ll float out of the theater with grim satisfaction, anxious for Chapter Two. 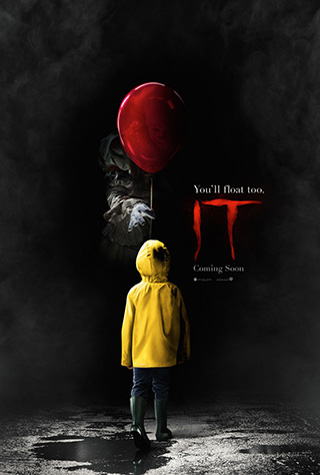