Headfort in Ireland is a boarding school with an illustrious history, long-held traditions and a burning desire to inspire the students to grow as people. With a curriculum comprised of reading, writing, arithmetic and Rock n’ Roll, John and Amanda Leyden have imparted knowledge and experiences onto multiple generations as the school’s most veteran professors. Neasa Ní Chianáin and David Rane (“Fairytale of Kathmandu”) begin their latest slice-of-life documentary with a dry humor and a stoic determination that stutters throughout most of the work but climaxes with a jubilation of personal growth. This does not imply that School Life has deep-rooted faults by the filmmakers resulting in this inconsistency, but more to the tempestuous nature of their subjects.

The film observes a year in the life at Headfort School, which is orchestrated in and about an 18th Century estate outside of Kells, Ireland. As multinational students and teachers interact and learn from one another, the embrace of long-held traditions and radical contemporariness makes for an intriguing social experiment. Though John and Amanda Leyden are the primary focus, those students they directly effect, and the teachers with whom they work, are constantly providing the fruits of their labors and frustrations. Reversely, with many of their students graduating and moving onto higher-level schools, the students’ impact on the pair is felt in each conversation they have while sharing a cigarette in one of the school’s upper floors about preparations for retirement. As they see the students growing up, they struggle to find what will keep them young.

The sweeping and crisp cinematography by Chianáin is beautifully astounding and easily the brightest highlight of the work; almost as if Andrew Dunn had decided to shoot this instead of “Gosford Park.” Whereas the picture is pretty, the momentum is irritatingly sluggish, and at times disjointed. Mirjam Strugalla’s (“The Stranger”) editing is very accurate in its mimicking the wandering minds of the children, but at times the lede was buried. Though complimented by Eryck Abecassis’ whimsical score and staunchly cinematographic without any interjection by the filmmakers as to intent, the film meanders too much; waiting for occasional punctuation of revelatory and inspirational moments. But, as aforementioned, this is due to the very nature of the subjects and not necessarily the filmmakers. The life in a boarding school is long moments of boredom punctuated with moments of joy, sorrow, terror and laughter; which is extraordinarily difficult to compose into an always engaging visual document.

Ultimately the documentary is an uneven affair, but it comes with serious merit by means of its stellar craft. The questions asked throughout the film of its subjects’ existentialism are valid and challenging. The burdens and triumphs of each student is easily relatable, and as they part the school for the next chapter of their lives, the film leaves the audience with a lingering sense of melancholy and hope as the young contrast with the old. Those who have made it their life’s pursuit to inculcate and galvanize young minds will find School Life to be a chronicle of many marvelous impacts that genuine involvement and a caring atmosphere can give to a developing mind, while being provided in a competent film. 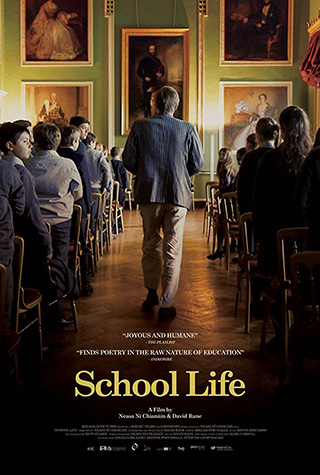