There aren’t many contemporary horror features — mainstream or independent — that one can boast as being pleasantly imaginative, thought-provoking or metaphysically intriguing. Writer-director-producer Michael Williams, breaks that notion by placing his profoundly frightening fingerprints upon the tension-filled, captivating horror suspense feature, The Atoning. Thoroughly engaging, contemplative and percolating with loads of mystique, Williams brings some much needed punch and polish to his low-key goosebumps thriller that legitimately keeps the viewer guessing on their toes. Refreshingly startling in its quieted chaos of eeriness and somber moodiness, The Atoning is surprisingly strategic in its creepy presentation (despite its familiarity in theme), while never falling victim to the overwrought “gotcha moments” seen countless times before in other exaggerated, bloated fright-fests.

The film opens with a darkened, well-kept suburban house inside and a howling thunderstorm outside. Vera (Virginia Newcomb, “Reparation”), a concerned mother, checks in on her son Sam (Cannon Bosarge, “When the Game Stands Tall”) in his bedroom as he sleeps. A mysterious intruder wanders into Sam’s room while he is sleeping and holds a gun to the child’s head. The scene suddenly switches to Vera waking up hysterically after hearing a loud POP sound. She casually strolls into Sam’s bedroom and cozies up in a chair in the corner of the room to keep her son company — no harm has seemingly come to Sam as he is quite peaceful among his soft snores.

There appears to be some tension between Sam’s parents Vera and Ray (Michael LaCour, “Texas Heart”). The scene that first introduces Ray has him reading a book while half-heartedly trying to make conversation with Vera. Another scene shows the frustration between Vera and Ray over a dripping kitchen sink faucet with Sam having to play mediator. Sam lightens up the mood by trying to make his father laugh with his funny food antics, but only Vera shows some amusement towards her son’s moment of levity. Vera and Ray do not sleep together anymore and their conversations seemed strained and inconsequential. Sam cannot help but notice the emotional divide and disconnection between his non-communicative parents. Finally, Sam confronts his mother about the possibilities that his folks are most likely heading for a divorce. Vera does her best to console her son that things will be fine.

Throughout the questionable proceedings the film begins to add in some inquisitive incidents that start off as innocently curious (a hideous painting that keeps finding its way back on the wall after it is taken down, a jigsaw puzzle worked on without any of the family touching the puzzle pieces, etc.) and off-putting (a dangerous sword that appears out of the blue, water faucets turned on suddenly, furniture whisked across the room, doors closing on their own, etc.), but ramp up to the increasing concerns of seeing unwanted visitors (perhaps intrusive spirits?) occupying the house.

The haunting run-ins include Ray witnessing a pretty woman disrobing to take a shower in his bathroom (and slip into bed with him) and Sam screaming at the top of his lungs at the sight of a little girl equally screeching back at him in his bedroom. As Vera finds her way again to a bothered Sam’s bedroom she informs him that his fear is nothing but a bad dream. Or is it more than what Vera is telling Sam?

Soon the tables will be turned as Sam, Vera and Ray will face a shocking revelation as to why all the creepy occurrences are unfolding. This eye-popping admission is especially astounding to Sam . . . not to mention it’s a juicy twist for the audience to chew on.

Interestingly, the big secret that enshrouds the beleaguered family does not stop at its reveal as Williams’ screenplay allows for further servings of atmospheric chills to pad the family’s sense of despair and detachment. Skillfully, Williams not only shows the biting psychology behind the apparitions, but also delves into the living by exposing the tainted aspects of Vera and Ray’s corrosive breakdown in marriage and parenting. In most cases, the characterizations in horror-themed features are disposable tools to move along the fright-induced frivolities. However, The Atoning is resourceful enough to play to the genuine tension and tawdry tics of its vulnerable characters beyond the heavy-handed usage of manufactured ghoul-fueled trickery.

The performances are strong, particularly in the case of Newcomb’s Vera. Newcomb’s take as a caring mother/disenfranchised suburban wife is terrifically affecting. She is very reminiscent physically of Sissy Spacek and displays a disciplined ability to act subtly exasperated while being a bridge of encouraging light to her child although within being emotionally dark. Bosarge’s Sam is highly-spirited as the precocious tyke at the center of his parents’ marital storm. Lastly, LaCour is effectively bewildering as the expressionless Ray trapped by his self-inflicted doubts and demons.

The cinematography (courtesy of Williams) is colorfully exquisite, capturing the crisp lighting through doors and windows and the intimate shadings of the elaborate, meticulously set house. Wendy Morgan’s set design is undeniably rewarding and Keatzi Gunmoney’s original score is smooth to the ears while promoting a calming sensibility to an otherwise edgy production.

The creative trappings behind The Atoning is refreshingly robust with its spiritual messaging of buried secrets and the confrontation of coming to grips with the harsh realities many are faced with at some critical point in their lives. Who knew that a well-made, small-scale horror fable could be as cautionary to the human condition as mischievous whispers are to the dark? 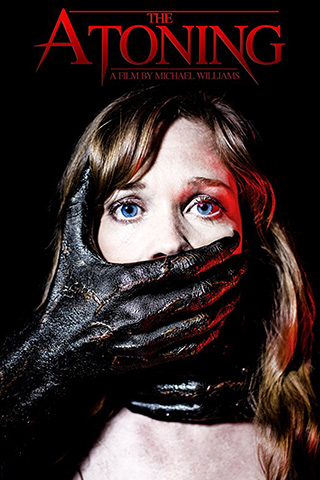