Though an estranged family tackling a bank heist in order to save a sibling is a recipe for interesting discourses by way of “Dog Day Afternoon,” The Vault, unfortunately is not that kind of film. Dan Bush cut his teeth co-directing, co-writing and co-editing the extraordinarily effective thriller/horror “The Signal,” followed by the overlooked yet well-constructed “FightFuckPray.” What is unfortunate is that his talent, understanding of potent tension-building, and terrific sense of space and time from his other projects has not bled over into his latest outing. While striving to be a gripping heist film garnished with horror elements, the filmmakers lose their way and end up with a generic mess of one-note characters and tarnished loose-end plots.

Alienated siblings Vee (Taryn Manning, “Orange Is the New Black” TV series), Leah (Francesca Eastwood, “Outlaws and Angels”) and Michael Dillon (Scott Haze, “Midnight Special”) have teamed together to rob a bank with Cyrus (Keith Loneker, “Lakeview Terrace”) a neo-nazi skinhead, and Kramer (Michael Milford, “Deserted”) a safe-cracker, in order to save Michael’s life from a local criminal outfit. The bank they take soon becomes more than they can bargain for as they take hostages as collateral (the lead played by James Franco, “Why Him?”); police close in from outside, something unknown starts taking them apart from within. As the robbers learn the bloody history of a previous bank robbery at the site that actually would make for a far more engrossing film than what audiences are given here, the situation becomes more dire as what is reality is questioned at every turn.

The overly-generic setup of The Vault could have been forgiven if it remained consistent; the first act sets up a stock-standard heist flick with predictable stereotypes for a main cast with no inclination that this will aim to shock more than with a jab at naturalism. However, later injecting elements reminiscent of “Silent Hill” and “Hellraiser” into an ominous basement level full of flickering lights and whispering phantoms might have seemed a good idea in theory. The execution is almost laughably tepid and self-restrained, offering lukewarm twists and panhandling for a scare. Flashbacks of the previous heist used as the catalyst for the preternatural behavior actually possess a far more formidably convincing life to them that begs to be explored further.

Manning, Eastwood and Haze are easily the best of the cast, though Haze plays his character like a discount Crispin Glover. But this doesn’t actually help the film, as their performances (along with everything else) are so scatterbrained that it is difficult to judge what the filmmakers wanted them to emote. Under-acted earlier sequences contrast harshly with later scenes where their performances are inordinately bombastic. Character traits are shifted as each plot point demands with many actions in the latter parts of the movie upsetting most of any established continuity. Contemplative sections barrel through characterization while easily predictable build-ups to jump scares heave on well past what they end up being worth. This confounded pile of movie (with consistently mucked up sound design) is composed through choppy and disjointed editing by Bush and “Hatchet” series editor Ed Marx, making focus increasingly difficult as the film drags out its 91-minute runtime. Though the cinematography by Andrew Shulkind is fair and balanced, it never takes risks to immerse the audience in this world, which subsequently neuters most of the scares.

Though peppered with hints of creative world-building and an adequate eye for capturing action, the movie is ultimately forgettable and is neither good nor bad enough to warrant repeat viewings. Though the team behind The Vault are some seriously talented individuals, this work is a resounding misfire that ultimately falls flat and concludes more lifeless than its unenthused ghost story. 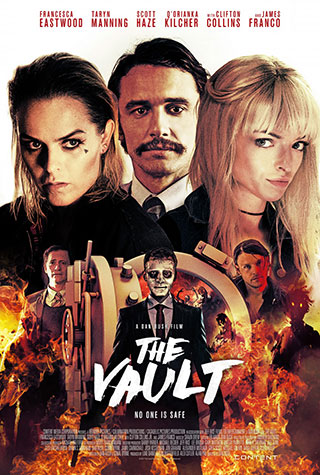