One of the most attractive and thrilling aspects of Tsugumi Ohba’s manga and Tetsuro Araki’s anime adaptation of Death Note, is that the persistent and ever-twisting mind games played against a stylish and neo-noir backdrop always seem to build on the one preceding it until it reaches unfathomable heights. Though there have been live-action adaptations released in Japan telling different versions, Adam Wingard’s live-action redesign is objectively not that story, even by his own admission. Separating the source material from this latest Netflix original offering is essential to enjoy it, but doing so inevitably doesn’t save it from overly-contrived characterization, massive plot holes and artistic flourishes that would be best described as inappropriate.

This film focuses on Light Turner (Nat Wolff, “Grandma”), the bright son of the police officer James Turner (Shea Whigham, “Knight of Cups”), who sells homework answers to other students. While standing up to bullies and getting a beat down for the cheerleader Mia Sutton (Margaret Qualley, “The Nice Guys”), he discovers a notebook (or does it choose him?) that enables the owner to kill anyone whose name is written in it with their face in mind. His hand is guided by the death god Ryuk (Willem Dafoe, “The Grand Budapest Hotel”) and co-opted by Mia to enact a personal crusade against those he deems as evil, in effect to become a benevolent god. After the deaths of over 400 criminals, throngs the world over have capitulated and worship Light and Mia’s moniker Kira. In reaction, the world’s most prolific and mysterious detective L (Lakeith Stanfield, “Get Out”) and his assistant Watari (Paul Nakauchi, “Dark Metropolis”) publicly commences a game of cat and mouse, pitting his own brand of justice and morality against Kira. Though in essence the same plotline as its source, this film version is drastically different in its characters, tone and execution.

For being such a bright student, Light is almost stupefyingly inane and consistently takes easily avoidable courses of action that trip him up. His motivations become less about justice and defending the weak, and more about putting Mia’s vagina on a pedestal. This is made painfully obvious during an extended montage consisting of criminal deaths, Kira worship circles and make-out sessions between Light and Mia. This culminates in a rain-drenched scene gaggingly reminiscent of “The Notebook.” Mia, reversely, is cold, calculating and methodical, embracing this newfound power as a means to enlarge her ego and influence. And that’s pretty much all that can be employed to describe her character, as she never undergoes any particular arc. Collectively, the pair make up a threadbare patchwork of Light Yagami from the original “Death Note,” without the charisma or deductive brilliance. They come off more as edgelords who complain society doesn’t get them.

On the flip side, the portrayals of L and Ryuk are actually quite astounding, easily surpassing every live-action version that has come before. Stanfield and Dafoe are perfect casting choices. Stanfield obviously put significant research into his role and possesses a thorough understanding of what motivates and affects his character, each moment on screen he holds with confidence and genuine investment. Though his attire for the most part is too obvious an attempt at being “cool” and “mysterious” to where it becomes kitsch, he makes it work. Dafoe’s signature voice and motion captured Green Goblin grin always delights and intrigues, with him obviously enjoying the role every step of the way. This Ryuk is played as a conniving, demonic puppeteer with a deep-set love of messing with the minds of the death note owners while fueling an addiction to apples. This is dramatically different than the original shinigami, with the exception of the fruit fanaticism and that at times Ryuk tempted Light with offers evocative of Mephistopheles in Johann Wolfgang von Goethe’s “Faust.” This isn’t necessarily bad. In the context of this particular story, complemented by glossy cinematography, the part is executed admirably.

Though the camera work and lighting design may be glossy, and the gore and special effects are bloody and satisfying, its effectiveness is somewhat muted by an anemic color scheme. Much like what plagued movies like “Bad Kids Go to Hell,” the images never leave the safety of a dull washed-out palette. In turn, the film’s visual flair crafted by David Tattersall is unimaginative and stagnant, offering nothing to immerse the audience. Though the pacing and rhythm throughout the movie is intriguingly unique and solidly constructed by award-winning editor Louis Cioffi, it isn’t enough to save the movie. However, the utmost sore thumb of the whole experience that is Wingard’s vision is the unseemly 1980s synthpop and soft rock score, as if it’s trying to be an edgy preternatural “Breakfast Club” (hence the “Bad Kids Go to Hell” comparison). Even divorced from the anime adaptation’s absolutely intoxicating and deeply layered score by Toshiki Inoue, the music throughout this film is either underwhelming or so poorly placed that it eventually caused my giving up on the film redeeming itself in any way as it concluded.

Fans of the series will deplore this Death Note, haters of the series will find this inconsequential, and those who haven’t had previous experience will most likely forget this film in the long run. In addition to being a weak bastardization of the original work, this film does not possess the chops necessary to be considered a strong stand-alone piece or an original story. It simply is a hodgepodge of mismatched elements that all belong in different movies, and together make for a ridiculous, over-the-top romp built on illogical contrivances. 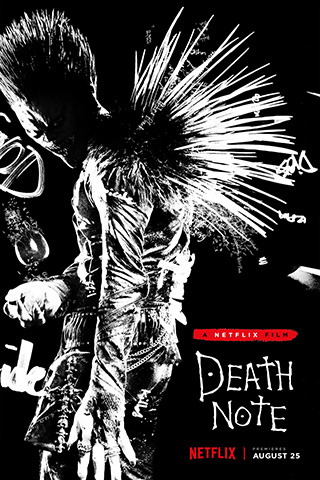