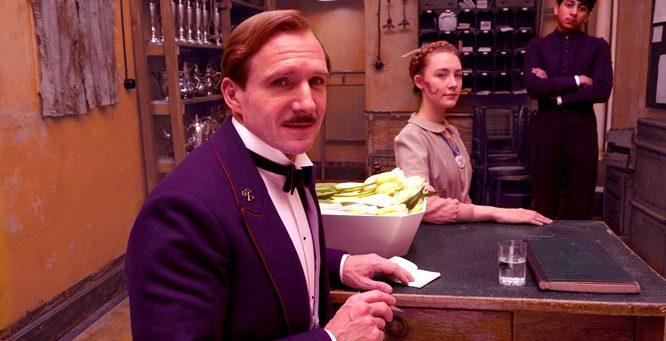 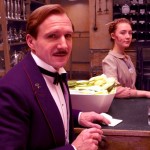 Wes Anderson’s filmmaking fingerprints are distinctive, to say the least. His delicate touch is visible in every frame of his carefully constructed pictures, as if he’s built each cinematic world entirely with his own two hands. It’s impressive, but occasionally the result is too mechanically quirky for its own good. And it often feels like the cat’s out of the bag, that Anderson’s tricks are technically complex, but statically predictable. Of course, Anderson is always the articulate artisan and apparently still capable of great surprises, so his latest movie feels less like a retread of his past work and more like an immaculate culmination of everything he can do so well, done better and more exquisitely than ever before. Plus, just for good measure, this one actually has a bagged cat in it.

The Grand Budapest Hotel chronicles the rise and fall of a once-decadent establishment that hit its peak of gaudy glory on the eve of World War II. Told as one man’s story within another man’s story about another man’s story and all wrapped up in a book, the pic is a fruitful farce that mixes Anderson’s trademark whimsy with a dash of dark humor. The star is ostensibly Gustave H. (Ralph Fiennes, doing damn near the exact opposite of what he’s done throughout most of his career), the beloved concierge of the Grand Budapest, whose generous smile and general well-roundedness makes him a curiously lovable and slickly entertaining subject.

In addition to running the hotel, Gustave delivers nightly sermons and routinely exhibits a penchant for rich old woman (and blondes only, in what may be perceived as a sly nod to Hitler’s impending obsession with an Aryan race). The main narrative is concerned with one lover in particular, the ill-fated Madame D. (a delightfully latex-y Tilda Swinton), whose death causes a miniature war to erupt around her will. Gustave gets embroiled in the whole mess, which was clearly his hope all along, but he gets more than he bargained for when he incites the ire of such villains as Madame D.’s son Dmitri (an exasperated Adrien Brody) and his crony Jopling (Willem Dafoe, somehow managing to look more vampiric here than when he actually played a vampire).

It’s all a setup for a special brand of extreme silliness where Anderson puts his own spin on such cinematic sequence staples as a prison break, a snowy downhill mountain chase, and a raucous shootout in close quarters. That each of these sequences (and every other shot, too, of course) is captured with Anderson’s precise, detailed camera work adds to the luxuriously intoxicating beauty of it all. There are dolly shots galore and characters in action are almost always centered in the frame, impossibly, perfectly. Anderson’s eye has never been more ambitious, more overwhelmingly opulent. His color palettes are usually quite refreshing and full of soft, soothing hues, but the shades of pink and orange and blue on display in The Grand Budapest Hotel are the most deliciously enticing Anderson has ever cooked up.

Gustave’s adventures are wild and weird as seen within the context of this visually astonishing world, but the real protagonist of the piece is actually Zero (Tony Revolori in his younger years, F. Murray Abraham in his older ones), a lobby boy at the titular hotel who operates as Gustave’s sidekick and confidant. He’s our eyes and ears on the ground of this sumptuous landscape and his older self crisply narrates portions of the picture. Fiennes is on fire here, so Revolori just has to grab at his comical coattails and hold on, but he really owns his role and makes Zero a rather fun and intrepid hero, complete with a tender love story that matches him with the always wonderful Saoirse Ronan. 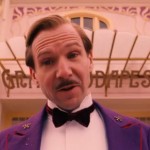 The usual supporting players are all here, doing their regular thing, which basically amounts to maintaining consistency throughout their pal director’s filmography. Jason Schwartzman, Owen Wilson, and Bill Murray all make cameo appearances that feel more like an obligation than a necessity, but they don’t detract from the experience. It’s just that the newcomers have far more to do here, so the spotlight rightly falls on Fiennes, Revolori, and Ronan, as well as someone quite unexpected like Jeff Goldblum, who would be nearly unrecognizable under his elaborate facial hair if it wasn’t for his iconic voice. The fresh faces at the Grand Budapest are certainly the difference maker in this effort, though even with that in mind, it’s tempting to hope that Fiennes will become an Anderson regular. His comic timing and the filmmaker’s written wit prove to be an unbeatable match.

Anderson’s trademark style has never been more instantly recognizable than it is here, but that familiarity doesn’t manifest itself in any form or fashion that feels recycled. There’s an intrinsic magic at work in his latest pic that owes something to all aspects of the movie, from the inspired performances to the jaw-dropping production design. The Grand Budapest Hotel is an Anderson eruption, an awesome display of his oozing creativity coating every frame in gentle wisps of gourmet candy-colored imagination. Okay, so maybe it’s not exactly an eruption. It’s something much sweeter: Celluloid cake that tastes as good as it looks. 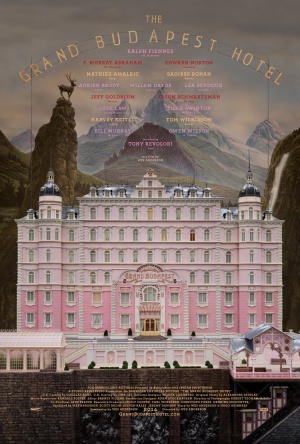