In 1973, if any 16-year-old boy were to be kidnapped on the streets of Rome, it might warrant a brief mention in the papers. If the boys’ last name was Getty, however, it would be a major story followed closely throughout the world. Written by David Scarpa and based on John Pearson’s book “Painfully Rich: The Outrageous Fortunes and Misfortunes of the Heirs of J Paul Getty,” 80-year-old director Ridley Scott’s (“Alien: Covenant”) All the Money in the World tackles such an explosive story, the kidnapping of John Paul Getty III (Charlie Plummer, “The Dinner”), grandson of oil tycoon John Paul Getty (Christopher Plummer, “The Man Who Invented Christmas”), and a billionaire said to be the richest man in the world.

At the last minute, sexual assault charges led Scott to replace Kevin Spacey with Christopher Plummer in the role of Getty and reshoot the role in ten days to qualify for a December release and it is a seamless transition. Nominated for a Golden Globe for Best Supporting Actor, Plummer’s convincing performance makes us wonder, however, why he was not originally chosen for the role. Though the film is not an in-depth characterization of John Paul Getty and is not designed to be, it succeeds as an edge-of-the-seat thriller that will keep you engaged throughout. Snatched off the streets of Rome by the Calabria-based mafia led by the tough, but ultimately sympathetic, Cinquanta (Romain Duris, “In the Shadow of Iris”), the long-haired Getty is taken to a remote location in Southern Italy.

A flashback to the 1960s provides a thin back-story showing how the oil magnate’s son John Paul Getty II (Andrew Buchan, “The Deaths of Ian Stone”) was invited to Rome and offered the position of Vice-President in his company. For Getty II, it was a welcome gesture after years of neglect, but the fact that he had to sink or swim in an industry he knew next to nothing about eventually caused a breakdown and the dissolution of his marriage. The flashback also shows the developing bond between Getty and his grandson who he gives an Egyptian sculpture allegedly worth 1.2 million dollars, but later shown to be worth no more that a thrift store trinket.

The young Getty learns, however, that his grandfather is the reincarnation of the Roman Emperor Hadrian, considered by some to be a “humanist” despite his being responsible for the deaths of 580,000 Jews during the Bar Kokhba revolt. Days after the abduction, the boy’s mother Gail Harris Getty (impeccably performed by Michelle Williams, “Wonderstruck”), receives a ransom demand for 17 million dollars, a tidy sum for most people, but chump change for Getty who was worth close to an estimated two billion dollars. Letting the kidnappers know that she does not have that kind of money or anywhere close to it, she visits her former father-in-law, the one person she knows who does.

Doing his best Ebenezer Scrooge imitation, the self-absorbed billionaire refuses to pay the ransom, believing that the younger Getty may have faked his kidnapping to extort money from him. Getty also says that if he were to give in to the ransom demands, his 14 other grandchildren would become prime targets, a not unreasonable assumption but cruel under the circumstances, especially given his spending millions of dollars on a new painting. Ostensibly feeling like he should do something, Getty appoints business associate and former CIA operative Fletcher Chase (Mark Wahlberg, “Patriots Day”) to help Gail secure his grandson’s release with the real or imagined assistance of the Italian police.

Like a desirable piece of property at a slave auction, Paul is sold to Mammoliti (Marco Leonardi, “The Space Between”), a mafia kingpin higher up in the chain. Four months later, a box is delivered to Getty containing a lock of his grandson’s hair and most of his ear, brutally detached in an unwatchable scene. As the haggling continues, Scott’s no-nonsense approach builds the tension that pits a mother’s determination against the will of the privileged and corrupt. While in some quarters Getty will be remembered as an art collector who established the Getty Museum in Los Angeles, Plummer’s portrayal of a man without qualities reminds one of the biblical admonition, “What shall it profit a man if he shall gain the whole world but lose his own soul?” (Mark 8:36). The phrase, however, presupposes that the man in question is even aware that he has a soul to lose. 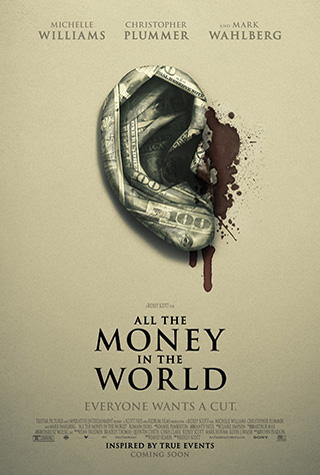