In Kedi, Ceyda Torun’s documentary about the cats of Istanbul, Turkey, one interviewee says that cats can be “cold and abrasive” and that a relationship with a cat is like “having a friendship with an alien.” Not having too many friendships with aliens lately, I cannot comment on that, but it is clear that, whether or not you are a cat lover, Torun’s affectionate portrayal of the distinct personalities of Istanbul’s cat population is intoxicating. There are no cats on a hot tin roof, but there are plenty of cats in the city and they can appear almost anywhere. Distinct personalities or not, the film’s main focus is on seven cats (Gamsiz, Deniz, Aslan Parçasi, Bengü, Psikopat, Duman, and Sari) and they are indeed unique and adorable.

While we know that humans sometimes act like cats, the film’s assertion that the cats are just like us is somewhat dubious. With a little imagination, however, we can see some remarkable similarities. Sari is known as “the Hustler” who makes the rounds every morning, roaming the streets, shops, and houses to corral some food to bring back to her kittens. The black and white Psikopat is called “the Psycho,” a familiar label often used in our political culture today. Psikopat has earned this moniker because she is aggressive, brooks no incursions on her territory, makes sure that she eats first before leaving some food for her husband, and chases away cats that make a play for her husband.

Gamsiz is called “the Player,” another black and white cat who paws at the window of a bakery everyday looking for goodies and charms a woman who lives on the second floor of her building. Gaining entrance by sitting sideways alongside the glass door of her balcony and politely raising his paw in the air, the woman says that she cannot refuse the adorable Gamsiz. Taken care of by the community, we can also learn much about the benefits of compassion and caring on our own health and well being. One man tells us that his taking care of stray cats near the harbor helped him regain his sense of balance after he had suffered a nervous breakdown, saying that cats “remind us that we are alive.”

Caring for the cats is not a frivolous pastime for the residents of Istanbul. One handwritten sign warns people about removing the water cups nearby. “These cups are for cats and dogs,” the poster says. “If you don’t want to be desperate for a drink of water in the next life — don’t touch these cups.” As many cats as there are in the city, there are also plenty of stories. A sailor whose ship was destroyed during a storm claims that a cat pointed him to a lost wallet filled with enough money to repair his ship, though it would have been more impressive if the man had returned the wallet to its rightful owner.

One man has a religious approach. “Dogs think people are God, but cats don’t,” he says. “Cats are aware of God’s existence. Cats know that people act as middlemen to God’s will. They’re not ungrateful, they just know better.” Kedi is a love affair not only with the cats, but with the city of Istanbul itself. Remarkably photographed by cinematographer Charlie Wuppermann (“Blood Moon”) with the assistance of the lovely score of Kira Fontana, the camera takes us to side streets, bustling markets, and lively neighborhoods that are not on the list of recommended tourist attractions. “I really wanted to show the world that Istanbul isn’t like what we see in news headlines or a Bond movie or through a tour guide,” Torun says. “Capturing the real city was very important to me,” and the film indeed gives us a new sense of the city’s beauty and the diversity of its people.

Torun reports that since the film was made, the tramline has been paved over, buildings have changed and, because of gentrification, many of the charming spots seen in Kedi may have already disappeared. Whatever the reality of the city’s changing profile, the warmth and the film’s message of caring will continue to resonate. 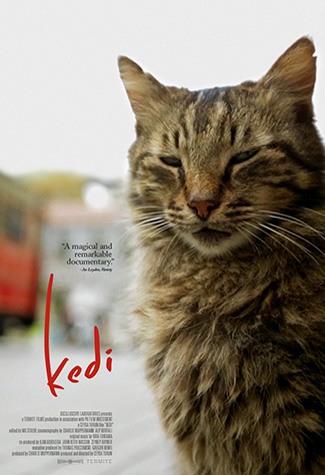